4 University of Idaho college students killed in "worst crime we've ever seen". No suspects, no leads 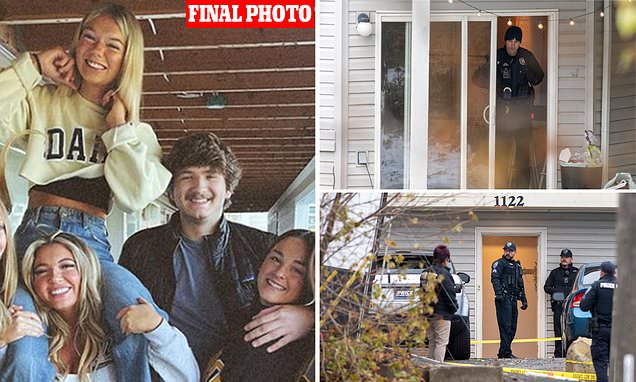 Idaho students might have been killed in 'burglary gone wrong'

Ethan Chapin, 20, Madison Mogen, 21, Xana Kernodle, 20, and Kaylee Goncalves, 21, were all found dead in the house they shared in Moscow, Idaho, on Sunday. 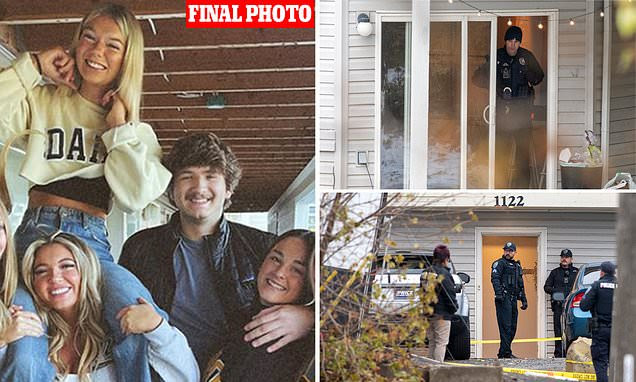 Police discovered the students' bodies just before noon Sunday as they responded to a report of an unconscious person at a home steps away from the Moscow, Idaho, campus. The victims were identified as Ethan Chapin, a 20-year-old from Conway, Washington; Madison Mogen, a 21-year-old from Coeur d'Alene, Idaho; Xana Kernodle, 20, from Avondale, Arizona; and Kaylee Goncalves, 21, from Rathdrum, Idaho.

The four University of Idaho students who were found dead in off-campus housing were identified on Monday as Madison Mogen, 21, top left, Kaylee Goncalves, 21, bottom left, Ethan Chapin, 20, center, and Xana Kernodle, 20, right. They are pictured just hours before their untimely deaths

Mogen and Kernodle were in the same sorority. Goncalves was a member of a different sorority. Chapin was a fraternity member, according to University of Idaho President Scott Green.

Investigators think an edged weapon was used in the deaths of four University of Idaho students, police said Tuesday. Officials said all four students, who were found dead inside a home near campus on Sunday, are considered victims in the case.

No weapons have been located thus far, police said, but based on preliminary information, "investigators believe that an edged weapon such as a knife was used," Moscow Police Captain Anthony Dahlinger said in a statement. There are no suspects in custody


"Details are limited in this investigation," the Moscow Police Department (MPD) said in a Monday afternoon statement. "Currently, there is no one in custody." 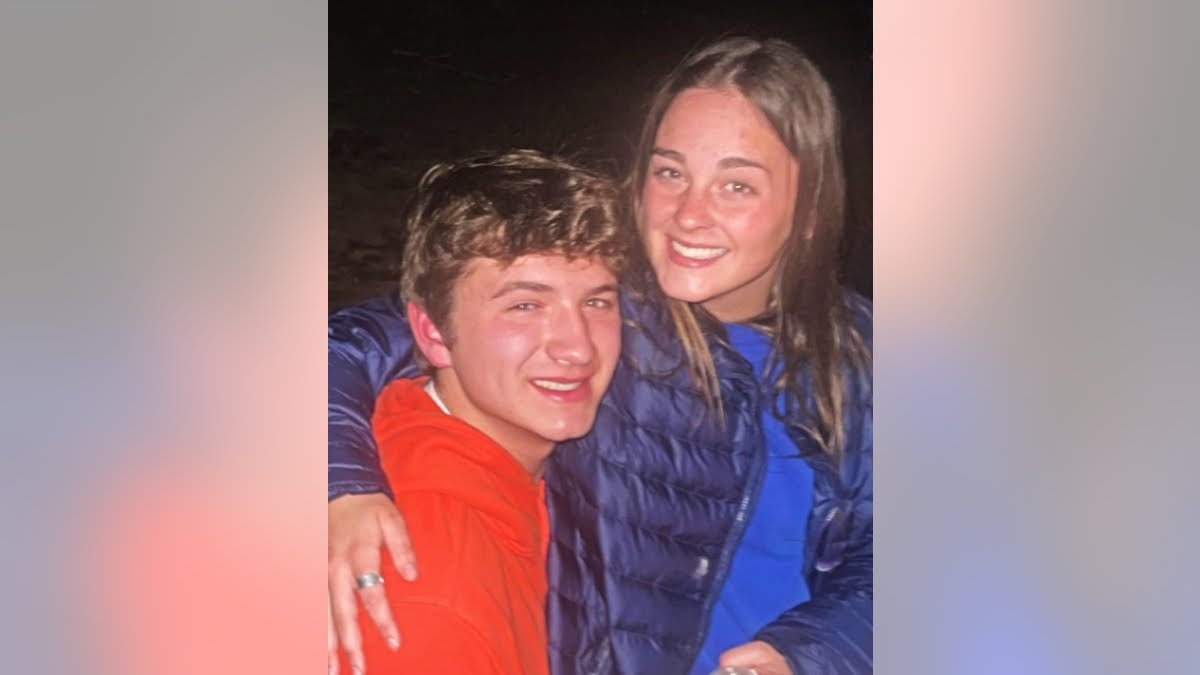 The four victims appeared to be friends based on their social media interactions and posted a photo with two other friends just hours before they were found dead on Sunday.


The Moscow Police Department has labeled the deaths as "homicides" but maintains there is not an active risk to the community.
Art Bettge, mayor of Moscow, called the deaths a 'crime of passion' and 'senseless acts of violence,' but also said they may have been killed in a 'burglary gone wrong'.

Police are still trying to narrow down exactly what happened, he said.

'It’s one of any of a plenitude of possibilities, including burglary gone wrong, robbery gone wrong… any of those is a possibility and not one to the exclusion of others,' he told Fox News.

University of Idaho president Scott Green said the students were all "killed" under tragic circumstances, and Moscow Mayor Art Bettge said all four of the students were considered victims in the investigation. Moscow Police Capt. Anthony Dahlinger told the Idaho Statesman Monday night that none of the deceased students are believed to be responsible for the deaths.


The students likely died between 3 and 4 a.m., but they weren't discovered for hours, Bettge said.

"The police got there at noon, nothing happened in the interim and nothing happened afterward, so it seemed to be a unique occurrence that was not apt to be repeated," said Bettge. That timeline helped authorities determine that there was not an active risk, he said.

Dahlinger declined to confirm or deny Bettge's description of the timeline.

Still, the lack of information about the cause of deaths - and the fact that police have said there is no one in custody - had many parents worried about campus safety and some students leaving for Thanksgiving break early.


Brian Nickerson, the fire chief of the Moscow Volunteer Fire and EMS Department, said police were the first to arrive at the home. The first responders from the fire and EMS department didn't go inside or transport anyone from the scene, Nickerson said.

The city of Moscow is a close-knit college town nestled in the rolling hills of north-central Idaho, about 80 miles southeast of Spokane, Washington.
Last edited: Nov 19, 2022
J

Moscow Police Capt. Anthony Dahlinger told the Idaho Statesman Monday night that none of the deceased students are believed to be responsible for the deaths.

What the hell is going on here? 4 people murdered yet there’s no cause for concern. These people are insane in Idaho.

Coli detectives get to detecting

Wtf is an edged weapon?

In before: R.I.P., waste of some damn good PAWGS

RIP to the dead. Peace to their families.
As someone who has a daughter away at college, I cringe every time I read something like this.
Gotta admit that this is the most Idaho shyt I could imagine, because I’ve never been to Idaho. 100% positive that whoever killed these 4 is white though.

I’m fukking loss after seeing the police said no need to panic or concern, just a passion of love case, that’s it

Tax dollars going to waste I see as usual

DamienWayne said:
Coli detectives get to detecting
Click to expand...

I feel like that had to be slipped something to sedate them. Who is waiting around while everybody else is getting hacked? Feel like someone would've woken up from the screaming if the excuse is just they were sleeping so they didn't hear

King Poetic said:
I’m fukking loss after seeing the police said no need to panic or concern, just a passion of love case, that’s it

Tax dollars going to waste I see as usual
Click to expand...

Usually it means that the individuals who were killed were targeted....still doesn't make sense though

King Poetic said:
I’m fukking loss after seeing the police said no need to panic or concern, just a passion of love case, that’s it

Tax dollars going to waste I see as usual
Click to expand...

At this point, it would behove the parents to obtain legal counsel

I do think it's crazy how this is what they are releasing publicly.

My theory is that an ex of one of the single girls there came thru on some crazy stalker ish. I still can't piece together the reported call of an unconscious person tho... were they the only one visible from the exterior or something?
You must log in or register to reply here.
Share:
Facebook Twitter Reddit Pinterest Tumblr WhatsApp Email Share Link
Top