Dog Gets Abandoned For Being Gay

A dog abandoned at a North Carolina animal shelter after his owners thought he was gay was adopted by an openly gay couple on Tuesday.

Fezco, believed to be around 4 years old, was left at Stanly County Animal Protective Services. Fezco gets along well with both humans and other dogs, according to the shelter's Facebook page.


"It could just be he's trying to assert dominance over the other dog," said Rozycki.

The behavior also could be attributed to dogs always having a pecking order in a multi-dog environment and them knowing where their pecking order is, Rozycki said.

Steve Nichols and his partner John live in Charlotte and have been together for more than 30 years. They adopted Fezco and renamed him Oscar, after popular gay writer Oscar Wilde, according to the couple.

“It’s just such a silly reason to turn in a dog,” Nichols told WCCB Charlotte. “We just thought it would make sense for the gay dog to be adopted by a loving gay family.”

Dog abandoned at North Carolina animal shelter for being 'gay' gets adopted by gay couple (msn.com)

Story is probably made up ,the agenda.

Still Benefited said:
Story is probably made up ,the agenda.
Click to expand...

them fags have no shame whatsoever

damned mine eyes, DAMNED mine eyes!!

He wasnt humping other male cats.

You was tagged in the other thread creh

them fags have no shame whatsoever
Click to expand...

Just think about this story. The shelter says how stupid it is to give away a dog for thinking its gay. But then they advertise the dog was thought to be gay on facebook. Then a couple comes foward and says "We're gay,can we have that gay dog we will name after gay man?". You know what,this is just the type of goofy shyt that apparently comes with being gay,so it probably is true

He was humping a male man 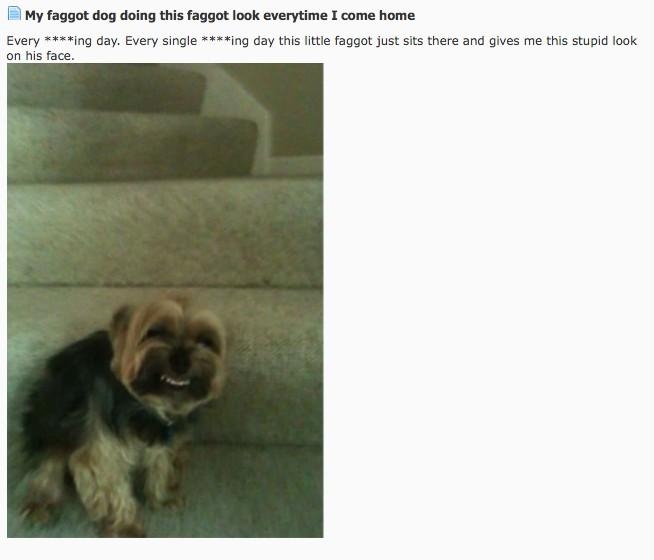