Probably the wildest day of the tournament. Triple plays, 9th inning comebacks, the unbeatable favorite getting beat...wish I had someone to talk about it with

. The Osaka Toin game might actually make US media like Jomboy's YT channel or something. The Ohmi/Takamatsu game was also one of the best of this year's tournament.

Rest day tomorrow and then semifinals the day after. Sendai vs. Ohmi and Seiko vs. Shimonoseki. Seiko and Ohmi have been riding their ace pitchers hard, a lot of innings with high pitch counts. Will they go again in the semifinals or be saved for the final...or both?

Final four starts in a little over half an hour.

Semifinals were pretty trash, none of the games were competitive. First game was a major blowout with Sendai Ikuei winning 18-4 over Seiko. They scored 11 runs in the 2nd inning, which basically ended the game right there. In game 2, Shimonoseki jumped on Ohmi's ace Yamada early and eventually knocked him out the game.

Seiko and Ohmi had been relying heavily on their ace pitchers throughout the tournament and I think their high pitch counts caught up with them. Seiko's Sayama had thrown 421 pitches in 30 innings (4 games) and Ohmi's Yamada had thrown 512 pitches in 31 innings (4 games) leading up to their elimination games. Add in the prefectural tournaments and they've probably thrown nearly 1000 pitches in under a month - absolutely ridiculous workload.

Sendai Ikuei and Shimonoseki play tonight at 10:00PM PST. Hoping for a close game like the quarterfinal matches. Sendai is probably the better team but Shimonoseki is definitely the hottest, having knocked out the 2 Spring tournament finalists in consecutive games. Thanks for reading my blog these past 2 weeks.

Do the Japanese people make brackets and bet on this tournament?

DoubleClutch said:
Do the Japanese people make brackets and bet on this tournament?
Click to expand...

I'm not sure about brackets. It might be hard to do because they redrew the bracket at the Best 8 quarterfinals, but I don't know for sure, that's a good question.

There is definitely betting though, I know I read an article about illegal underground betting on the games. I don't know for sure if legal betting is allowed or not.

My man just won the championship with one swing. He'll probably remember that for the rest of his life. 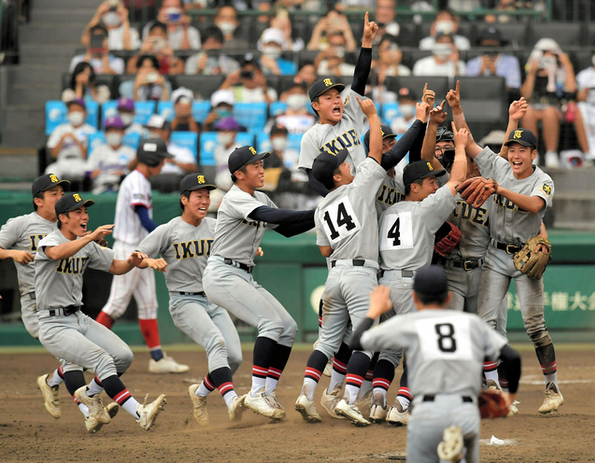 Great game despite the score. The kid who hit the grand slam was a bench player who didn't even play during the prefecture tournament. Winning coach was in tears after the game. Great tournament overall, lots of upsets, walkoffs, and comebacks. Hope it was interesting for anyone that watched.
You must log in or register to reply here.

Sunday at 9:44 AM
Cattle Mutilation