L.A. will shelter more homeless people to end major lawsuit. But how many?

L.A. will shelter more homeless people to end major lawsuit. But how many? 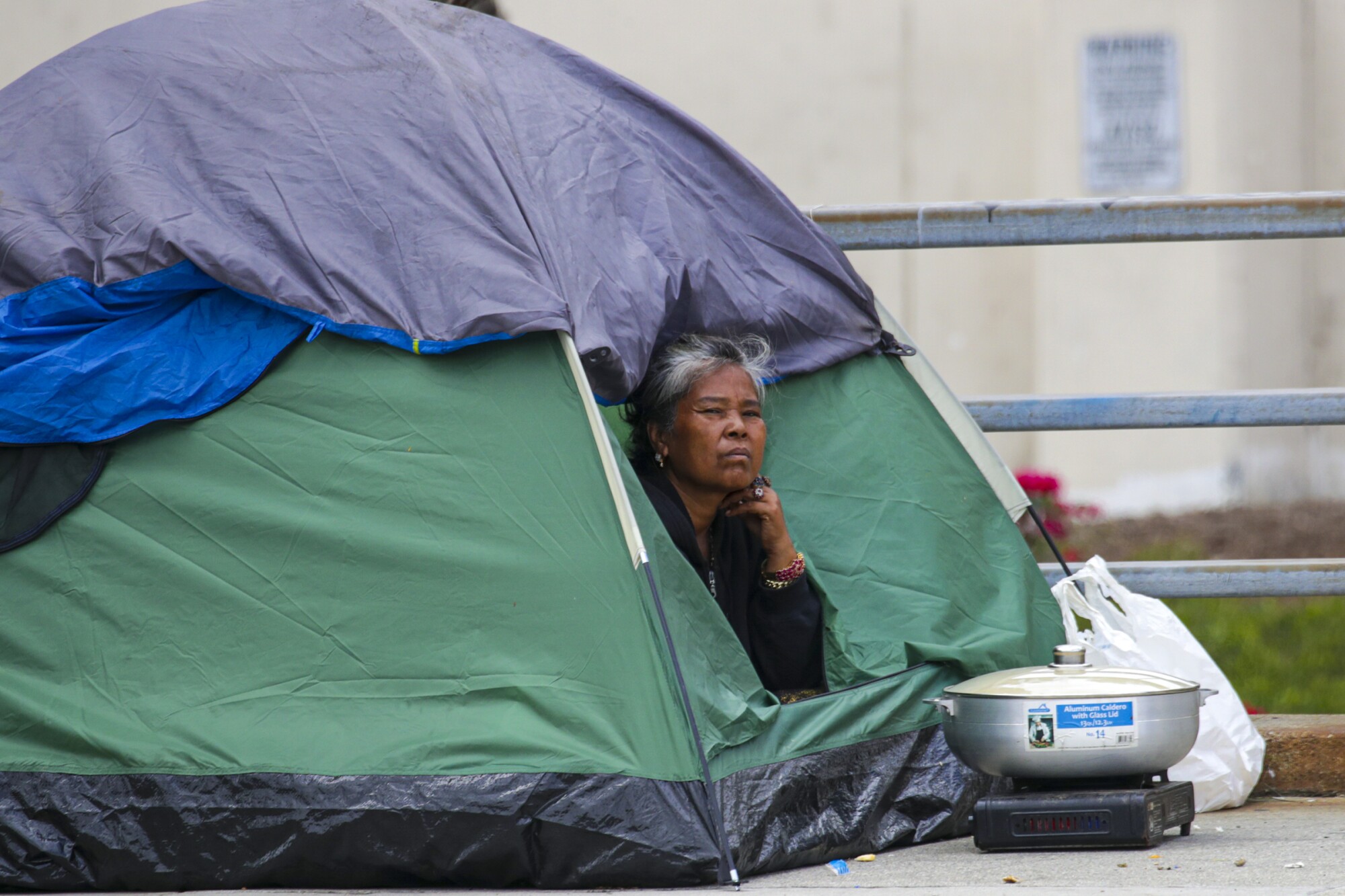 Los Angeles has agreed to build potentially thousands of new beds and housing units under the terms of a legal settlement announced Friday, apparently bringing to an end a key portion of a contentious, long-running federal lawsuit over homeless housing and enforcement on skid row and across the city.

The proposed agreement between the L.A. Alliance for Human Rights and the city would require opening enough beds over the next five years to accommodate 60% of the city’s unsheltered population in each City Council district.

City officials say that about 13,300 beds of various kinds are already being planned, including permanent supportive housing — through Proposition HHH — as well as beds that people can stay in temporarily.

As a result, it remains unclear how many new units not already in the pipeline and counted by the city will be required to reach the 60% goal. But city officials estimate that all of this building, including what is already planned, will cost between $2.4 billion and $3 billion over the next several years.


The exact number of beds required will depend on the results of January’s point-in-time homeless count, which will be released later this spring. Based on the results of the last count in 2020, city officials estimate they would need to have at least 14,000 beds open. 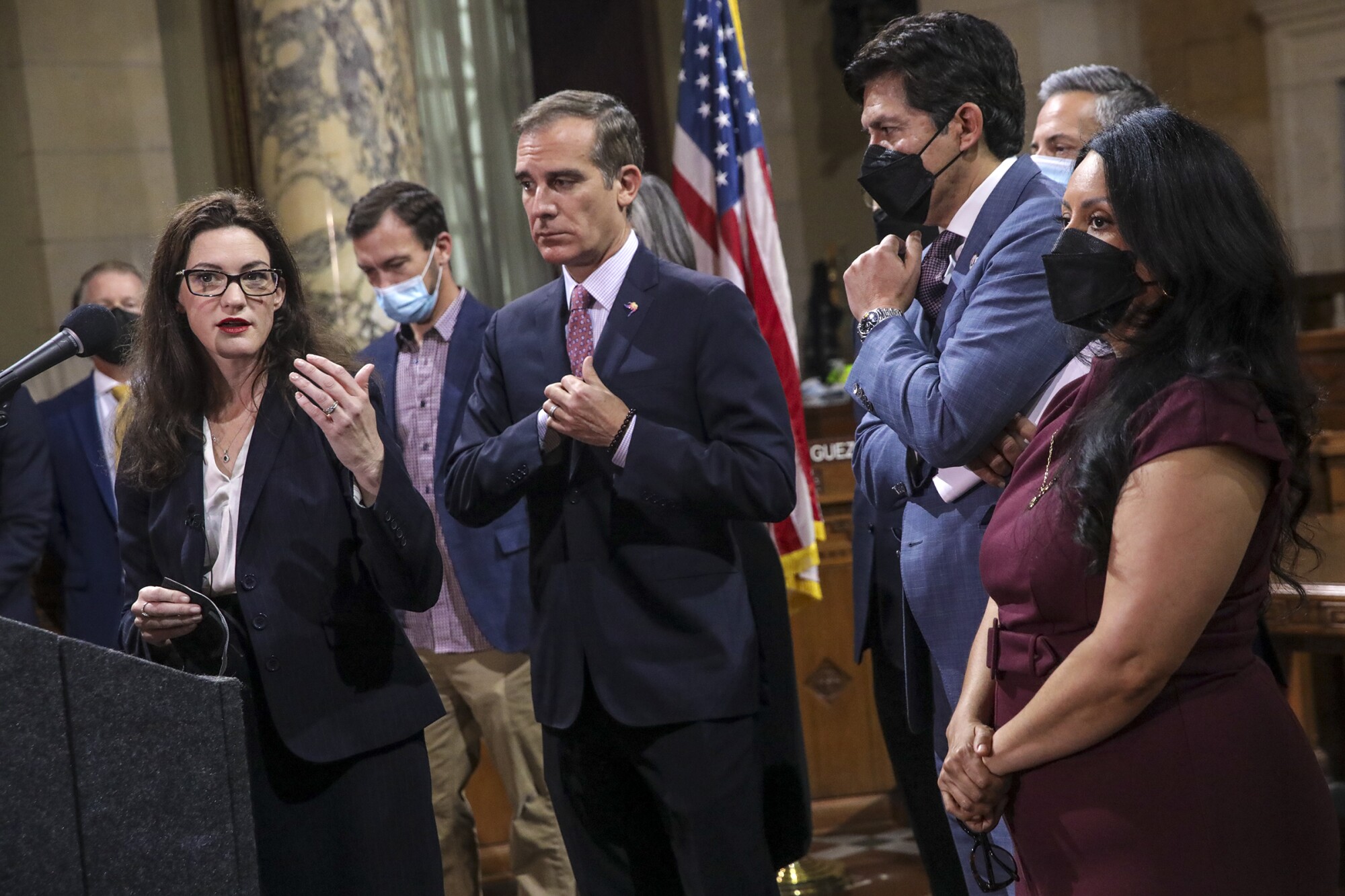 L.A. Alliance for Human Rights attorney Elizabeth Mitchell, left, and L.A. Mayor Eric Garcetti, joined by City Council members, announce on Friday a settlement to provide more shelter for homeless people in the city .
(Irfan Khan / Los Angeles Times)
By agreeing to build potentially thousands more beds for homeless Angelenos, city officials believe it will give them the ability to enforce anti-camping measures more broadly once offers of shelter have been made. The 2020 count found about 41,000 homeless people in the city. About 70% of those people were unsheltered, living outdoors or in cars.

Notably, Los Angeles County, which is also a defendant in the case, is not part of the settlement announced Friday. City officials said the county should be responsible for housing and providing services for thousands of the sickest and most vulnerable people living on the street.

By seeking to shift responsibility to the county for sheltering this population, as the settlement lays out, the city effectively reduced the number of homeless people it would be responsible for housing. 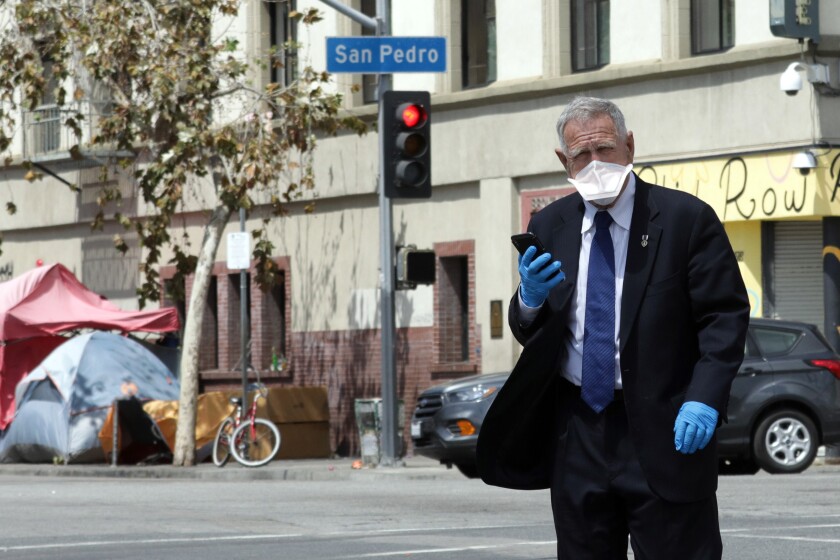 
Since the lawsuit was filed in March 2020, at the onset of the COVID-19 pandemic, the case overseen by U.S. District Judge David O. Carter has sprawled in several directions — owing partially to Carter’s wandering interest and frustration with various facets of the region’s homelessness response.

The plaintiffs — who are a group of mostly downtown residents, business groups and some formerly homeless people — alleged that the city and county had failed in their duty to protect public health and safety and to provide shelter to people living on the streets. Resolving at least part of the case was hailed by city leaders. 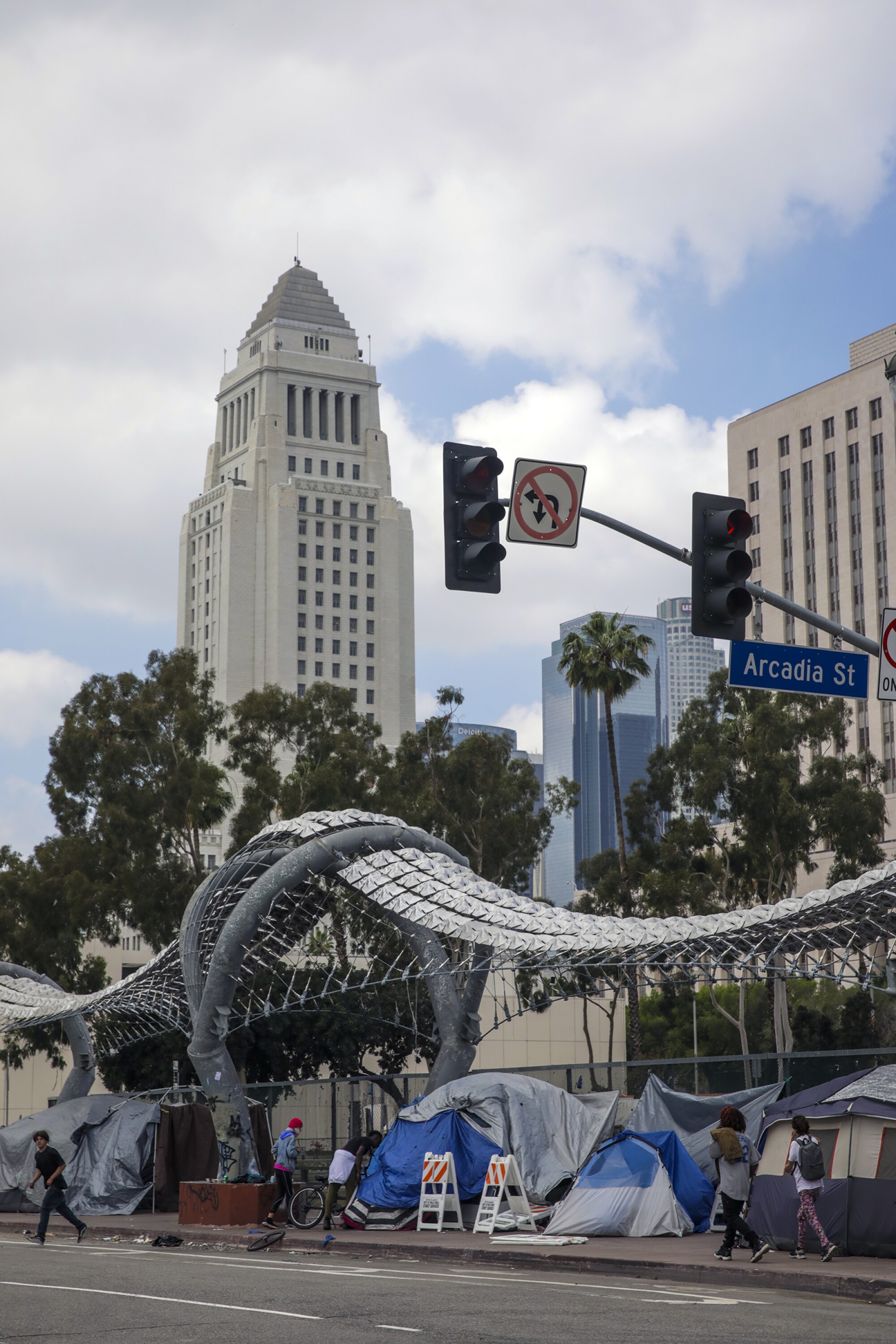 A homeless encampment can be seen against the backdrop of City Hall in downtown Los Angeles.
(Irfan Khan / Los Angeles Times)
“It’s a big deal,” Mayor Eric Garcetti told The Times. “Hopefully it inspires everybody to really reach beyond our grasp. It’s the only way we’ll solve this.”

The proposed agreement doesn’t dictate which proportion of the new beds need to be permanent rather than interim housing units — such as shelters or tiny homes, which have sprung up across the city in recent years. The settlement still needs to be approved by the City Council and Carter, which will occur over the next few weeks.

These beds would be intended for people who are deemed “low acuity,” meaning their physical and psychological challenges won’t require a higher level of care, said City Council President Nury Martinez.

Martinez said the responsibility for helping people who are overcoming a substance use disorder or have a serious mental illness and getting them support in sober living homes or other facilities should fall to the county.

“The person who is mentally unable to take care of themselves — how is the city supposed to step in to deal with that issue?” Martinez said. “We do not run hospital beds. We’re not clinicians. We’re not social workers. The type of housing that individual would need is the responsibility of the county.”

Invisible in plain sight | Homelessness and the pandemic

The goal for the new beds, she added, is to allow the city to shelter or house 60% of the homeless people in each council district.


Martinez said this deal balances the need to bring people in off the streets with the frustrations of residents who complain about the difficulties of using the sidewalk and feeling unsafe.

“The concept that we discussed with Judge Carter is that each council district would have to meet its 60% threshold for us to be able to move on enforcement,” Martinez said. “That was always the caveat.”

Read the term sheet between the LA Alliance and the City

In recent weeks, county lawyers, along with lawyers for other parties in the case, known as intervenors, expressed frustration with how the negotiations were going. The county asked that the case be assigned to another judge and for the talks between the parties and the judge that occurred outside of court to stop. Carter rejected their request for reassignment.

Skip Miller, a partner with the Miller Barondess law firm and outside counsel for L.A. County in the case, said in a statement: “This lawsuit has no merit with regard to the county. It is between the plaintiffs and the city, and we’re glad they settled. We intend to litigate and win this case.”

The county is “doing everything possible to address homelessness without stigmatizing it as a crime,” Miller added. “Any assertion that the county has failed on this obligation is utterly baseless.”

Elizabeth Mitchell, an attorney with Spertus Landes & Umhofer who represents the L.A. Alliance for Human Rights, said the county needs to do more and come to the table. She said the deal with the city will help expand the options for people living on the streets and create accountability for local elected leaders.

“The audacity of the county to say they’re doing enough when the streets clearly show otherwise is offensive to me, to those living unhoused on the streets who are desperate for help and the thousands of workers who are trying to help them,” Mitchell said.
B L.A. just changed its entire approach to homelessness. Does it place politics above need?


Homeless people and advocates have previously told The Times that there is not enough permanent housing of any kind and that the end result of this approach is to shift people from one place to another and elevate politics over need.


Some have also decried the conditions in new interim housing that has been brought online — in the form of leased hotel rooms, converted motels and newly built shelters — saying that along with onerous rules and curfews, that strategy doesn’t take into account the unique needs of people who have been traumatized from years of living on the street.

Pete White, the founder and executive director of the Los Angeles Community Action Network, which is also a party in the lawsuit, noted that attorneys representing his organization “were excluded entirely from these negotiations,” even though it represents homeless people on skid row.

“What the city and plaintiffs have put out today looks exactly like the backroom deal we would expect: property owners and politicians attempting to use mathematical equations as legal and political cover to enforce the City’s anti-camping ban,” White said in a statement.

Councilman Mike Bonin said that while this proposed deal gives the city “an exit strategy from a long and complicated lawsuit,” he was against it. He is worried that the deal will continue to balkanize the city’s approach to homelessness and lead the city away from building more permanent housing.

“I have grave concerns that this settlement will propel the city even faster in the direction it’s been heading — moving some people into shelters, where they will most likely be locked into homelessness for years instead of being housed, and then using law enforcement to push everyone else from block to block,” Bonin said in a statement.

The 92-page lawsuit cited state and federal law in 14 allegations, accusing the city and county of breaching their duty to abate a nuisance, reducing property value without compensation, wasting public funds and violating the state environmental act and state and federal acts protecting people with disabilities. In May 2020, Carter ordered the city and county to find shelter for the thousands of people living near freeway overpasses, underpasses and ramps.

That decision was eventually vacated when the city and county agreed to construct new forms of shelter for 6,000 people within 18 months, and fund homeless services for the people who ended up staying in these locations after they were built. (The city reported constructing just over 6,000 new beds as of late August.)

Then there was an effort to focus on skid row — a neighborhood that Carter regularly visited and where he once held an outdoor hearing. This culminated in an April 2021 order that the city and county offer some form of shelter or housing to the entire homeless population of skid row by October of that year. 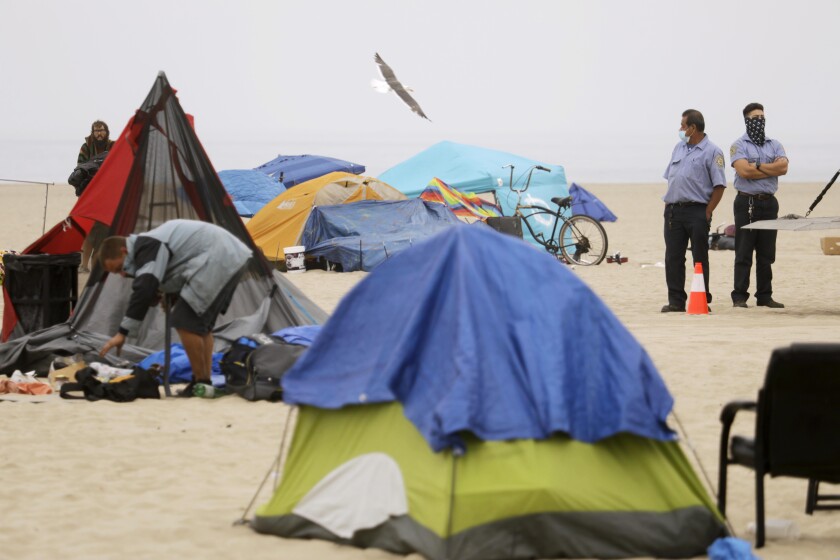 
The city, county and the Los Angeles Community Action Network objected and asked a higher court to weigh in. In September, a three-judge panel of the U.S. 9th Circuit Court of Appeals overturned Carter’s decision, saying he deployed “novel” legal theories that no one had argued, and ruled on claims that no one had alleged and on evidence that was not before him.

Over the last year, the city and county had been negotiating together with the plaintiffs in hopes of reaching a deal that would satisfy all the parties involved.

At a certain point, the city resolved to go at it alone and negotiate without their counterparts from the county. It coincided with an uptick in frustration from the city’s elected officials who said the county was unwilling to offer up more resources to get a deal. In response, county officials pointed to ways it was going above and beyond in helping people in need. 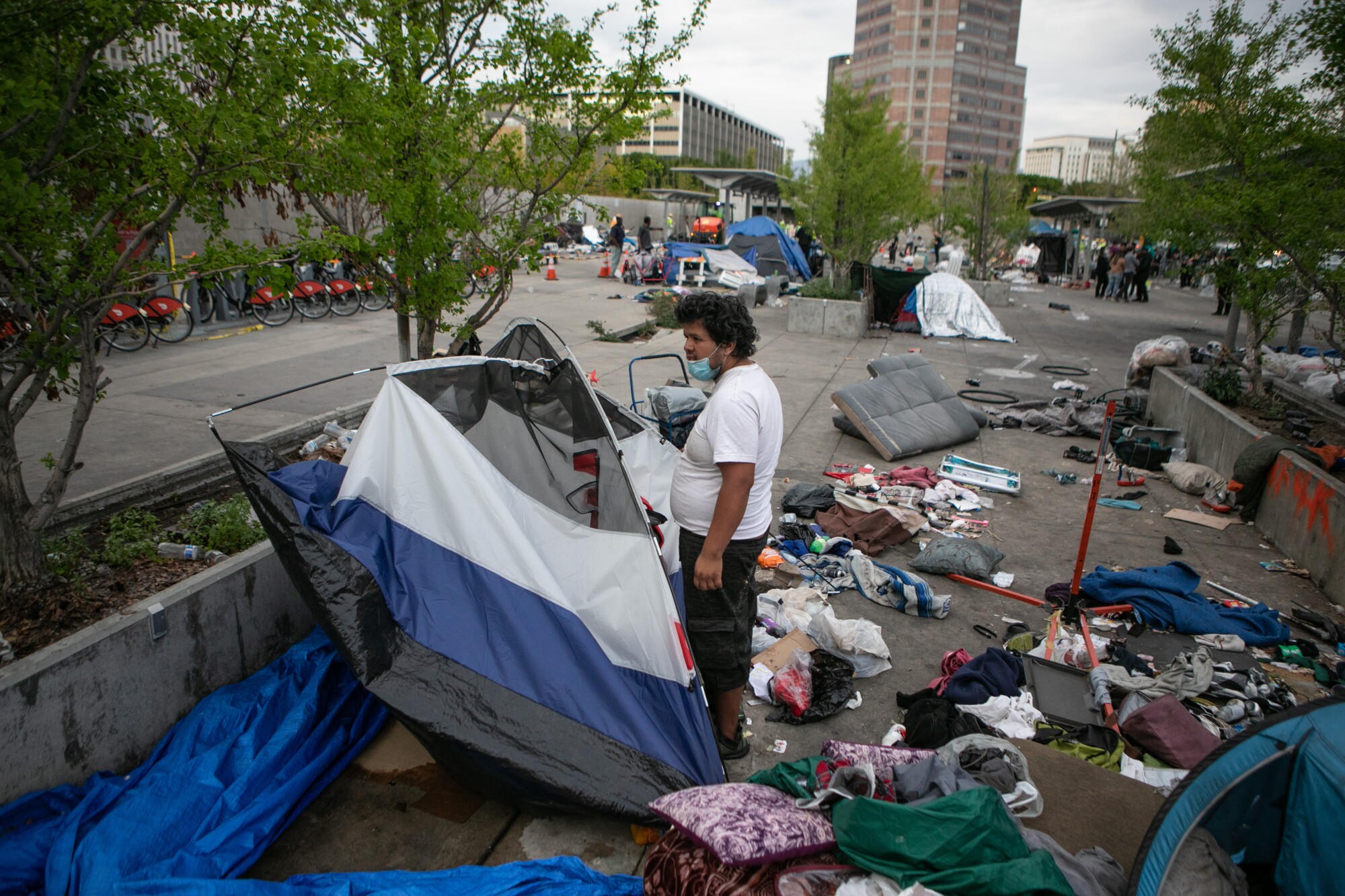 A man packs up his tent as the city clears Toriumi Plaza in Little Tokyo of a homeless encampment.
(Jason Armond / Los Angeles Times)

Councilman Kevin de León, who is running for mayor and represents skid row, said he likes the settlement because it clearly defines whom the city is responsible for getting indoors.

People “who are struggling with substance abuse, or severe mental health conditions, those individuals will be the sole responsibility of the county,” he said. “They should not be in the position to continuously shirk from their responsibility. No more passing the buck.”

Councilman Joe Buscaino, who is running for mayor, said he was pleased there was an agreement but cautioned that the deal would do little to accomplish what has been the centerpiece of his mayoral campaign: keeping sidewalks open and clearing large encampments. He said that without more forceful laws and more cooperation from the county, the needle won’t move.

“I still don’t think we’re going to see a drastic improvement on our streets,” he said of the agreement.