La Prochaine Génération: The Next Generation of Louisiana French Speakers
​

Like every coming-of-age ceremony, a high school graduation represents the crossing of a threshold, and an experience that marks change. In May 2021, eighteen-year-old Taalib Auguste will cross the stage with his class of 2021, though he finished his online courses in December during quarantine.
He and many others in this year’s class had an unusual senior year.
I spoke with Auguste via Zoom on his last day of class. He wore a purple Louisiana State University polo in a home office. It was December, and the persistent sun in Prairieville, Louisiana, burned heat into the laptop backdrop.

Auguste is a Creole French speaker and self-proclaimed language activist. That weekend, he got the news that his media series, LACréole Show, was approved for a fourth season. It was not a route he imagined taking when he started high school. Although he grew up speaking Louisiana French with his father and Creole French with his mother, he never used it in public before high school. 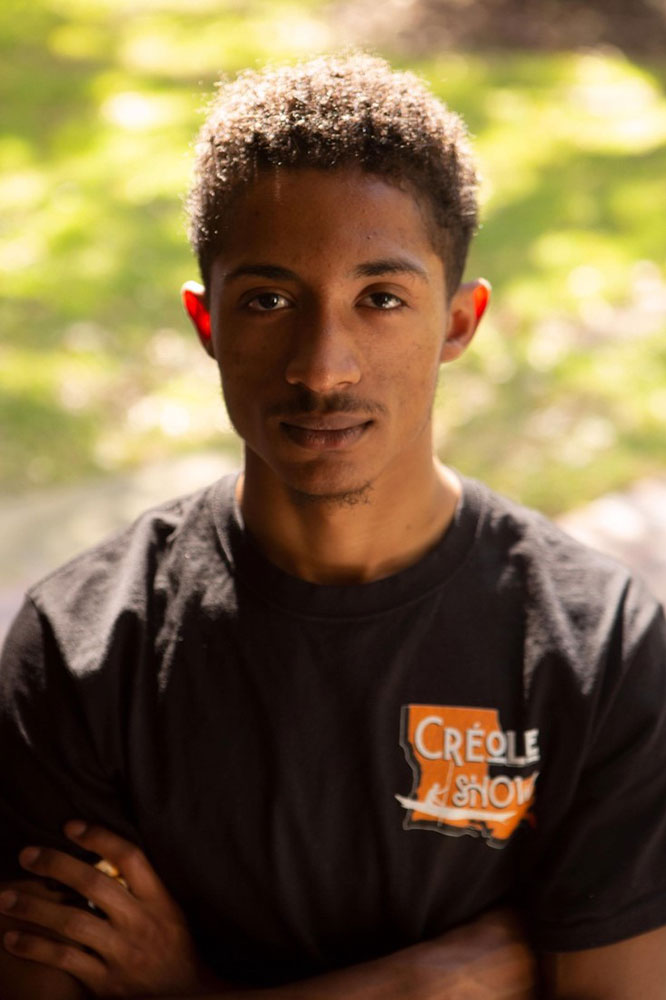 “My high school French teacher didn’t know I spoke French,” Auguste recalls. “I am fairly quiet, so I did not say much. One day in sophomore year, I was called to respond in class. I got up to the front, and just kept talking. She was very surprised.” Auguste laughed. “She told me that was enough, and that I would just get an A for the course.”

Auguste’s opinion varies from others in the speaking community. He uses the term “Creole French” to refer to all French dialects spoken by European and African communities. This is a way to recognize Indigenous languages as first languages, repair the overuse of the term “Cajun French,” and differentiate between minority heritage languages and standard French instruction. According to the 2010 census, only three percent of Louisianians speak French in the home, and the reduction of French literacy complicates accessibility to folklife and history. Community members see French as the language of insider conversation and oral history.

Most historical documents produced in the state before the 1800s—including business archives, memos, and legal documents—are written in French. The accessibility of this cultural record diminishes as French language skills decline.
After Auguste came forward as a speaker, he slowly became more comfortable with public language use. He was introduced to Télé-Louisiane, an online media channel for Louisiana French based in Lafayette, Louisiana. There he met several other native speakers under thirty who see Louisiana French as a valuable asset of their cultural heritage.

Télé-Louisiane is a project in a larger effort to celebrate French language activism in the state. Working cooperatively, community groups, cultural industries, and state legislators have taken intentional steps to maintain fluency in Louisiana.
By the end of his sophomore year, Auguste had begun to protect Creole French by developing contemporary modes of language use. The next year, he pitched the idea of a talk show to Télé-Louisiane. LACréole Show would be a podcast and video series for Franco-Creole Louisiana hosted by youth interested in cultivating digital conversations in Louisiana’s French-speaking community. The idea was to have live conversations with influential francophones.
Its first episode aired in spring of 2020. It turned into a series of twenty-minute episodes co-hosted by Auguste with Beau Brown and Amelia Dunn—all eighteen years old—and filmed by Ethan Castille. Episodes are available for free on YouTube and the LACréole Show website. The young team has interviewed everyone from musicians and museum directors to priests and U.S. congressmen. It is an open call to any and all in the Creole French community. Topics include the economy, hurricane devastation, Americanization, segregation, and Cajunism. Together, the episodes represent a collaborative voice for the French-speaking community in Louisiana.


I want my work to show the complexities in the relationships of language and culture within Louisiana,” Auguste said.

After graduation, Auguste will begin pre-production immediately. Along with LACréole Show, he has also agreed to co-host a French morning show over the summer.

He sees how language has helped him recognize the accepted perspectives in education across the state. "Why are students in Louisiana taught about the Louisiana Purchase rather than La Vente de la Louisiane (the sale of Louisiana)?” Auguste questions.

In the fall, he plans to attend Baton Rouge Community College for two years before transferring to Louisiana State University for political science.

“I think becoming active in politics is the only way we can change the state,” Auguste said. His platform is cultural prosperity and economic development of Louisianans.

Good luck to breh
You must log in or register to reply here.

B
Lakota elders helped a white man preserve their language. Then he tried to sell it back to them.
2

Post-emancipation Migrations in the French Caribbean