Jaime Munguia gets one more fight in 2022.

Before the holiday season kicks off, Jaime Munguia (40-0, 32 KOs) will give fans a special treat as he faces Gonzalo Coria (21-5, 8 KOs) in a 10-round middleweight fight from Arena Astros in historic Guadalajara, Mexico on Nov. 19. The contest will be broadcast worldwide on DAZN (TV Azteca in Mexico).

“Everyone has been anxiously waiting for Jaime Munguia’s return to the ring,” Chairman and CEO of Golden Boy Oscar De La Hoya said.
“We are excited for him to put on a show for all his fans live in Mexico and worldwide on DAZN so he can end the year with a bang and start 2023 hungrier than ever.”

Munguia was last seen this past June when he knocked out Jimmy 'Kilrain' Kelly at the Honda Center in Anaheim, California. He sent Kelly to the mat three times before the referee stopped the fight in the fifth round. Coria was last seen in July in Cordoba, Argentina scoring a split-decision win against Emiliano Pucheta.
“We are prepared for this new challenge, and I’m excited to fight for the first time in Guadalajara,” Munguia said in a statement.

“We have never stopped training. Coria is not a simple rival. He will want to come and beat me in my home country. Once we get through this test, I hope to kick start 2023 with a big fight that all my fans are waiting for.”
Coria rides a three-fight winning streak heading into the most important fight of his career.
“I am more than prepared for this fight to go up against a great champion like Jaime Munguia,” Coria said.
“We are preparing with all our energy, and we are coming for a huge victory.”​

He should be stripped

Megadeus said:
He should be stripped
Click to expand...

He muted his IG comments after he posted a poster of this fight. Coward

Derek Lee said:
He muted his IG comments after he posted a poster of this fight. Coward
Click to expand...

Lmao why would he do that

this shyt is wild...no undercard has been announced for this...is this is a one fight card? 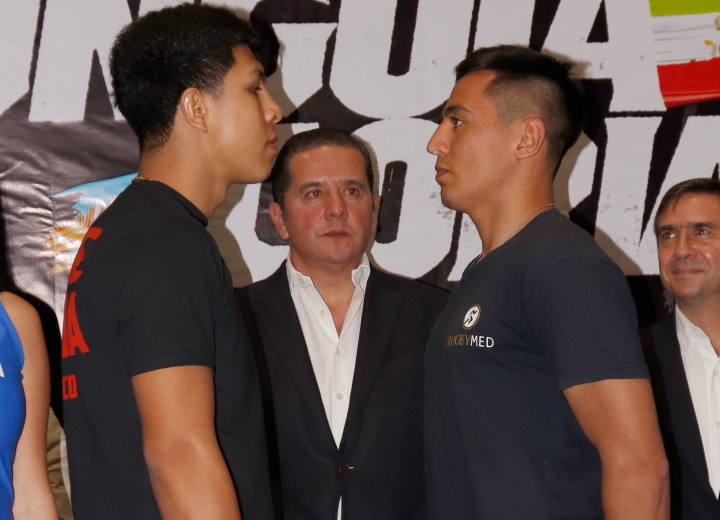 Jaime Munguia arrived under the middleweight limit for a fight that was speculated to take place at a heavier weight.

Original plans called for a maximum weight of 165 pounds, closer to the super middleweight limit. However, neither boxer needed that cushion for what is now a traditional middleweight fight.

It marks a firm return to the division for Tijuana’s Munguia (40-0, 32KOs), who weighed a career-heaviest 165 pounds in a fifth-round knockout of England’s Jimmy ‘Kilrain’ Kelly on June 11 in Anaheim, California. Munguia took the fight at the higher weight limit as means to keep open his options, including a possible super middleweight campaign.

The 26-year-old seemingly came to an agreement with England’s John Ryder for a fight that was targeted for October 29 in Anaheim. Both parties were on board, only for the bout to never materialize and with Munguia resurfacing in Mexico, where he fights for the second time in his past three starts.

Munguia began 2022 with a third-round knockout of unbeaten D’Mitrius Ballard on February 19 in his Tijuana hometown.

Coria (21-5, 8KOs) fights outside of his native Argentina for just the fifth time in his six-year pro career. The 25-year-old southpaw from Cordoba, Argentina is 1-3 in the road, with the one win actually occurring in Mexico when he outpointed Marco Reyes over twelve rounds in a June 2019 clash in Chihuahua.

A three-fight win streak accompanies Coria into the ring on Saturday, though he is considered a heavy underdog in a matchup that has drawn industry-wide criticism. Among his five defeats is an October 2020 second-round knockout to Kazakhstan’s Janibek Alimkhanuly, who has since claimed the WBO middleweight title.

Am I the only one watching this

True Blue Moon said:
Am I the only one watching this

This Sanchez/Garcia fight has been pretty fun.

This Sanchez/Garcia fight has been pretty fun.
Click to expand...

Yeah, it definitely has been

This fool Sanchez done probably punched himself out.

TheNig said:
This fool Sanchez done probably punched himself out.

You see how he bent over like that and backing up dude slowing down.

I have been out. I might make it back for the main event
You must log in or register to reply here.