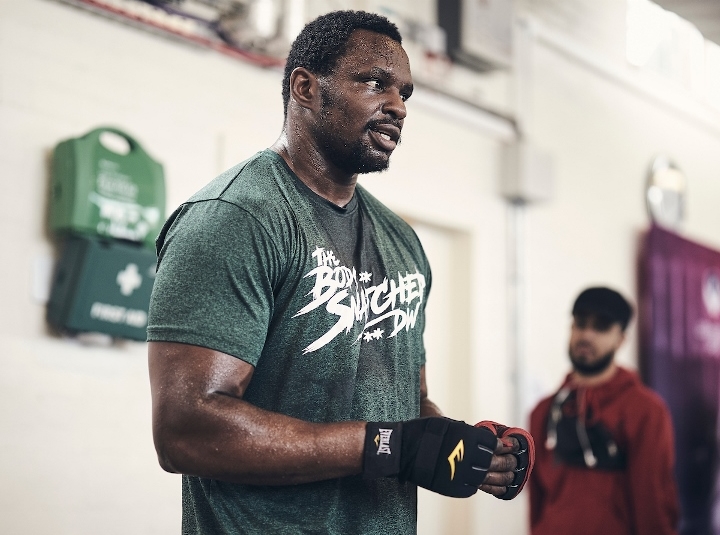 BY RON LEWIS
Published Fri Nov 25, 2022, 09:53 AM EST
Both Dillian Whyte and Jermaine Franklin wore football shirts of their respective national teams Friday only a few hours before England will face the United States in Qatar, as they weighed in for Saturday’s big heavyweight fight at OVO Arena Wembley in London.
Whyte wore an England shirt and Franklin a U.S. shirt for the weigh-in at Brent Civic Centre. The two sides will meet at the World Cup in Doha on Friday evening.
Franklin was the heavier fighter, by six pounds. Whyte weighed 251 pounds for his first fight since being trained by Buddy McGirt, two pounds lighter than he was for his WBC heavyweight title shot against Tyson Fury in April.
Franklin scaled at 257 pounds, lighter than for his last fight against Rodney Moore in May, but heavier than all but one of his fights before that.
The 12-rounder between Whyte (28-3, 19 KOs) and Franklin (21-0, 14 KOs) is the main event of a show DAZN will stream worldwide (7 p.m. GMT; 2 p.m. ET).
Nathan Gorman will have a whopping 31-pound advantage when he faces Fabio Wardley for the vacant British heavyweight title in the chief support.
The unbeaten Wardley scaled at 240 pounds. Gorman, who lost to Daniel Dubois in his previous attempt to win the title (his only defeat), weighed 271 pounds.
Sandy Ryan weighed 139.7 pounds for her fight with Anahi Ester Sanchez, who once upon a time lost her WBA lightweight title to Katie Taylor in Cardiff (Taylor’s first world title). Sanchez scaled at 138.8.
Olympic silver medalist Pat McCormack, who has won both his pro fights in the first round, weighed 152 pounds for his first fight since signing with Eddie Hearn’s Matchroom Boxing. His opponent, Christian Nicolas Andino, weighed 146 pounds.
Unbeaten British Olympian Cheavon Clarke goes for his fourth win against Jose Ulrich, of Argentina. Clarke scaled at 199 pounds) and Ulrich was 195 pounds.
Irish heavyweight Thomas Carty, who has not boxed since February, weighed in at 252 pounds for his six-rounder with Ukraine’s Pavlo Krolenko, who came in at 242 pounds.
George Liddard, from Essex, weighed 162 pounds for his debut against Nikola Matic, who was 154 pounds. Also at middleweight, Mark dikkinson (3-0) scaled at 164 pounds, a pound more than opponent Gideon Onyenani, who weighed 163.
The Craig Richards-Ricards Bolotniks fight was called off because Richards is ill.

Whyte looked to be in good shape, kind of shape he was in when he fought Rivas. Don’t know about Franklin he came in big maybe that’s to deal with some of the rough house tactics but he might gas.
T