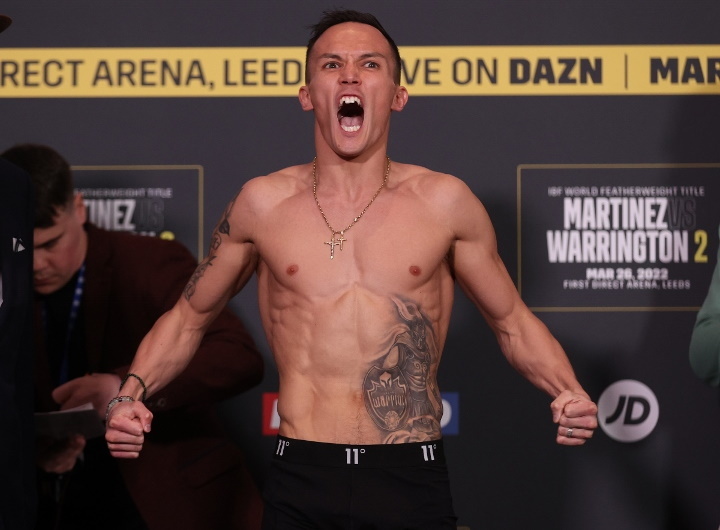 BY RANDOM HITS
Published Sat Sep 24, 2022, 04:23 PM EDT
Josh Warrington will defend his IBF World Featherweight title against Luis Alberto Lopez at the First Direct Arena in Leeds on Saturday December 10, live worldwide on DAZN – and Matchroom and DAZN can announce that the Light-Flyweight unification clash between Hiroto Kyoguchi and Kenshiro Teraji will be broadcast live on DAZN in Europe when the pair clash in Saitama, Japan on Tuesday November 1.

Warrington (31-1-1 8 KOs) regained the IBF strap when he stopped Kiko Martinez in his Leeds fortress in March, with the hometown hero flooring the Spaniard in the opening round before ending matters in the seventh round to punctuate a blistering performance in front of his adoring fans.

The 31 year old suffered a broken jaw in his second career win over Martinez but has fully recovered and now aims to take care of a dangerous mandatory challenge before targeting unification blockbusters.

“So we are back at the Leeds Arena, back for the 12th and potentially final time,” said Warrington. “I’m very excited to be back in Leeds. I started the year very well with a sensational 7th round stoppage against Kiko Martinez to recapture my IBF belt and now finishing the end of the year defending my belt to my mandatory who’s a tough Mexican and has waited a long time to fight me.

“It’s going to be a hard fight, he comes forward, he’s wild and erratic, I’ve got history with Mexican fighters, but I’m hoping to put on a great performance in front of my home crowd.

“I’ve been saying it for so long about going over to the States and fighting in a unification fight. That’s the dream but due to delays with injuries to my jaw and hand I have to fight my mandatory now. I’m fully focused on doing a job, getting the show closed early and finishing 2022 with a bang.”

Lopez (26-2 15 KOs) is no stranger to fighting in the UK having punched his ticket to fight for the title by stopping Isaac Lowe in an eliminator clash in London in December. The 29 year old Mexican has stayed busy while waiting for his chance to tackle Warrington, notching stoppage wins in April and August, and will travel to Leeds with ambitions to emulate the stunning KO win his fellow countryman Mauricio Lara inflicted on the Warrington in February 2021.

“I remember, not too long ago, when a Mexican fighter knocked Josh out in his country,” said Alberto Lopez. “On December 10, in his hometown, I am going to silence his fans. The IBF Featherweight title will return to Mexico. I dedicate this fight to the Mexican people and everyone from my hometown of Mexicali. This one’s for you, and Josh, enjoy that belt while you still have it.”

An announcement on ticket sales for Warrington vs. Alberto Lopez will be made soon.
​
T

but i think he should stop fukkin around so much and just fight, don’t waste this opportunity

We’re on upset watch for sir

lopez should prolly beat the fukk out of warrington...warrington picked up far too many wild injuries in that kiko martinez rematch while lopez has been beating fukk outta ppl lately
You must log in or register to reply here.