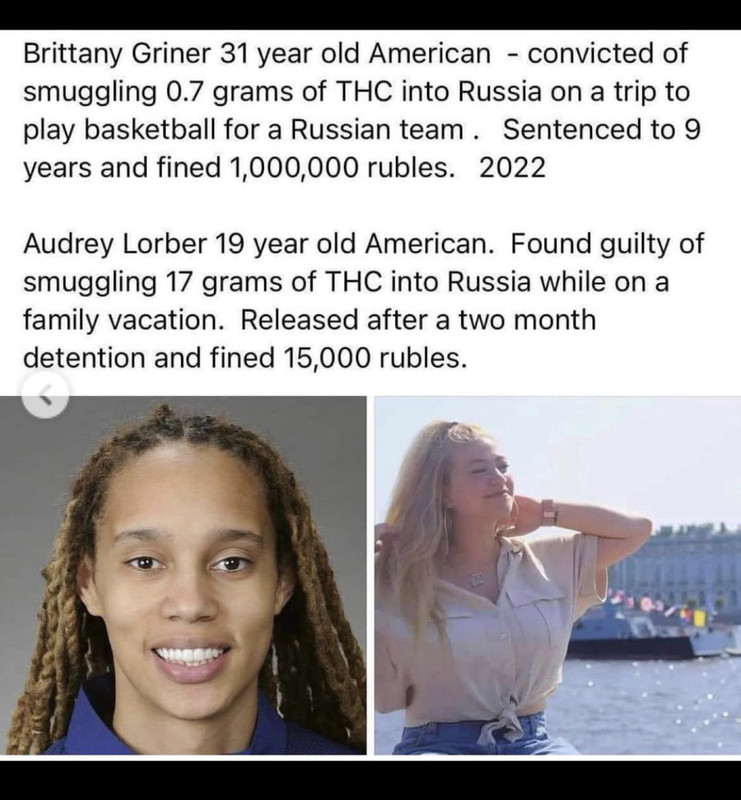 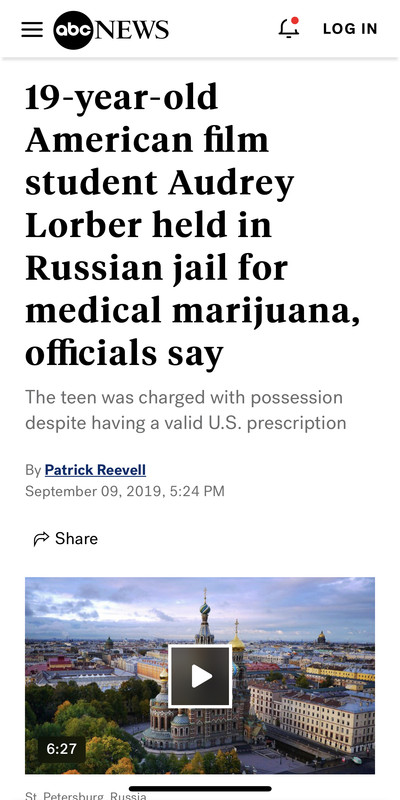 The teen was charged with possession despite having a valid U.S. prescription
ByPatrick Reevell
September 09, 2019, 5:24 PM

MOSCOW -- A 19 year-old film student from New York has spent at least a week in a Russian jail facing drug charges after she was arrested with medical marijuana while visiting Saint Petersburg with her mother.

Audrey Lorber, from Staten Island, was arrested as she tried to fly out of Pulkovo Airport when Russian border agents allegedly found about 19 grams of marijuana on her, according to a statement posted by St. Petersburg's Moskovsky district court.

Lorber had a prescription for the drug which she had brought with her from the U.S., according to investigators, but they considered the prescription to be not valid in Russia.

She was charged with drug possession and since then had been awaiting court hearings in a detention facility in St. Petersburg. Investigators said Lorber had pleaded guilty to the charges. It was unclear if she had a lawyer.

The court statement was made on Sept. 2 but it was not clear when Lorber was arrested. Lorber’s Instagram shows her travelling in Russia with her mother Rochelle from at least mid-July, including a visit to Moscow. Her last post was dated July 22, showing her and her mother laughing in the sunshine by St. Petersburg's Neva River.

Russia has harsh drug laws, which police enforce aggressively and carry long prison sentences. The offense that Lorber is charged with—Article 228 of Russia’s criminal code – is nicknamed “the people’s charge” because it is so frequently used to jail people.

The charge is also notorious for being used in fabricated drugs cases.

ABC News chronicled another American's 2-year jail odyssey in the Russian system on what he says were trumped-up drug charges.

And during the soccer World Cup last year Russian authorities reportedly allowed American and other foreign tourists to bring medical marijuana into Russia provided they could show a prescription. Marijuana is illegal in Russia, including for medical purposes and possession is aggressively prosecuted.

Lorber now studies at Pace University while also working at a restaurant, according to her Facebook profile.

Joey Guli, her boss at the Waterside Restaurant in Staten Island told The New York Post that he had spoken to Lorber's mother about two weeks ago and that she was scrambling to try to free her daughter. Guli described Audrey as a “stellar employee.”

“She has a career ahead of her and wants to be in the movie industry,” he said. “All my customers love her,” he told The New York Post.

The U.S. State Department told ABC News that it was “aware of reports of a U.S. citizen arrested in Russia” and is ready to provide appropriate consular services. “Due to privacy considerations, we have no further comment at this time,” the department said in a statement.

BY DARIA LITVINOVA
SEPTEMBER 17, 2019 / 9:16 AM / CBS NEWS
Moscow — A court in St. Petersburg released a young American woman from prison on Monday after she spent more than a month behind bars on a drug charge. Audrey Lorber was released from custody after the court found her guilty of "attempting to import marijuana purchased in the U.S. into Russia."
Lorber, 19, was fined 15,000 rubles ($235), according to a statement released by the press service of St. Petersburg's courts, but was credited for time served, released and exempted from paying the fine.
Lorber was required to remain in St. Petersburg for 10 days until the sentence technically comes into force, court officials told CBS News. During that period either Lorber or the government have the right to appeal the ruling, but no appeals were immediately filed. 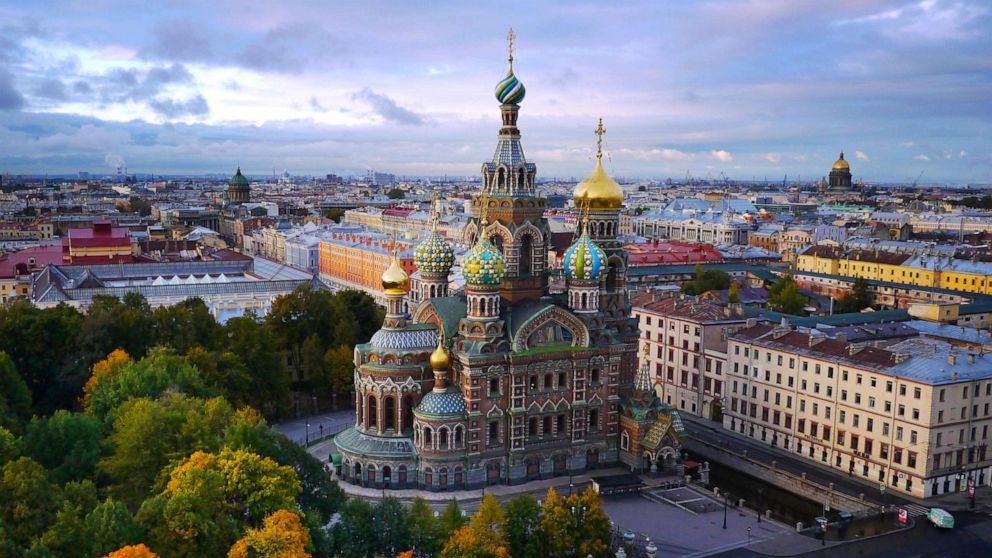 19 year-old New York film student from Staten Island in jail in Russia in St Petersburg for bringing in medical mairjuana. 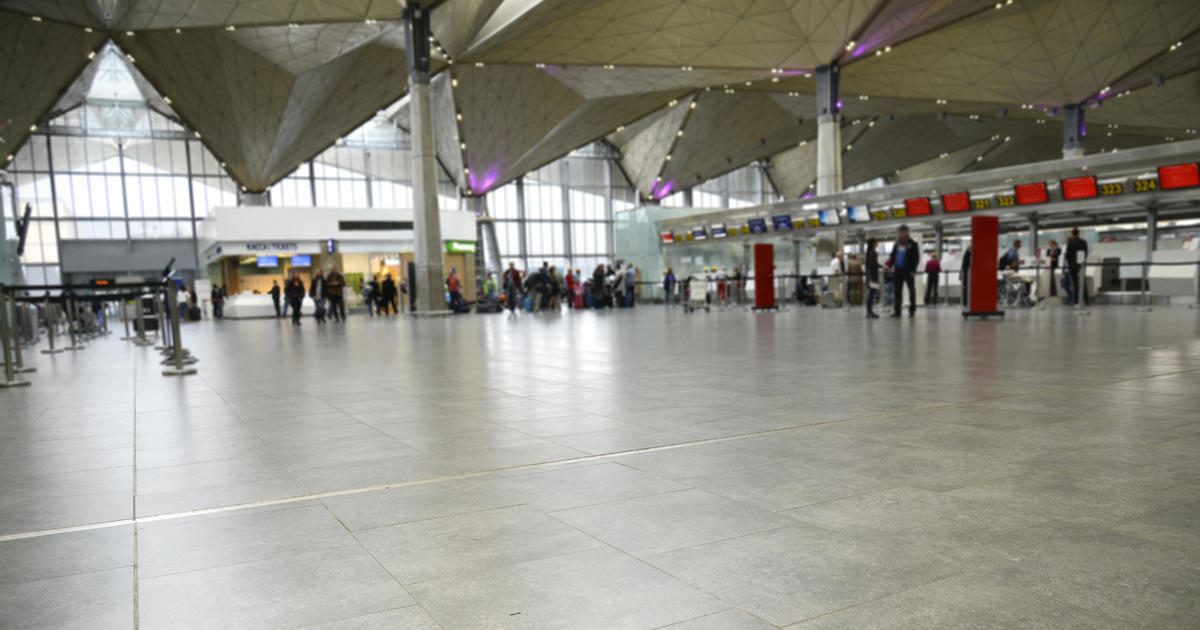 St. Petersburg court found Audrey Lorber guilty of "attempting to import" pot she had a U.S. prescription for, but freed her on time served

Also not high profile enough. I see OP is trying to make a race bait thread.

How is this a race bait shut your stupid ass up

I guess they honored her prescription then

Besides the racial aspect...there is also a War going on outside
No man is safe from


She committed a crime in a foreign dictatorship. There are literally white American men that have been locked up over there for years. She made the excuse that she was in a hurry, and packed it, which let’s face it, is probably not accurate. And as black people, we have to know we can’t afford to break rules, and expect to get away with it.

People bringing up medical must’ve not read the third paragraph of the article…they threw that excuse out the window from the gate, Brittney being a bigger fish and during a war is the difference here. Brittney a POW

This is a clear dap fishing militant bait thread.

You would hope this shyt would make American politicians take a hard look at the nonsense drug laws they push not only in America but in other poorer nations...but it won't.

It pains me to say this but Brittany about to rot for 9 straight.
You must log in or register to reply here.