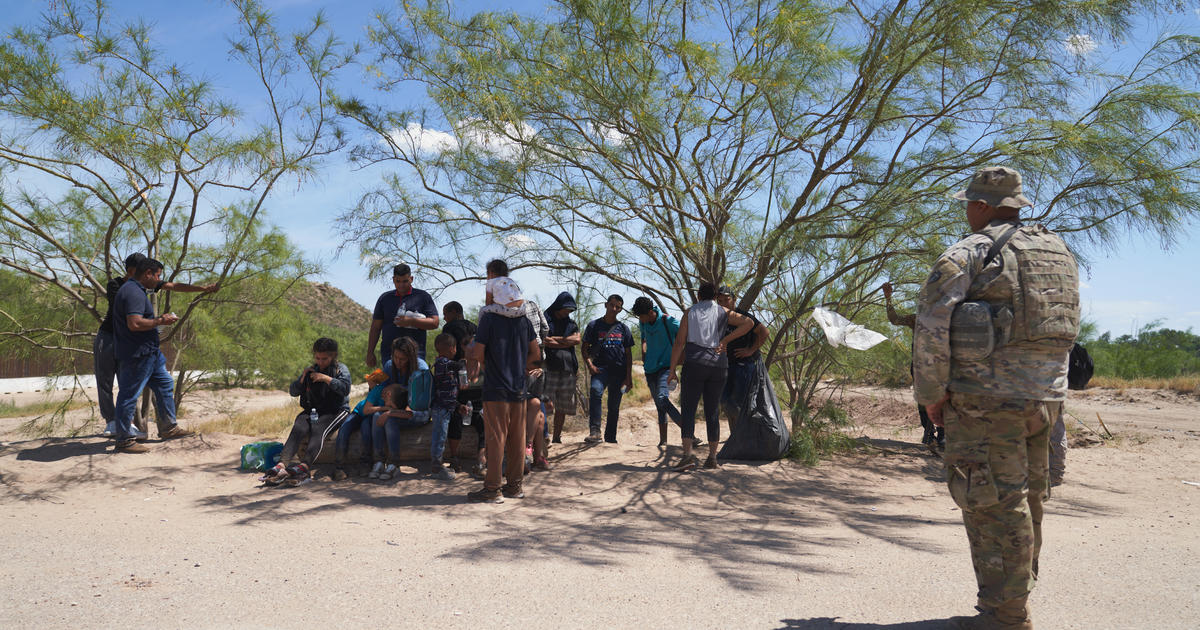 Customs and Border Protection Commissioner Chris Magnus called the drop in migrant arrests a "positive trend," but acknowledged that they "remain high."

BY CAMILO MONTOYA-GALVEZ
AUGUST 15, 2022 / 8:02 PM / CBS NEWS
The number of migrants processed by U.S. immigration authorities along the southern border decreased for the second month in a row in July, a sign that the record level of unlawful migration recorded over the past year is plateauing during the summer, according to federal data released Monday.


U.S. Border Patrol agents recorded 181,552 arrests of migrants who entered the country illegally last month, a 6% decrease from June and a nearly 19% drop from May, when the agency recorded over 224,000 apprehensions, an all-time monthly high.
An additional 18,424 migrants were processed at official U.S. border ports of entry in July, including asylum-seekers the Biden administration is allowing to enter the country on humanitarian grounds, according to the Customs and Border Protection (CBP) data.
While arrests have decreased since peaking in May, the total number of migrant arrivals in July is the second-highest tally for that month, according to historical government figures. Border arrivals also continue to be well-above historical averages, and are on pace to surpass 2 million this fiscal year.

When taking into account migrants arrested for crossing the border illegally and those processed at ports of entry, CBP has processed migrants over 1.9 million times in fiscal year 2022, a tally that already eclipsed the record set in 2021. Fiscal year 2023 starts in October.
Migrant encounters do not equal the number of individual migrants taken into U.S. immigration custody or the number of migrants allowed to stay in the country.
Nearly 73,000, or 40%, of the Border Patrol arrests in July resulted in migrants being expelled to Mexico or their home countries without an opportunity to seek asylum. Those rapid expulsions have been authorized since March 2020 by the Trump-era Title 42 public health order that a federal court required the Biden administration to keep in place.
Moreover, 22% of border arrests in July involved migrants who had previously tried to enter the U.S. unlawfully. The high rate of repeat crossings is partly a result of the mass Title 42 expulsions, which allow some migrants to try to enter the U.S. multiple times without the threat of criminal penalties or detention.
CBP Commissioner Chris Magnus said the drop in migrant apprehensions was linked to Biden administration efforts to combat human smuggling operations and dissuade migrants from journeying north through public messaging campaigns.
"This marks the second month in a row of decreased encounters along the Southwest border," Magnus said in a statement Monday. "While the encounter numbers remain high, this is a positive trend and the first two-month drop since October 2021." 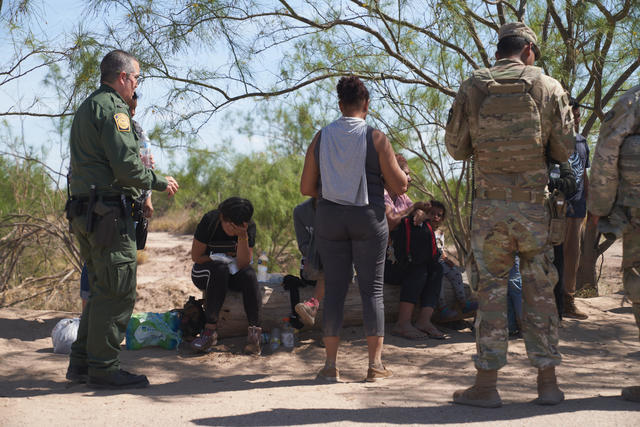 Migrants and U.S. Border Patrol agents try to help a woman after she gets sick as migrants wait during hot weather to be processed by U.S. Border Patrol after illegally crossing into Eagle Pass, Texas U.S. from Mexico on Tuesday July 26, 2022.ALLISON DINNER/ANADOLU AGENCY VIA GETTY IMAGES
Border Patrol in July recorded over 134,000 arrests of single adult migrants, 48% of whom were expelled under Title 42, the CBP data show. It also reported 52,000 apprehensions of migrant parents and minor children traveling as families, 18% of whom faced expulsion.
More than 13,000 unaccompanied children also entered U.S. border custody last month. The Biden administration has not applied Title 42 to unaccompanied minors, most of whom are transferred to government-operated shelters, where they are housed until they turn 18 or are placed with a sponsor.
Whether Title 42 is applied to adults or families depends on several factors, including their nationality, the sector where they cross, any vulnerabilities they may have and Mexico's willingness to accept their return. The policy is mostly applied to Mexican and Central American migrants, whom the Mexican government has agreed to accept in large numbers.
Migrant adults and families who are not expelled under Title 42 can be released with a court notice, sent to long-term Immigration and Customs Enforcement detention centers or deported under regular immigration procedures, including a fast-track deportation program known as "expedited removal."
Those released with a notice to appear in court often wait years for a decision on their asylum requests because of a mounting backlog of over 1.8 million pending cases overseen by the country's immigration judges.
While migrant arrivals from Mexico, Guatemala, Honduras and El Salvador dropped last month, arrests of migrants from other countries, such as Cuba, Colombia, Nicaragua and Venezuela, remained steady or increased significantly.
More than 55,000 of the migrant encounters in July involved Mexicans, 20,305 involved Hondurans, 20,159 involved Guatemalans, 20,099 involved Cubans, 17,651 involved Venezuelans, 13,459 involved Colombians, 12,076 involved Nicaraguans, 7,941 involved Salvadorans, 5,498 involved Brazilians and 5,396 involved Haitians, CBP data show.
Despite defending Title 42 as a necessary public health restriction for over a year, the Biden administration tried to end the policy in May, citing the improving pandemic environment. But Republican-led states convinced a judge to block Title 42's termination on administrative grounds.
While it's unclear when the administration will be able to wind down the Title 42 expulsions, it announced last week it would stop subjecting migrants to the so-called Remain-in-Mexico policy after it cleared the last legal hurdle to end the Trump-era rule.
The move will have a limited impact on U.S. border policy, since the Biden administration only enrolled a few thousand migrants in the program since it was forced to revive it in December 2021 because of another Republican-led lawsuit.

Be the first to know
Get browser notifications for breaking news, live events, and exclusive reporting.

Nearly 8,000 migrants are now crossing the southern border each day, according to data obtained by NBC News.

At meetings, some DHS officials have expressed frustration with the Biden administration's reluctance to send migrants to inland cities, as GOP governors have done.

The city of El Paso may spend $10 million in September alone on its response to a massive increase in migrants passing through the city. The money should be reimbursed by the federal government, but that has been taking time.

El Paso's new dashboard shows the thousands of migrants it serves, and how many it sends north on buses | CNN

Amid a spike in migrant encounters at the southern border, the City of El Paso, Texas, launched a migrant dashboard Saturday to follow activity at its welcome center.

El Paso’s new dashboard shows the thousands of migrants it serves, and how many it sends north on buses​

Migrants at a Welcome Center in El Paso, Texas, US, on Thursday, Sept. 22, 2022.
CNN —
Amid a spike in migrant encounters at the southern border, the City of El Paso, Texas, launched a migrant dashboard Saturday to follow activity at its welcome center.
The city has served more than 14,900 migrants since early September and bused thousands to cities further north.
More than 8,000 migrants have been transported from El Paso to New York and about 2,300 to Chicago since August 23, when the busing program began, according to the dashboard. The migrants are offered the city-funded journeys after being processed and released by the Border Patrol
Last edited: Oct 9, 2022
You must log in or register to reply here.