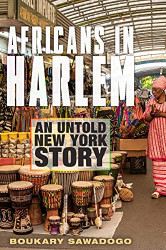 The Story of African Émigrés in Harlem with Boukary Sawadogo​

A lecture by Boukary Sawadogo at the American Library in Paris. Filmed on 22/11/2022 with a live audience both in person and on Zoom. Boukary Sawadogo considers the presence of African immigrants in Harlem’s historical development and cultural transformations. Africans are not the face of immigration debates in the United States as has traditionally been the case of other migrant and diasporic groups. Yet, Sub-Saharan African émigrés are growing in many places, doubling their number every ten years since the 1980s to reach two million in 2019. Nowhere is this more vibrant than in the historically Black neighborhood of Harlem in New York City.
Scholar and author Boukary Sawadogo not only discusses the story of African immigrants in Harlem’s most recent renaissance, but also interrogates the multifaceted historical connections and exchanges between Africa and Black America through Harlem.
About the speaker: Dr. Boukary Sawadogo is an Associate Professor of Cinema Studies and Black Studies at the City University of New York’s City College and CUNY Graduate Center. Beyond African film and media industries, Sawadogo’s work is widening in scope and depth to include study of African immigration in the 20th- and 21st-century America amidst national demographic shifts. He has recently authored the book Africans in Harlem: An Untold New York Story (2022).
Last edited: Nov 27, 2022

does he specifically talks about why Malian, Senegalese, Guineans and Ivorians to an extant(these countries share alot of the same culture or ethnic groups) move to Harlem?