Andrew Gillum has been indicted for wire fraud, diverting funds and lying to the FBI.

Fake ass Brian McKnight is thru​ 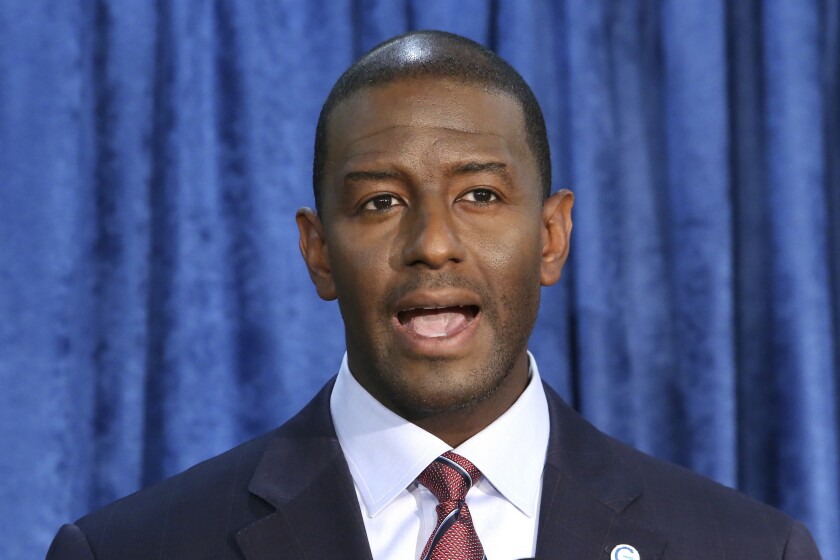 File photo of former candidate Andrew Gillum.
(Associated Press )
ASSOCIATED PRESS
JUNE 22, 2022 9:03 AM PT
TALLAHASSEE, Fla. —
Andrew Gillum, the 2018 Democratic nominee for Florida governor, is facing 21 federal charges related to a scheme to seek donations and funnel a portion of them back to him through third parties, the U.S. attorney’s office announced Wednesday.
Gillum, 42, and co-defendant Sharon Janet Lettman-Hicks, 53, face 19 counts of wire fraud. Gillum is also charged with making false statements to the Federal Bureau of Investigation.
The U.S. attorney’s office said the pair “conspired to commit wire fraud, by unlawfully soliciting and obtaining funds from various entities and individuals through false and fraudulent promises and representations that the funds would be used for a legitimate purpose.”
Lettman-Hicks then used her company to fraudulently give money to Gillum disguised as payroll payments, the office said in a press release.
It’s the latest trouble for Gillum, who narrowly lost to Republican Gov. Ron DeSantis in a race that required a recount.

Gillum served as mayor of Tallahassee before running for governor.
In March 2020, Gillum was found intoxicated and unconscious in a hotel room with two men, including one who works as a male escort. Two days later he entered a rehabilitation center, and later did a television interview and said he’s bisexual.

I'd love to see the case in entirety.

Wow, talk about a epic fall from grace. He went from a neck to neck tight race for Governor of Florida and now he’s caught doing hard drugs with men in hotel rooms, going to rehab and now indicted by the feds. All while Desantis has a great shot at president in 2024

This is why i will always revere obama for the mere fact that a black man, black wife , black family was able to navigate office from senate to two term presidency despite the intense spotlight on him, just waiting for him to fail or lose it for a second, not everyone is ready for prime time

OnFleekTing said:
How did this dude get to become a candidate for governor
Dems did like zero vetting on this brother
Click to expand...

We know he’ll be comfortable if he goes to jail.

Ramblings of an Angry Old Man

How many politicians do this ?
This dude might be done !

How far are the feds going back with this case ?

Being that this guy lost why are they are on his neck like this?
It seems like the gay shyt was a set up and now this FBI investigation
And dude ain't held any office in like 4 yrs

it was all good just a few years ago

damned mine eyes, DAMNED mine eyes!!

I'm no supporter of Gilliam. But, isn't Donald Trump and Matt Gaetz guilty of these same crimes. Yet they are still walking free. Only in Amerikka.
You must log in or register to reply here.