Brief History of Reggae in Toronto

A BRIEF HISTORY OF REGGAE IN TORONTO 
The history of reggae in Toronto, one of the strongest cities in the world for this genre and its offshoots, can't merely be a rundown of notable bands - it's bound up in an infrastructure of musicians, venues, promoters and record stores.
It's also about the tension of artists trying to succeed in both Canada and in the reggae universe with Jamaica as its axis.

Most of all, unsurprisingly, it's tied to Jamaican people in Canada. Jamaicans came to Toronto in large numbers in the 50s and 60s, and since then have somewhat determined the tenor of Toronto's black community while spreading their music to a multicultural fan base in Toronto, all the while maintaining possession of it.

Caribbean immigrants' arrival in Toronto goes back well over 100 years but really started to pick up speed in the late 1950s when racist immigration policies were relaxed largely to permit immigration of commonwealth-resident nurses and household helpers. The Sheiks, arriving in the mid-60s, were the first Jamaican band to make a name for themselves here. They were well versed in American soul music and got gigs within Toronto's thriving R&B scene at clubs like the Zanzibar and the Coq D'or.

The R&B scene had no appetite for contemporary Jamaican sounds like rock steady, so outside of those establishments, places like the W.I.F. and Caribbean Club, Club Jamaica and Club Trinidad were places to hear Jamaican music with fellow expats and curious locals from all walks of life (canned goods magnate Mr. Goudas spends considerable time in his autobiography talking about his experiences DJing Jamaican music at his 813 Club).

This era is surveyed magnificently in the first compilation of the six-volume Jamaica To Toronto series. One of the first major industry figures for reggae was the Sheiks' manager Karl Mullings, who soon became a key advocate for Caribana, founded in 1967. In the late 60s, a key figure in Toronto history arrived: Jackie Mittoo. Mittoo was the pianist of the legendary Skatalites ska band and had gone on to become the house bandleader for Jamaica's foundationally important Studio One label, penning some of reggae's most enduring instrumentals. In Canada, Mittoo set out to explore the Canadian music industry by seizing new opportunities like the establishment of new Canadian content rules. He released the album Wishbone in 1971 which was a curious brew of soul-pop, adaptations of some of his Studio One material and his quirky, rough-hewn vocals. 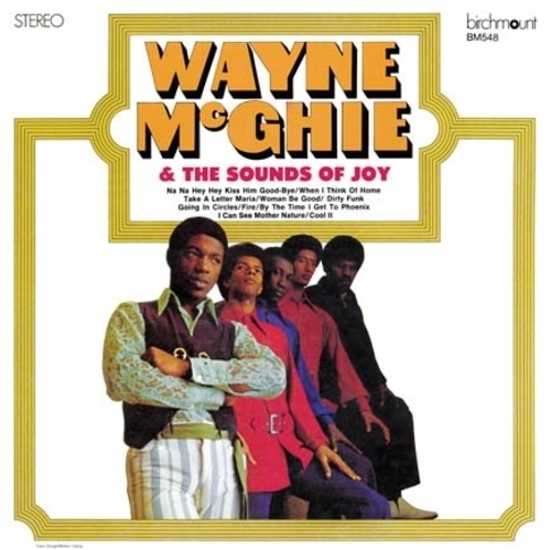 Another early LP from a talented Jamaican musician, Wayne McGhie and the Sounds Of Joy made a brief appearance around this time. Other early reggae artists of note in Toronto were The Webber Sisters, Leroy Brown, Glen Ricketts, and Stranger Cole, who ran a record shop in Kensington Market.

As the R&B scene started to fade away, a local musical identity asserted itself. By 1974, Summer Sounds recording studio was founded in Malton by Jerry Brown and boasted a sound comparable to the spacy, effects-laden records Lee Scratch Perry was releasing in Jamaica.

Shops abounded too: through the 70s and early 80s Eglinton West of the Allen Expressway featured record shops affiliated with prominent Jamaican record producers Duke Reid, Joe Gibbs and Prince Jammy (near the recently christened "Reggae Lane"). As with all record stores, these were vital places to socialize with other musicians and check out the latest sounds.

Cultural critic Dalton Higgins reminisced, "My father would come home from work every Friday and go buy 45s at Monica's. I would mimic those energies in Grade 7 and 8, hanging out at the record store with my friends. And there were always elders and community leaders around." 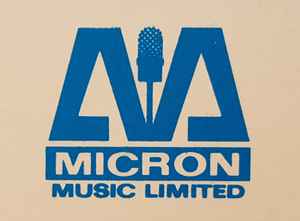 These shops also distributed local labels like Micron and Half Moon. Even Stompin' Tom Connors' Boot label released some reggae titles as part of a broader mandate to promote "folk music" from around the world.

By the mid-70s, Ishan People became the first homegrown band to gain renown as having a Canadian reggae sound. They recorded with Blood Sweat and Tears' singer David Clayton Thomas and backed Bruce Cockburn's huge hit "Wondering Where The Lions Are." Earth Roots and Water and Chalawa also had distinct sounds.

Klive Walker, author of the essential reggae history Dubwise articulated the position of reggae from Canada within the larger Jamaican diaspora: "when diasporic reggae surfaced it had to contend with the international profile of Jamaican reggae, the reggae adventures of mainstream rock, pop, and rhythm and blues and the artists and the reggae musicians of Caribbean heritage who imitated Jamaican reggae.

Diasporic reggae justified its existence and produced its own major artists partly because it spoke to the everyday experiences, struggles, hopes and aspirations of young people of Caribbean heritage in cities like London (UK), Toronto or New York."
A very different offshoot was brewing in the outer regions of Metro Toronto: the city's first sound systems. Jonbronski, co-founder of CIUT's hip hop touchstone The Master Plan Show, recalls: "Toronto, late 70s, early 80s sound crews had a very L.A. sound with heavy dose of reggae. Maceo, Killowatt, Sunshine, and City Crew (Buffalo NY) carried the swing, while more local crews got B-listed billing at parties. A lot of funk and funk instrumentals were played. No real rappers per se, but heads that know how to get the party right just by talking."

A mix of American funk and a good dose of reggae remains a defining characteristic of Black music from Toronto over the decades. Throw in some London vibes and some pan-Caribbean flavour and that's most of what G98.7FM plays today which sets it apart from American Urban radio such as Buffalo's WBLK. This is how you "get the party right" in Toronto.

Though community newspapers like Share and Contrast had existed for years, it was difficult for reggae to break into the Canadian music and media industries. Leading stations like CHUM wanted nothing to do with homegrown reggae, even during Bob Marley's most commercially successful years as he filled Maple Leaf Gardens.

Fortunately, a big shift occurred as CKLN launched in 1982 (featuring David Kingston, partner to definitive dancehall photographer/author Beth Lesser) and CFNY's Spirit of Radio era featured Deadly Hedley Jones' programming. On the print front, with NOW Magazine launching in 1983, all of the sudden there was new visibility to the burgeoning reggae-new wave culture clashes of Queen St. West at clubs like the Bamboo, the Rivoli and after-hours House of David.

Hybrid bands like V (a forerunner to the Parachute Club) interfaced with 20th Century Rebels and Truths and Rights to create a truly downtown Toronto sound. Leroy Sibbles, another Studio One luminary, became was the biggest star of this era and recorded for both Boot and Attic Records. 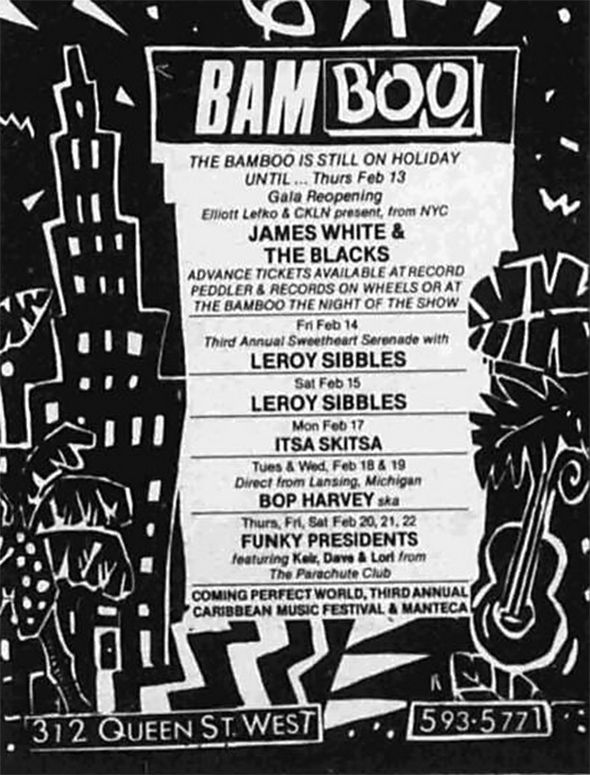 Dub poet Clifton Joseph recalls: "There was a scene going on Queen St. We were playing at those clubs, performing at different cultural events with a lot of different artists and Queen St. became in some ways our home. There was a whole sweltering rise of culture at the time. Queen St. became this place where there was a lot of cross pollination."

The 80s are still considered to be a high-water mark in reggae's local and national visibility with groups like the Sattalites and Messenjah (from Kitchener, featuring involvement from veterans of 70s multicultural funk band Crack Of Dawn) and performers like Glen Ricketts, R Zee Jackson, and Chester Miller. However, Toronto's most distinctive contribution to reggae perhaps ever was its strength in dub poetry, where instrumental reggae is the bedrock for socially conscious poetry. Lillian Allen, Clifton Joseph, and their Dub Poets Collective were at the vanguard of a worldwide movement, hosting festivals and releasing challenging but hard-driving music. Allen's Conditions Critical and Revolutionary Tea Party won Juno awards. While reggae in the UK hooked up with punk for rock against racism, these artists (particularly Allen, Adri Zhina Mandiela and Afua Cooper) advanced issues pertaining to feminism and black Canadian history as well.

Their international notoriety was indicative of a larger concept of Diasporic Music, to borrow the term of journalist/broadcaster Norman Otis Richmond, in which the distinctive rhythms of Jamaicans within Canada were finding audiences in the island's diaspora around the world and were in turn being influenced and appreciative of African, American, and Caribbean forms
Last edited: Jul 17, 2022
You must log in or register to reply here.
Share:
Facebook Twitter Reddit Pinterest Tumblr WhatsApp Email Share Link
Top