Iñaki Williams: ‘Playing for Ghana allows me to get closer to my roots​ 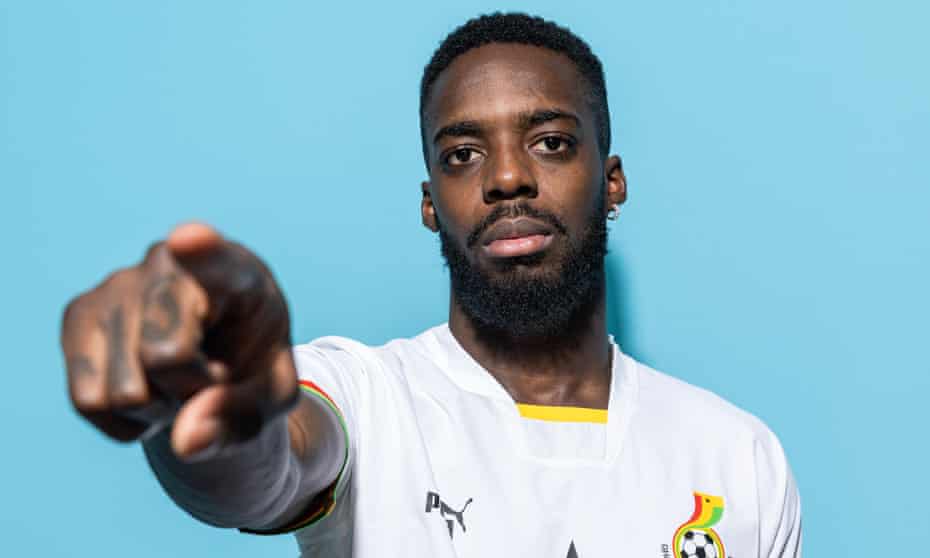 Born in Spain but now at the World Cup with Ghana, the striker agonised over his decision to play for his parents’ birthplace

There is a light in Kweku’s eyes. “This is just incredible, crazy,” he says. “You see it from the outside and it’s amazing. You live it from the inside and it’s even more amazing. It’s like a master’s. I’m learning something new every day and about myself too. I’m internalising more. There were things I didn’t think about before and now I do.”


This is not just a World Cup. For Iñaki Williams, this is transformative, life changing, a different man with a different name. Here, he’s Kweku, born on a Wednesday. And he’s beaming.


Back home, both homes, his family are too. Especially his proud 90-year-old grandfather Richard, who made this happen. Across Doha, 11km and a world away, so is his little brother Nico. Inseparable until now, teammates too, they made international debuts a day apart but for different countries, Nico joining Spain while Iñaki, now 28, finally agreed to play for Ghana.


“This is allowing me to get closer to my roots, my culture, what my parents inculcated,” Iñaki says. “I’m proud of everything I’m seeing, living, representing their country. I’m very, very happy to have taken this decision.”


It shows. It also took a long time. Williams was 20 when his mother, Maria, finally told him the full story: how she was pregnant with him as she and her husband, Felix, crossed the Sahara by truck and barefoot, climbing the fence into Spain. Born in Bilbao, by then he was in the first team at Athletic, for whom he has now played 246 consecutive league games. He played once for Spain, in a 2016 friendly, but resisted approaches from Ghana.

“I feel Basque and can’t con anyone,” Williams said in October 2021, explaining that he didn’t think it right to occupy a place belonging to another player for whom playing for Ghana was everything. “When the federation president came to Bilbao in March or April to convince me, I replied with the same words I told you. When I said that, I felt it. And part of me often still feels it.”

What changed? Sitting here, listening to him, the answer appears obvious: everything. But that came next. First came the path here. “Until the president came, I hadn’t had a real, 100% chance. But I still said no.” the forward says. “They told me to think about it. I didn’t need to decide overnight.


“I talked to my parents and it made them happy to think of me playing for the country they’re from, where they feel loved, where we have the family. But I wasn’t sure. I could miss important games for Athletic, which could be a problem. You keep thinking, turning it over. Then Ghana reached the World Cup and, I’m not going to lie, that helps. But I still wasn’t clear.” 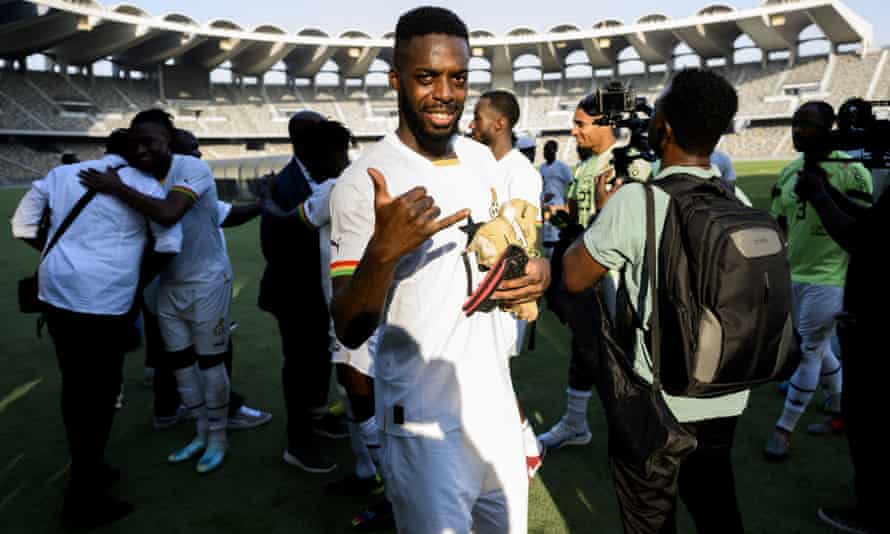 
Ghana were and they wouldn’t give up. “The coach [Otto Addo] called various times. They wanted to show me how keen they were, their affection for me, what a good footballer they thought I was. But I still wasn’t clear until I went to Ghana this summer with my parents, my family and girlfriend. We went to see the country, the family in Accra and Kumasi. It was emotional, like the whole city was waiting when I got out the car. It was incredible, incredible. And that’s where everything changed.


“That’s when I went to talk to my grandad. I told him there was a chance that I could play for Ghana at the World Cup and what did he think. He said straight away that he didn’t have long left to live and he dreamed of his grandson playing for Ghana. There was nothing left to think about then.”
Last edited: Nov 24, 2022

Richard told his grandson he could now die a happy man. “It was very emotional,” Williams says. “We never had much personal contact. They were in Ghana, I was in Spain, although there were calls. Every time he talks about his grandson he fills with pride.

“I was scared of taking this decision because of what people there would think. What people thought in Spain didn’t bother me. I didn’t know in Ghana they would see me as one of them. But there’s been no rejection anywhere. Every message was positive.

“I spoke to the captains: Jordan [Ayew], Thomas [Partey] and Daniel Amartey. I wanted their view because I didn’t want to cause any problems and they were super-receptive. Even people like Asamoah Gyan, Michael Essien, icons, got in touch to say how happy they would be for me to join.


“I now know one of the reasons people in Ghana smile, and that’s football,” Williams says, but it goes deeper. He found a place, something new; he also found himself. He says he feels more Ghanaian now, down to the name: “Everyone calls me Kweku in the national team, like my parents and Ghanaian family. You get the name according to the day you were born.”

If everything is different, there’s a certain familiarity. From the language – his English is better by the day, federation staff say – to the pre-match routines, music, even the traditional dress Ghana wore on arrival.

“My mum was happy with the photos,” Williams says, grinning. “It’s what Nico and I grew up with. I’m used to the food too. I’m a massive fan of my mum’s Ghanaian rice. I love being part of that culture, being able to live it here. I know many of the songs because we would sing at church to bring good luck. Others my parents sang us when we were little. I can understand the language, Twi, and make myself understood.

“The dressing room is totally different to Europe. At Athletic, we do pray together, arms around our shoulders, but here it’s a step again with music, happiness, people dancing. A different vibe. It’s been a lovely surprise. There are things I would like to take back to Athletic’s dressing room.” Williams laughs. “I send videos to the [Athletic] team chat. They think it’s incredible. The culture is totally different. I come from Europe, my friends are European, Basque. This is getting me closer to my roots.”

To yourself? “Yes,” he says. “I spoke to [club-mate] Óscar de Marcos about this. One of the things that most made an impact is that I’m used to being in a dressing room where, apart from me and my brother, they’re all white. Now looking to the right, to the left, to the guy in front, feeling that many have been through something similar to you, that their childhood wasn’t easy either or their parents also had to emigrate, means I identify.”


Ghana are in a group – with Portugal, Uruguay and South Korea – where “you can be first, you can be last”, Williams says. He talks about Son Heung-min, Lee Kang-in, laughs at memories of getting kicked by Pepe, “one of the hardest defenders I’ve ever faced”, and defends Cristiano Ronaldo. “The lord of the goals,” Williams calls him. “People haven’t always respected a player who’s given so, so much to football, who many of us grew up admiring, watching his football, his magnificent goals, his tireless work.”

But it is Uruguay in the final group game that most occupies them “It’s a score to settle, I know, I know,” Williams says. “When the draw happened, I was reading people on Twitter, the knife already between their teeth. It’s a game circled on the fixture list. Hopefully we can reach it on six points, fighting for first place.”

Go through and the most familiar face of all may await on the other side. At the earliest, Ghana could meet Spain, Inaki could meet Nico, in a quarter-final. They are in the same city but haven’t seen each otherand this may be, Williams says, the longest he has gone without seeing the brother for whom he has been practically a father. He admits asking the Athletic and Spain goalkeeper Unai Simón to keep an eye on Nico. “But Nico’s easy, there are young players he knows and from what he’s told me and what I’ve seen he’s enjoying it loads. I would love to have my brother here.”

He would enjoy this, too. “I really want to play an African Nations,” Williams says. “I understand people could have doubts but I’m committed. Having the World Cup matters – I prefer 1,000 times that Ghana are there – but I give my word: I’ll play the African Nations, qualifiers, everything, because I love football and I’m loving wearing the Ghana shirt so much.”
For Williams the World Cup is huge, but not an end in itself. Instead, it has proved the beginning of something bigger, more profound. “Some family arrived from Ghana this morning,” he says. “I hope to see them before I play, hug them, have them fill me with positive energy.
“I spoke to my grandad and he’s so proud, looking forward to me playing. I miss my brother, but it’s for a good cause. It’s not every day you get to play a World Cup. I’m going to follow him, he’s going to follow me and hopefully our paths cross and we can ‘paint their faces’, do them over.
“It would be incredible for two brothers to play each other at this level and I really hope it happens. God willing on 9 December, my grandad is sitting there watching the game, wanting me to beat Nico.”

thats bc hes not good enough to play for Spain. If he could, i can guarantee u hed be on Spain’s team rn lol
You must log in or register to reply here.

Half American: The Epic Story of African Americans Fighting World War II at Home and Abroad