Game of Thrones - "House Of The Dragon" Official Threads (NO SPOILERS....ZERO)

^^
Someone please send that meme to the fat fukker

Nero Christ said:
they gon say Viserys ruled in a weak era...he played plumbers in the Finals
Click to expand...

Thanks for the inspiration breh!

LOST IN THE SAUCE said:
Really helps explain why some of these shows dumb themselves down so much. There's a decent chunk of people who can't pick up on shyt even when it's shoved in their face.
Click to expand...

I never noticed this when watchin
Click to expand...

This is why I like to rewatch episodes; there’s a lot you can miss.

surf said:
ya I guess there’s a need on their end to establish the main conflict before the season ends but I think I would’ve been fine seeing things stretched out and not getting this major time jump until the start of S2…fukk it tho…ultimately I have no real complaints so far…I’m enjoying the series regardless
Click to expand...

main conflict of the season literally could've been oldman leprosy trying to stop creepy unc from seeding up his daughter, with various subplots like criston, daemons wife, his cabinet members. this shyt feels rushed in parts
G

AraÃ±a said:
Well playa if you searched any game of thrones content on google , do not go into youtube shorts there is one going around real popular too millions of views and its recent. Be careful out there and stay out of all comment sections on everything breh
Click to expand...

Shieeet I read the books and im being careful cause they might change some shiet up. Also there are plot leaks from the show too online and people are commenting it everywhere there is a chat function. The smart play would be dont watch tiktok, youtube shorts, lives etc be safe outchea.

Thank God they are doing a great Job with the show if the product was subpar it would have been a bytch fest like Marvel Fans and their theorizing about mephisto and Doom in every scene in every show. Go dark enjoy the content fukk people.

Piff Perkins said:
How do you guys feel about the characterization of characters outside of Rhae, Alicent, Viserys, Daemon, and Otto - all of whom have had ample scenes? Talking to my mom she had no idea who the guy who picked up Rhae during the feast was. Harwin Strong, ie the guard who caught her when she was walking through the city (but didn't snitch), and who is also the Hand's son.

I'm just curious what non-book readers think about that because as a reader I feel like they're fukking up establishing the side characters. Even Laenor barely had any scenes before marrying Rhae.
Click to expand...

It took me a while to figure out who Cripplefinger was, not gonna lie. The two dudes who were talking about the Hightowers lighting a green fire when Alicent walked in...I kept getting those two cacs confused for the longest

This shyt is flames, and starting to rival GOT.

LOST IN THE SAUCE said:
I get your point, but a lot of shyt repeats itself because these same issues are always there when it comes to these blood based monarchies.

A lot of it is based on real history. There have been multiple lords/royals who ran off with commoners for the sake of love, both in real life and in the ASOIAF lore. Lots of women dying in childbirth, lots of people being secretly murdered so their heir could take their land and titles. Gay lords/royals who lived secret double lives with sham marriages. b*stards being fathered and legitimized, war over who should be heir, tyrant lords/kings, weak ineffectual lords/kings, etc. This is real shyt that echoes itself over and over again all throughout ASOIAF lore and real history. It's all just a backdrop to tell the major stories around.
Click to expand...

It definitely repeats itself. I watched Rome, Spartacus, Domina, the White Queen, the White Princess, Versailles, mad documentaries on Egypt, Rome and Greece. It's the same shyt happening over and over and over throughout the ages like you said. You watch enough of these shows and you can start to predict who's going to do what.

beaniemac said:
even lord corlys knows deep down that laenor ain't from harlem

Its just a phase

Lord of the 7 Kingdoms

How did I forget the Brehlaryon theme song

itsyoung!! said:
Yea but they didnt fukk. They saw her walk in, he get ED, then leave immediately. Youre saying the whole world knows she fukked, but its been referenced no where else

no other lord, not corlys, not her aunt, no one shes soiled but some how the whole world knows? Ok

only her, the maester, leanor/his bf(assumed by the way) visyrys, alicent and cole know shes had sex

Alicent only found out it was cole when he admitted. She only found out that she had sex (with daemon, which didnt even happen) from the cripple after he mentioned the maester potion

but some how this is wide spread news to the public?

he literally said its a secret

which led to his death

Whats Otto current plot line getting banished from kings landing? That the King said his one source was wrong

you got it man

1. People did see Rhaenrya at the brothel. Everyone knows the royal family's faces. Keep in mind, breh this is an era where women aren't even really supposed to be in a room alone with a man

Now take that mentality and remember that the crown princess had her pants down to her knees and was kissing Daemon in a slimey underground brothel. That's a horrible look. But, of course, there's no cameras, only the word of 20-30 people and only a handful probably saw her. The wider city of King's Landing would hear the rumor but, for every person that believed it, there would be some that would be skeptical because it sounds ridiculous.

2. Criston Cole smashed Rhaenyra. Nobody knows but him. The rumors involve Daemon and Rhaenyra. Nobody knows Rhaenyra fukked Criston. Its Criston's own conscience eating him alive. He's a broke nobody knight. He doesn't have the money or the power to really be playing with these people. He's knows that defiling the King's daughter is a DEATH SENTENCE. He's scared like somebody that committed a crime and is now constantly looking over his shoulder thinking somebody gonna find out what he did. When ole boy said he knew, Criston thought the jig was up, and went ballistic and killed that nikka

then he was about to kill himself because he thought they were going to come for him and behead him.

3. Otto got fired because Viserys 1) didn't want to believe the rumors that his daughter is a thot (like i said above, most people wouldn't believe it) 2) Otto has shown his hand too many times that he's opportunistic and has his own agenda. This past behavior makes Viserys think that Otto is trying to besmirch his daughter's reputation to advance his own daughter Alicent and his grandson. 3) if Rhaenrya REALLY WAS out there doing something that foul, then Otto, as the Hand of the King, should have done his best to protect the Targ family. By making the problem go away. You know....his job. Otto is not there to be Viserys' friend. He's there to serve Viserys' interests. Instead he immediately goes to Viserys and says put my grandson on the throne

Reppin
Where Kings Will Dream

Mr Hate Coffee said:
Thanks for the inspiration breh!

Comic got me in tears rn. Read this in their voices too

A silent witness to all this trolling going on. 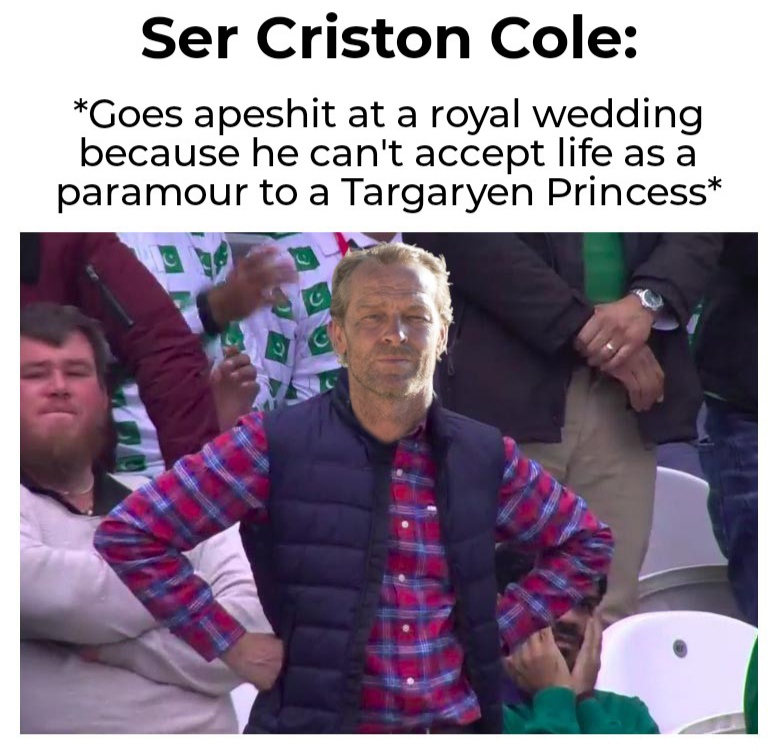 So we found the cure for Grey scale. It's the desire for psusy.
G

Ozymandeas said:
It definitely repeats itself. I watched Rome, Spartacus, Domina, the White Queen, the White Princess, Versailles, mad documentaries on Egypt, Rome and Greece. It's the same shyt happening over and over and over throughout the ages like you said. You watch enough of these shows and you can start to predict who's going to do what.
Click to expand...

And that’s because…human beings have the same troubles/drama. Nothing EVER changes. Every family goes through the same shyt every generation.
That’s why these shows can be somewhat predictable yet always entertaining. Whatever is happening on the screen has happened to you, or a cousin or a grandparent, etc.

Humanity is never-ending drama and these shows capture that so well. That’s why we love reading and watching these things. Deep down inside, it’s all so familiar.

Not to mention I left town for a family event with 3 different families present and hearing all the drama and who isn’t talking to who, and family stories coming up from 50+ years ago that are only surfacing because someone passed away, etc. It becomes fascinating after a while. This is just how people are.
You must log in or register to reply here.

Yesterday at 8:00 AM
Dog Based Gremlin