Genealogy Project traces the DNA of the oldest AA families in Fredericksburg, VA

​
Genealogist Paula Royster had a stunning announcement for those gathered Friday to hear the results of research she conducted into the origins of some of Fredericksburg’s oldest Black families—and for William Noel in particular.
“Mr. Noel, you are the only person living in these United States with this particular DNA type,” she said. “You have the same haplogroup as the first human man. Adam is with us today.” Royster is a scholar of the African diaspora and founder of the Center for African American Genealogical Research, a nonprofit whose mission is to reunite African-descended Americans with their distant African relatives.
Since this spring, Royster has worked with representatives of 10 local families to research the answers to questions they had about their family histories.

The project, called “Reclaiming Our Time,” was a product of conversations that started in 2020 about how Fredericksburg tells its Black history. Royster’s work was funded by St. George’s Episcopal Church, Trinity Episcopal Church, the Duff McDuff Green Jr. fund of the Community Foundation of the Rappahannock Region and the Mayfield Civic Association, as well as by several individuals. 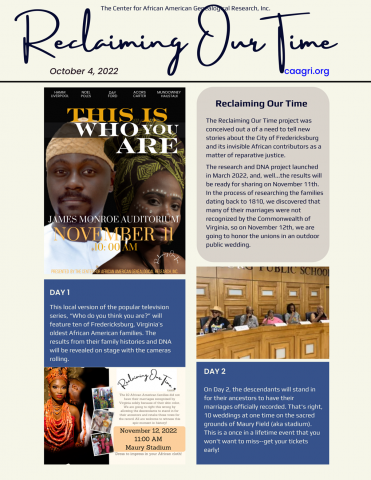 Each participant in the project also volunteered DNA for testing. Royster presented the results of her research and the DNA tests at a gathering Friday at James Monroe High School.


The results for Noel—a longtime Fredericksburg resident—were so exciting that they kept her awake at night, Royster said. His DNA is part of a group known as A000, which predates modern humans and has as its common ancestor the man from whom all other human men are descended—a person genealogists call “Y-line Adam.”
That type of DNA is extremely rare outside of Africa and was not even known to exist until 2012, when it was discovered in a South Carolina man, Royster said.
“Your DNA is 40,000 years older than his,” she told Noel.

Prior to the 2012 discovery, the oldest known haplogroup—the term for a group of organisms that share a common ancestor—could be traced only to a descendant of Y-line Adam.


“We all have these ideas about who came first,” Royster said. “You, Mr. Noel, represent the beginning of all creation.”

Noel is one of the surviving members of the segregated Walker-Grant High School class of 1950, which staged one of the earliest civil rights protests in Fredericksburg when they were denied a permit to hold their graduation ceremony at the Dorothy Hart Community Center because the facility was for whites only.
“I wonder what the story would have been like if people knew [what Noel’s DNA reveals],” Royster said.

Royster’s family history research also showed that Adegbalola is related to Spotswood Poles, a Negro League baseball player who was known as “the Black Ty Cobb.”

She discovered that project participants Tom Duckenfield and Valerie Wright are related to “Edie,” who was enslaved to Thomas Jefferson and was sent by him to Washington, D.C., to train as a chef, and that ancestors of Terry Hailstalk were free men from Angola who fought in the American Revolution.

Royster summarized the findings by referring to the slave auction block that stood at the intersection of William and Charles streets before it was moved to the Fredericksburg Area Museum.
“You can see that our history didn’t begin with that 1,000-pound block on the corner,” Royster said.
George Ford, Jr., Herman Hamm and Mark Liverpool also participated in the research and DNA project.
Last edited: Nov 15, 2022
You must log in or register to reply here.

Genealogy Project traces the DNA of the oldest AA families in Fredericksburg, VA