His story is too sad. It's a shame true black leaders haven't even seen their visions realised yet.

As a group blacks get easily distracted.

Patrice Lumumba: the most important assassination of the 20th century 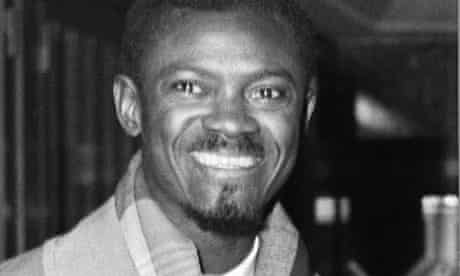 
Patrice Lumumba, the first legally elected prime minister of the Democratic Republic of the Congo (DRC), was assassinated 50 years ago today, on 17 January, 1961. This heinous crime was a culmination of two inter-related assassination plots by American and Belgian governments, which used Congolese accomplices and a Belgian execution squad to carry out the deed.

Ludo De Witte, the Belgian author of the best book on this crime, qualifies it as "the most important assassination of the 20th century". The assassination's historical importance lies in a multitude of factors, the most pertinent being the global context in which it took place, its impact on Congolese politics since then and Lumumba's overall legacy as a nationalist leader.

For 126 years, the US and Belgium have played key roles in shaping Congo's destiny. In April 1884, seven months before the Berlin Congress, the US became the first country in the world to recognise the claims of King Leopold II of the Belgians to the territories of the Congo Basin.

When the atrocities related to brutal economic exploitation in Leopold's Congo Free State resulted in millions of fatalities, the US joined other world powers to force Belgium to take over the country as a regular colony. And it was during the colonial period that the US acquired a strategic stake in the enormous natural wealth of the Congo, following its use of the uranium from Congolese mines to manufacture the first atomic weapons, the Hiroshima and Nagasaki bombs.

With the outbreak of the cold war, it was inevitable that the US and its western allies would not be prepared to let Africans have effective control over strategic raw materials, lest these fall in the hands of their enemies in the Soviet camp. It is in this regard that Patrice Lumumba's determination to achieve genuine independence and to have full control over Congo's resources in order to utilise them to improve the living conditions of our people was perceived as a threat to western interests. To fight him, the US and Belgium used all the tools and resources at their disposal, including the United Nations secretariat, under Dag Hammarskjöld and Ralph Bunche, to buy the support of Lumumba's Congolese rivals , and hired killers.


In Congo, Lumumba's assassination is rightly viewed as the country's original sin. Coming less than seven months after independence (on 30 June, 1960), it was a stumbling block to the ideals of national unity, economic independence and pan-African solidarity that Lumumba had championed, as well as a shattering blow to the hopes of millions of Congolese for freedom and material prosperity.
Click to expand...

The US-sponsored plot to kill Patrice Lumumba, the hero of Congolese independence, took place 50 years ago today
Click to expand...

I swear this mans face is one of the kindest faces you will ever see on a politician ever.

It maddens me sellouts forsake their countries and race.

Even Jesus dealt with sellouts. Will we ever get a grip on them. 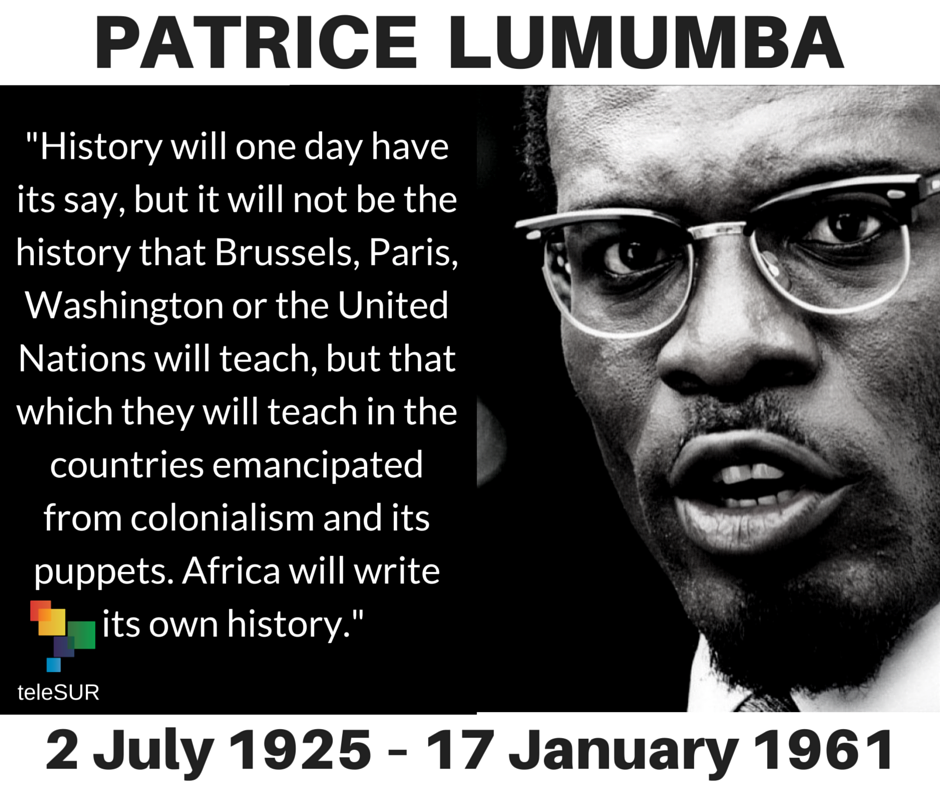 Belgians also had a hand in killing him. In fact a Belgian by the name of Gerrard Soete who was in charge of the squad that carried out the execution saved two of Lumumba's teeth after his body was dissolved in acid.

idi_Amin said:
Belgians also had a hand in killing him. In fact a Belgian by the name of Gerrard Soete who was in charge of the squad that carried out the execution saved two of Lumumba's teeth after his body was dissolved in acid.
Click to expand...

"This heinous crime was a culmination of two inter-related assassination plots by American and Belgian governments, which used Congolese accomplices and a Belgian execution squad to carry out the deed."

also the UN and Canada role

This thread should do but won't do big #s. Thanks OP

His story always angered me, they set that man up smh. Radicals in countries under colonial rule always get offed.

This is why Africa is seemingly doomed. Anyone that wants to do better for their country, better for the continent will get killed or removed. There's always someone that will do anything for his spot - he just needs the resources

The Assassination of Lumumba, by the Flemish expert on Africa Lugo De Witte, claimed that he was assaulted in the presence of Belgian officers, tortured in a villa guarded by Belgian troops, and shot by an execution squad supervised by a Belgian captain.

His body was later exhumed by a Belgian police commissioner, Gerard Soete, and dissolved in acid.

Mr Soete admitted on Belgian television last year that he had kept two of the victim's teeth, prompting calls for their return to Congo.

He insisted that he had later thrown them into the North Sea.

"We are doing this not for revenge but to know the truth," said Mr Lumumba, whose case is being funded by the Belgian organization Affaire Patrice Emery Lumumba.
Click to expand...

bdkane said:
This thread should do but won't do big #s. Thanks OP
Click to expand...

nikkaz don't give asf. They would rather thrist over IG Models and complain about trannies and bedwenches.

56 years ago today the United Nations launched a peacekeeping force that contributed to one of the worst post-independence imperial crimes in Africa. The Organisation des Nations Unies au Congo (ONUC) delivered a major blow to Congolese aspirations by undermining elected Prime Minister Patrice Lumumba. Canada played a significant role in ONUC and Lumumba’s assassination, which should be studied by progressives demanding Ottawa increase its participation in UN “peacekeeping”.

After seven decades of brutal rule, Belgium organized a hasty independence in the hopes of maintaining control over the Congo’s vast natural resources. When Lumumba was elected to pursue a genuine de-colonization, Brussels instigated a secessionist movement in the eastern part of country. In response, the Congolese Prime Minister asked the UN for a peacekeeping force to protect the territorial integrity of the newly independent country. Washington, however, saw the UN mission as a way to undermine Lumumba.

Siding with Washington, Ottawa promoted ONUC and UN Secretary General Dag Hammarskjold’s controversial anti-Lumumba position. 1,900 Canadian troops participated in the UN mission between 1960 and 1964, making this country’s military one of its more active members. There were almost always more Canadian officers at ONUC headquarters then those of any other nationality and the Canadians were concentrated in militarily important logistical positions including chief operations officer and chief signals officer.

Canada’s strategic role wasn’t simply by chance. Ottawa pushed to have Canada’s intelligence gathering signals detachments oversee UN intelligence and for Quebec Colonel Jean Berthiaume to remain at UN headquarters to “maintain both Canadian and Western influence.” (A report from the Canadian Directorate of Military Intelligence noted, “Lumumba’s immediate advisers… have referred to Lt. Col. Berthiaume as an ‘imperialist tool’.”)

To bolster the power of ONUC, Ottawa joined Washington in channelling its development assistance to the Congo through the UN. Ghanaian president Kwame Nkrumah complained that this was “applying a restriction to Congo which does not apply to any other African state.” Ottawa rejected Nkrumah’s request to channel Congolese aid through independent African countries.

Unlike many ONUC participants, Canada aggressively backed Hammarskjold’s controversial anti-Lumumba position. External Affairs Minister Howard Green told the House of Commons: “The Canadian government will continue its firm support for the United Nations effort in the Congo and for Mr. Hammarskjold, who in the face of the greatest difficulty has served the high principles and purposes of the charter with courage, determination and endless patience.”

Ottawa supported Hammarskjold even as he sided with the Belgian-backed secessionists against the central government. On August 12 1960 the UN Secretary General traveled to Katanga and telegraphed secessionist leader Moise Tchombe to discuss “deploying United Nations troops to Katanga.” Not even Belgium officially recognized Katanga’s independence, provoking Issaka Soure to note that, “[Hammarskjold’s visit] sent a very bad signal by implicitly implying that the rebellious province could somehow be regarded as sovereign to the point that the UN chief administrator could deal with it directly.”

The UN head also worked to undermine Lumumba within the central government. When President Joseph Kasavubu dismissed Lumumba as prime minister — a move of debatable legality and opposed by the vast majority of the country’s parliament — Hammarskjold publicly endorsed the dismissal of a politician who a short time earlier had received the most votes in the country’s election.

Lumumba attempted to respond to his dismissal with a nationwide broadcast, but UN forces blocked him from accessing the main radio station. ONUC also undermined Lumumba in other ways. Through their control of the airport ONUC prevented his forces from flying into the capital from other parts of the country and closed the airport to Soviet weapons and transportation equipment when Lumumba turned to Russia for assistance. In addition, according to The Cold War “[the Secretary General’s special representative Andrew] Cordier provided $1 million — money supplied to the United Nations by the US government — to [military commander Joseph] Mobutu in early September to pay off restive and hungry Congolese soldiers and keep them loyal to Kasavubu during his attempt to oust Lumumba as prime minister.”

To get a sense of Hammarskjold’s antipathy towards the Congolese leader, he privately told officials in Washington that Lumumba must be “broken” and only then would the Katanga problem “solve itself.” For his part, Cordier asserted “[Ghanaian president Kwame] Nkrumah is the Mussolini of Africa while Lumumba is its little Hitler.”
Click to expand...