Hurricane G dies at 52 after battle with lung cancer

Rapper Hurricane G dies at 52 after battle with lung cancer​ 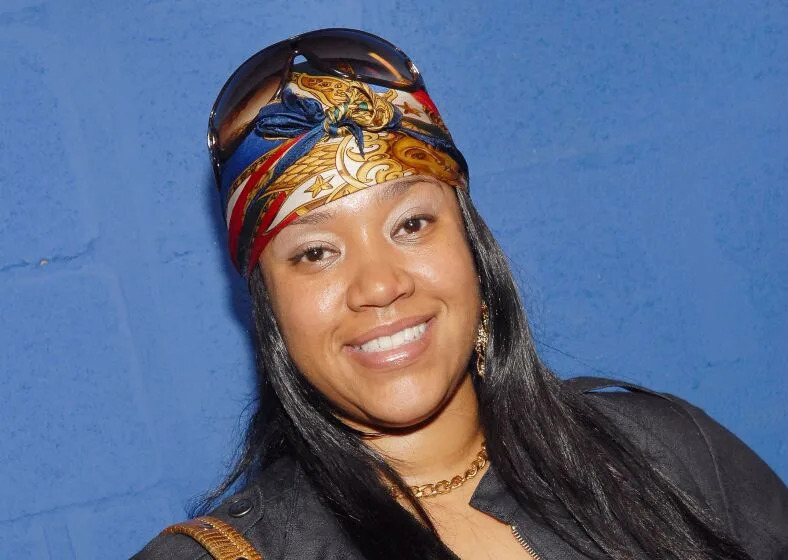 Hurricane G attends the 2006 Lifebeat Presents La Nueva Generacion Concert in New York. (Ray Tamarra / Getty Images)
For the record:
4:12 p.m. Nov. 7, 2022: An earlier version of this post said Hurricane G was featured on Redman songs including “Dare Iz a Darkside.” She was actually featured on “We Run N.Y.,” which was a track on the album “Dare Iz a Darkside.”
New York Rapper Hurricane G, known for songs including "El Barrio" and "Underground Lockdown," has died after a battle with lung cancer.
Fellow rapper Erick Sermon, who shares a daughter with G, confirmed her death Sunday in a statement posted on Instagram. G, whose real name was Gloria Rodriguez, rose to prominence in the 1990s after collaborating with rapper Redman on tracks such as "Tonight's da Night" and "We Run N.Y.," according to the Daily Beast.

"My heart is hardened today," Sermon wrote on Instagram. "One of my good friends…. my oldest daughters mother passed away today #HURRICANEGLORIA was also a legend in her own right in the Hiphop community. One of the first puertorican female rappers She rapped with me. ...
"She paved the way ... she was in all the Hiphop magazines with all the top females at the time ... She will be missed all around the world. I can’t believe this. Pray for us. Beautiful blessings. She was a beautiful person a wonderful mother as real as they come. We love u G."
In May, Hurricane G and Sermon's daughter Lexus revealed on Facebook that her mother had been diagnosed with Stage 4 lung cancer: “I dont know how many of you understand what that means but even after 30 years of life Im still trying to process it myself," she wrote. "I have never cried so much in my life I have never felt so disconnected from reality in my life. Yet my mom still manages to be the one to hold it together and say 'dont worry baby everythings gonna be alright.'"
G was known for her ability to rap in both English and Spanish. When recording and performing in Spanish, G would often rap in the Nuyorican dialect, representing New York City’s Puerto Rican community, according to her MySpace biography.
The artist’s music career took off when she signed with H.O.L.A. Recordings, a New York-based label whose acronym stands for Home of Latino Artists. Through H.O.L.A., G released her debut studio album, “All Woman,” in September 1997. The record featured the tracks “El Barrio” and “Underground Lockdown,” as well as “Mama” and “Boriqua Mami.”
A promising newcomer on the New York entertainment scene, G became the first female member of the East Coast hip-hop collective called the Def Squad, which also included Sermon of EPMD, Redman and Keith Murray, according to G’s MySpace bio.
Among those who paid tribute to G on social media was music producer Domingo Padilla, who worked with G on “All Woman” and remembered the emcee as “a really kind hearted funny person,” adding, “but when she was mad stay out her way…LOL.”
“We recorded that album in my apartment in Ozone Park Queens on a Tascam 388 and I took the whole reel machine to 78/88 studios and dumped the music to 2 inch reels then mixed it with Rahsaan Cus Stephens in Unique and Chung King studios,” Padilla wrote on Facebook.
“I saw her make a famous radio personality cry in a studio and when I drove Gloria home we argued about why she did that and she kept it real with me she said ‘Domingo that b— don't fool me she is a 2 face.’ Gonna miss speaking to her on the phone and [hearing] her say "Domingo you got that funky a— fire for me or what motherf—‘ … R.I.P Gloria 'Hurricane G' Rodriguez.”
This story originally appeared in Los Angeles Times.

tonights the night is one of my fav songa

My condolences to E and Redman

Damn I remember Redman used to rap about her a lot.
T

Reppin
Deep in your anus...

Reppin
Jersey, Trapped in the 90's

Cancer is a terrible disease. Lost my uncle to prostate cancer this year. Seeing it up close how debilitating it is was hard. It really affects the whole family

Damn. She was a fixture in early 90s NY hip-hop. RIP sis.

Wow. I didn't even know this. She only had one album.

RIP, did not know what she passed from, seeing this late.