The first quarter of 2022 saw a nearly 33% increase year over year in marijuana violations among commercial vehicle drivers. Stacker looks at the rise in truckers being pulled from the road and the potential effects on the supply chain. 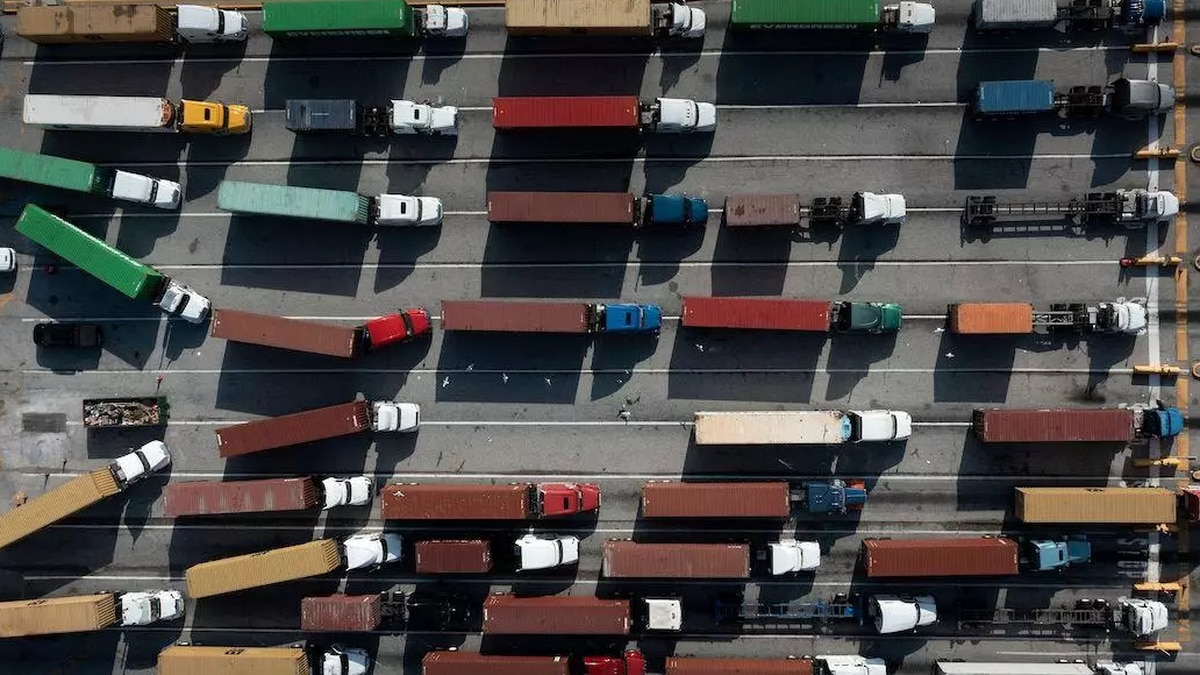 (Stacker) - Delayed packages, bare grocery store shelves, and inflated prices have become the norm for American consumers over the past two years. While the COVID-19 pandemic has been the catalyst, there are other challenges causing supply chain issues, including a lack of truck drivers to transport goods from one place to another. In late 2021, the American Trucking Associations reported that the driver shortage had risen to an all-time high of 80,000, partly due to the aging population and shrinking wages.
In response, the Biden administration vowed in December to get more truck drivers on the road by boosting recruitment efforts and expediting the issuing of commercial licenses. However, that won’t have an effect on another hurdle: disparate marijuana laws across the U.S. that are contributing to an increase in violations. In 2022, a growing number of truckers are being taken off the job, which could soon worsen the already suffering supply chain.

As more states legalize recreational marijuana—four of which did so in the past year and three more are expected to by the end of 2022—more truck drivers have tested positive for the substance. As of April 1, 2022, 10,276 commercial vehicle drivers have tested positive for marijuana use. By the same time in 2021, there had been 7,750 violations. That’s a 32.6% increase year over year.

Truck drivers who travel cross-country face inconsistent state regulations as 19 states have legalized recreational marijuana and 37 states permit it for medicinal purposes. But even if a driver used marijuana or hemp-based products like CBD while off duty in a state where those substances are legal, they could still be faced with a violation due to the Department of Transportation’s (DOT) zero-tolerance policy at the federal level.

Stacker looked at what’s causing thousands of truckers to be removed from their jobs, and the looming domino effect of the continued supply chain disruptions.

Under regulations set forth by the DOT, truck drivers are tested for drug use—including marijuana—prior to starting a new job. They can also be tested at random, as well as after accidents. In January 2020, the DOT’s Federal Motor Carrier Safety Administration also upped the random drug testing rate from 25% of the average number of driver positions to 50%. Truck drivers are mainly screened for drug use via urinalysis, but there are now new saliva tests being proposed as well.

At worst, if a driver fails just one drug test, that can be grounds for termination under DOT regulations. At best, they are temporarily taken off the road and required to complete an evaluation with a substance misuse professional who determines their rehabilitation process, which can sometimes take months.

As of January 2020, employers are also required to list commercial drivers who fail a drug test in the FMCSA’s Drug & Alcohol Clearinghouse. These violations remain searchable for five years. Potential employers are also required to check the Clearinghouse to see if a commercial driver had any previous violations, which would prevent them from being hired.

In recent years, more states have legalized both recreational and medical marijuana, making it more widely available and used. However, marijuana use is still prohibited for commercial truck drivers, state laws and medical prescriptions aside. According to the FMCSA, “a driver may not use marijuana even if [it] is recommended by a licensed medical practitioner.” The DOT has maintained its zero-tolerance stance for marijuana use even as it’s become legalized, saying, “Legalization of marijuana use by States and other jurisdictions also has not modified the application of U.S. Department of Transportation drug testing regulations.”


Truck drivers with violations tend to not return, adding to the shortage and supply chain woes​

Shortages, factory closures, and goods waiting to be unloaded at ports are just some of the current issues affecting the supply chain across America. Trucking transports 72% of products within the U.S., according to a report from the White House, but a growing number of commercial drivers are sidelined for marijuana use.

The return-to-duty process that commercial vehicle drivers must undergo once faced with a marijuana violation can keep them from returning to work at all. According to the FMCSA’s monthly report, 89,650 commercial drivers are currently in prohibited status as of April 1, 2022, but 67,368 of them have not begun the RTD process.

If violations continue at the current rate, the truck driver shortage will further disrupt the supply chain, which means higher prices not just for commodities but the cost of living at large.
B

Where the fukk are the smilies ?
B

BlackBall said:
Where the fukk are the smilies ?
Click to expand...

Keep fake piss with you. It's 20$ a bottle. Next problem please

CouldntBeMeTho said:
Keep fake piss with you. It's 20$ a bottle. Next problem please
Click to expand...

Do you really want someone high driving a 18 wheeler thru your neighborhood or behind your Car on the highway?

You can't tell me this inflation shyt isn't partly manufactured

Ain't That Something said:
You can't tell me this inflation shyt isn't partly manufactured

Behind what logic? Who's gaining anything by not having products on shelves?

Thing with conspiracies flying all the time is most of them are illogical. Like there's no play here for for society, consumers, manufacturers anyone... But yet you say you can't be told it's not manufactured. If you so sure you should be able to elaborate on what the play is and who gains from this manufactured situation.

Amestafuu (Emeritus) said:
Behind what logic? Who's gaining anything by not having products on shelves?

Thing with conspiracies flying all the time is most of them are illogical. Like there's no play here for for society, consumers, manufacturers anyone... But yet you say you can't be told it's not manufactured. If you so sure you should be able to elaborate on what the play is and who gains from this manufactured situation.
Click to expand...

Basic supply and demand brehski. But I can be hella wrong that's ok too

Ain't That Something said:
Basic supply and demand brehski. But I can be hella wrong that's ok too

i'm just challenging you to complete your own thought process. stores don't get to jack up prices with a limited supply without paying more themselves for the limited goods themselves so it's not a win on their end. furthermore they still losing sales volume wise with the delays having bare shelves and customers who walk out without buying what they need. that's not a valid business strategy for stores or manufacturers who are having to spend more in time money handling logistics. more time in transit for goods is actually lost revenue for manufacturers

let's stop making up conspiracies for everything please. if you feel the need to at least test out the logic in what you are putting out there as a conspiracy.

there is artificial inflation for example in the diamond industry is and the oil industry at times. they do it by price fixing and control of supply. what we are going through right now is affecting every industry that including people who move perishable goods like foods which can't be delivered expired down to electronics manufacturers like sony who cant meet the demand for their PS5's, they have a MSRP (set retail price) so for example sony can't increase the price of a PS5 but scalpers can, so that doesn't benefit them as a manufacturer.. they are actually losing by not being able to transition more players to next gen consoles.
Last edited: May 22, 2022

Driving high? No. In cali they have dui like tests for marijuana if they think someone high and driving.

I think the under lying issue is, if they get done with a day of driving, in a cannabis legal state, and want to smoke to relax after a day of driving, they can still get in trouble. As weed stays in your system for a long long time(compared to most things).


Example: imagine smoking weed at a stop in Cali (weed legalized) on July 4th but you get tested in Alabama (weed not legalized) on July 10th. Still a high chance youll test positive for weed in your system, even if you didnt smoke for few days. This would be a violation I believe if im understanding correctly.

Obviously not but they should be able to smoke when they are off just like they can get full of liquor....
R

Freedman said:
Obviously not but they should be able to smoke when they are off just like they can get full of liquor....
Click to expand...

This. Testing for marijuana is not the same as testing for alcohol and most people who have ever been drug tested know this.

This is no different than athletes traveling during the season and partaking where it's legal. That should be nobody business but there own
You must log in or register to reply here.