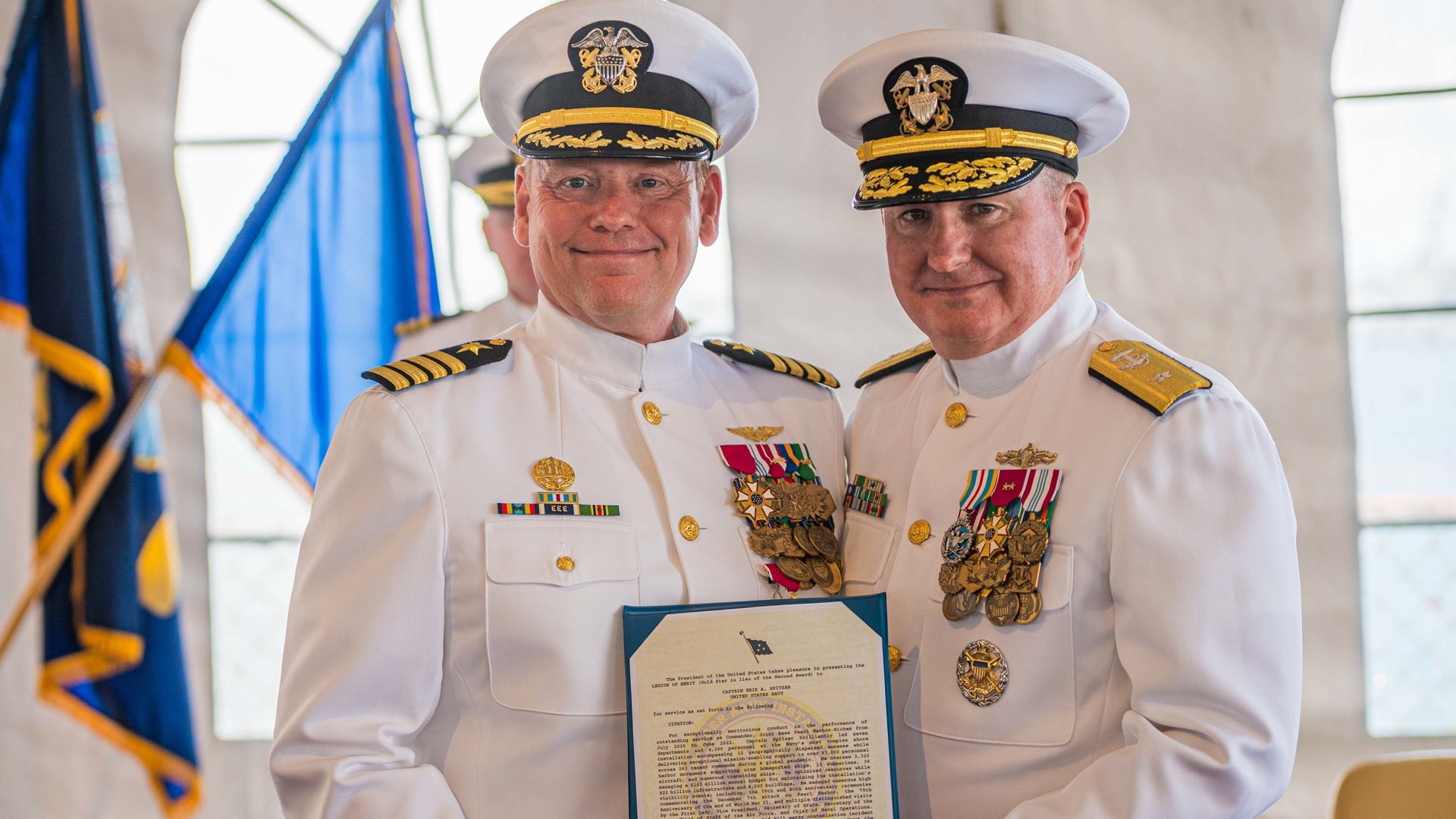 The commander of Joint Base Pearl Harbor-Hickam was awarded the Legion of Merit months after the base’s bungled response to a water contamination crisis. 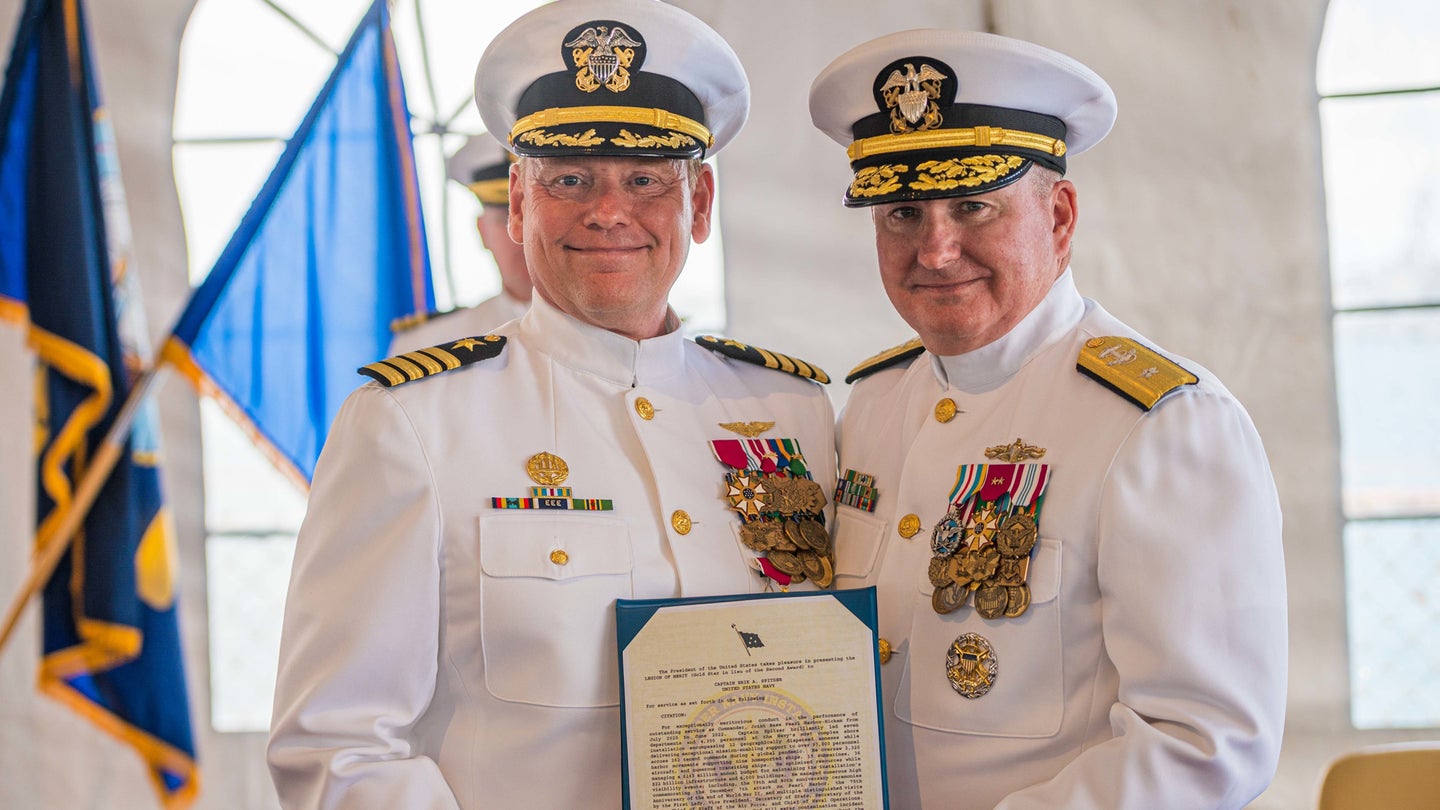 The Navy commander of a joint military base in Hawaii where thousands were poisoned by water contaminated during a massive fuel leak was recently awarded the Legion of Merit upon retirement.

Capt. Erik Spitzer, formerly the commander of Joint Base Pearl Harbor-Hickam, was relieved of command on June 14 by Capt. Mark Sohaney, according to photos released by the Navy. Spitzer was criticized in the midst of the water crisis for providing conflicting guidance that residents’ water was safe in the days after the fuel leak. But during the change of command ceremony, Spitzer was awarded the Legion of Merit Award, which is awarded to service members “for exceptionally outstanding conduct in the performance of meritorious service to the United States.” His award citation praised his response to the leak at the Red Hill fuel storage facility and says his role led to the “expeditious restoration of clean water.” 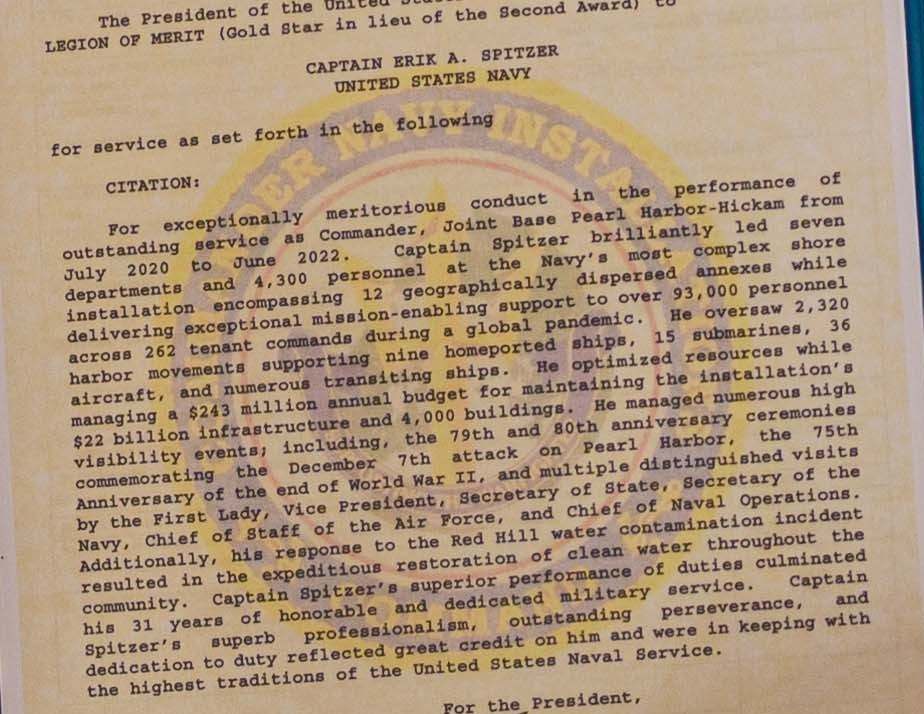 The Navy did not respond to questions about if Spitzer, or any other Navy officials, were reprimanded for their roles in the crisis.

Spitzer retired in June, according to The Washington Post, but less than a year before that he was one of the many Navy officials overseeing the service’s response to a significant water contamination crisis. On Nov. 20, 2021, tens of thousands of gallons of fuel spilled from a low point drain valve, where it had drained after a previous mishandled spill in May. While the majority of the almost 20,000 gallons of fuel were recovered after the leak in November, roughly 5,500 gallons were not.

Some of that unrecovered fuel is believed to have contaminated the base’s water supply, making its way into military families’ drinking water. Residents reported various health effects from the water, including hair loss, headaches, nausea, skin rashes, and stomach pains. In one town hall with Navy leadership, a woman shared emotional testimony about her family’s beloved dog, which she said had to be put down due to health complications believed to be from the contaminated water.

Navy leaders and officials were criticized for providing conflicting information and not acting proactively enough in their communication with residents. One such instance came on Nov. 29 — a day after people began complaining of their water’s smell and appearance — when Spitzer told residents of Pearl Harbor-Hickam that the water was safe to drink.

“I can tell you at this point that there are no immediate indications that the water is not safe,” Spitzer said. “My staff and I are drinking the water on base this morning, and many of my team live in housing and drink and use the water as well. … We have not recommended any schools be closed, and we have not sent out any notifications telling people to not use the water.”

The next day, however, the Hawaii Department of Health urged “all Navy water system users” to “avoid using the water for drinking, cooking, or oral hygiene.” It was one of the more confusing moments for families who were trying to figure out what to do and what information to trust. An internal Navy investigation released last week acknowledged that Spitzer’s message to residents was one of four “key friction points” that negatively impacted the public’s trust in the Navy.

“This immediate turn around in messaging, along with the report three days later that the Red Hill well was secured prior to the CO’s message to families, combined to hurt public trust,” the Navy’s investigation found. 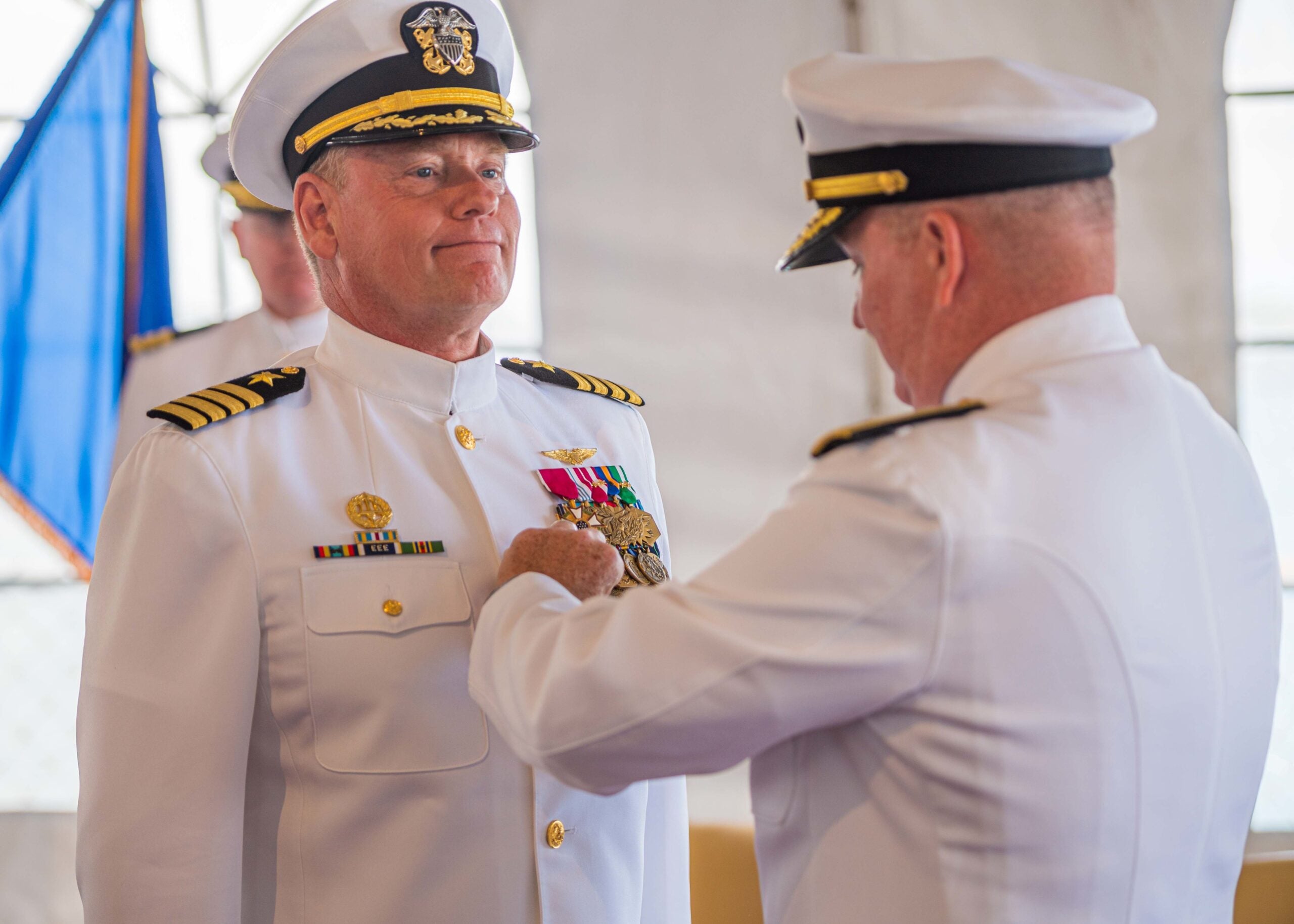 Damn. When the military dont give a fukk about cacs, you know we in the last days

When I mobilized to go to Iraq in 2003 we went to this raggedy ass national guard base called Camp Atterbury. The water quality was terrible. The water came out brown sometimes yet the permanent staff there told us the water was fine but had stacks of bottled water outside of their offices

Trump and sandy hook shooting should have let them know that

Charlie Hustle said:
When I mobilized to go to Iraq in 2003 we went to this raggedy ass national guard base called Camp Atterbury. The water quality was terrible. The water came out brown sometimes yet the permanent staff there told us the water was fine but had stacks of bottled water outside of their offices

I would have stolen the bottled waters.
Last edited: Jul 7, 2022

News flash they never gave a fukk about cacs.. they always been a means to an end

you really believe you are a second class citizen, huh?

I couldn’t imagine ever saying anything like this, as a self respecting man and human fukking being.
You must log in or register to reply here.