No Fap/Semen Retention Dangerous? (Why There Are Carcinogens in Your Sperm - Article)

Why There Are Carcinogens in Your Sperm​

Or in more scientific-sounding terms: “It’s a prostatic stagnation hypothesis,” said Giles to the BBC. “The more you flush the ducts out, the less there is to hang around and damage the cells that line them.”

Giles added to New Scientist, “Also, the prostate, in the course of making seminal fluid, concentrates some powerful biological molecules to a very high degree to form that seminal fluid, and it’s a very reactive brew of ingredients. We feel that may be carcinogenic too.” Additionally, studies in dogs show that carcinogens such as 3-methylcholanthrene, a component of cigarette smoke, are concentrated in prostate fluid as well.


Furthermore, in 2006, researchers from the Medical Research Council’s Human Reproductive Sciences Unit at the University of Edinburgh discovered that the high concentration of prostaglandin — a hormone of sorts — in semen makes diseases of the female reproductive organs worse (including cervical and uterine cancer). While prostaglandin is naturally produced by the cells that line the female reproductive organs, the concentration of prostaglandin in seminal fluid is 1,000 times higher than that normally found in those cells. “Sexually active women who are at risk of cervical or uterine cancer should encourage their partners to wear a condom to prevent increased exposure to the prostaglandins that might make their condition worse,” lead researcher Henry Jabbour wrote.
Click to expand... 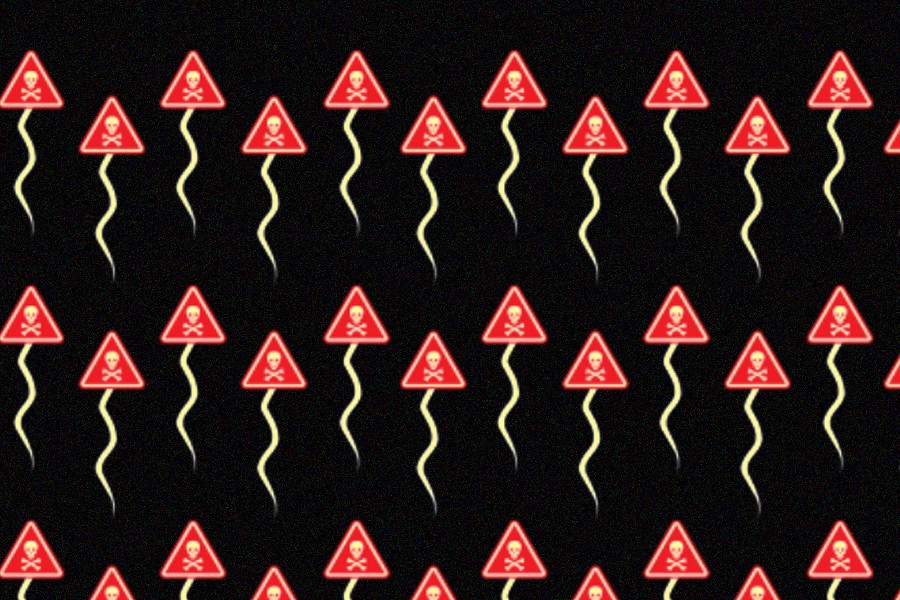 Why There Are Carcinogens in Your Sperm

They say cancer-causing chemicals could build up in the prostate if men do not ejaculate regularly.

And they say sexual intercourse may not have the same protective effect because of the possibility of contracting a sexually transmitted infection, which could increase men's cancer risk.

Australian researchers questioned over 1,000 men who had developed prostate cancer and 1,250 who had not about their sexual habits.

They found those who had ejaculated the most between the ages of 20 and 50 were the least likely to develop the cancer.

The protective effect was greatest while the men were in their 20s.

Men who ejaculated more than five times a week were a third less likely to develop prostate cancer later in life.

Previous research has suggested that a high number of sexual partners or a high level of sexual activity increased a man's risk of developing prostate cancer by up to 40%.

But the Australian researchers who carried out this study suggest the early work missed the protective effect of ejaculation because it focussed on sexual intercourse, with its associated risk of STIs.

Graham Giles, of the Cancer Council Victoria in Melbourne, who led the research team, told New Scientist: "Had we been able to remove ejaculations associated with sexual intercourse, there should have been an even stronger protective effect of ejaculations."

The researchers suggest that ejaculating may prevent carcinogens accumulating in the prostate gland.

The prostate provides a fluid into semen during ejaculation that activates sperm and prevents them sticking together.

The fluid has high concentrations of substances including potassium, zinc, fructose and citric acid, which are drawn from the bloodstream.

But animal studies have shown carcinogens such as 3-methylchloranthrene, found in cigarette smoke, are also concentrated in the prostate.

"It's a prostatic stagnation hypothesis. The more you flush the ducts out, the less there is to hang around and damage the cells that line them."

A similar connection has been found between breast cancer and breastfeeding, where lactating appeared to "flush out" carcinogens, reduce a woman's risk of the disease, New Scientist reports.

Another theory put forward by the researchers is that ejaculation may induce prostate glands to mature fully, making them less susceptible to carcinogens.

Dr Chris Hiley, head of policy and research at the UK's Prostate Cancer Charity, told BBC News Online: "This is a plausible theory."

She added: "In the same way the human papillomavirus has been linked to cervical cancer, there is a suggestion that bits of prostate cancer may be related to a sexually transmitted infection earlier in life."

Anthony Smith, deputy director of the Australian Research Centre in Sex, Health and Society at La Trobe University in Melbourne, said the research could affect the kind of lifestyle advice doctors give to patients.

Higher frequency of ejaculation is associated with lower risk of prostate cancer, as a previous study led by a School of Public Health researcher confirmed.


Now, Jennifer R. Rider, assistant professor of epidemiology, and her colleagues have found a clue as to why, identifying molecular-level changes in prostate tissue.


The study, published in European Urology, finds evidence that more frequent ejaculation affects the expression of 409 genes and six biological processes. The study may support the “prostate stagnation hypothesis,” where carcinogens accumulate in the prostate between ejaculations and affect cells’ genome and metabolic processes.


“These molecular changes in the prostate persist for many years,” says Rider, who served as senior author on the study. “Understanding the biological links between ejaculation and prostate tumor development could lead to new behavioral or medical strategies for prevention.”


As in the previous study, the researchers used data from participants in the Health Professionals Follow-Up Study (HPFS), a prospective study of 31,925 men. This time, the researchers looked at the tumor tissue and adjacent normal prostate tissue of 157 participants who were diagnosed with prostate cancer between 1992 and 2004 and subsequently had part or all of their prostates removed. In 1992, participants had self-reported ejaculation frequency for when they were 20-29 years old, 40-49 years old, and in the previous year, 1991.


Next, focusing on ejaculation frequency in 1991, the researchers found associations with six different biological processes at the cellular level. The most significant association was with ubiquitin-mediated proteolysis, which is involved in cell cycle regulation. The researchers also noted an association between higher rates of ejaculation and cells producing and exporting more citrate, a component of semen, because lower citrate production is a distinguishing feature of prostate cancer.


Rider notes the study used sample tissue only from men with a prostate cancer diagnosis. Next, she says, “we are interested in looking at whether expression of the genes and processes identified in the current study are able to predict future risk of prostate cancer development.”


Does this prove doing no fap/semen retention is actually dangerous and unhealthy to do??

Reppin
Leader of the righteous Brehs!

livin' outside of the matrix

We got the Nutty Professor over here

Who provided the funding for this "research"?.....p0rnhub?

Extremes are always bad. No fap is as bad as jerking off multiple times every day. Once a day or once every other day is healthy and reasonable. Moderation is always the key to life. Never excess.

How so? Is looking at attractive women in real life also bad?

this study just came out or something?
guess what next month is

I dunno why people coopt cac behavior. Nuts need to be busted, in this incel era, there are all these rules and just ridiculous theories talmbout semen retention

It’s funny how you always tag ya lil squad lmaoo..

but on topic, the issue is your body only being stimulated by only pornographic images/videos. Even amateur films..you are being stimulated by watching another man pleasure a woman you find sexually attractive.. a man that looks like the average joe. That does something to your psyche. Remove pornography and you’re still repeatedly activating that blood rush done there.. add onto the fact if you have that death grip on it

you know how pathetic you look tryna jumpstart yourself in front of a relatively attractive woman?

imagination > everything else. Also, using lotion & a slower stroke
L

Moderation is the key to life

Why There Are Carcinogens in Your Sperm


Does this prove doing no fap/semen retention is actually dangerous and unhealthy to do??

NOT AT ALL .. YOU CAN ALSO FIND STUDIES THAT SHOW DEPLETING YOURSELF OF SKEET IS UNHEALTHY ..

SO LIKE WIT MOST THINGS, IT REALLY DEPENDS ON WHAT U CHOOSE TO BELIEVE

AND SINCE UR A JERKER, U DECIDE TO LEAN TOWARDS THOSE STUDIES