The woman has receipts—and a “get well” card she says the football star, now a Senate candidate, sent her.
www.thedailybeast.com

she says the football star, now a Senate candidate, sent her.

Herschel Walker, the football legend now running for Senate in Georgia, says he wants to completely ban abortion, likening it to murder and claiming there should be “no exception” for rape, incest, or the life of the mother.
But the Republican candidate has supported at least one exception—for himself.
A woman who asked not to be identified out of privacy concerns told The Daily Beast that, after she and Walker conceived a child while they were dating in 2009, he urged her to get an abortion. The woman said she had the procedure and that Walker reimbursed her for it.

She supported these claims with a $575 receipt from the abortion clinic, a “get well” card from Walker, and a bank deposit receipt that included an image of a signed $700 personal check from Walker.

The woman said there was a $125 difference because she “ball-parked” the cost of an abortion after Googling the procedure and added on expenses such as travel and recovery costs.
Additionally, The Daily Beast independently corroborated details of the woman’s claims with a close friend she told at the time and who, according to the woman and the friend, took care of her in the days after the procedure.
The woman said Walker, who was not married at the time, told her it would be more convenient to terminate the pregnancy, saying it was “not the right time” for him to have a child. It was a feeling she shared, but what she didn’t know was that Walker had an out-of-wedlock child with another woman earlier that same year.
Asked if Walker ever expressed regret for the decision, the woman said Walker never had. Asked why she came forward, the woman pointed to Walker’s hardline anti-abortion position.
“I just can’t with the hypocrisy anymore,” she said. “We all deserve better.”
After The Daily Beast reached out to the Walker campaign for comment, Robert Ingram, a lawyer representing both the campaign and Walker in his personality capacity, responded.
“This is a false story,” Ingram said in a phone call, adding that he based that conclusion on anonymous sources.
“All you want to do is run with stories to target Black conservatives,” he said. “You focus on Black conservatives.”

Ingram asked The Daily Beast to disclose the identity of the woman, but we declined.
According to the $575 receipt, the abortion took place on Sept. 12, 2009. And according to the Bank of America deposit receipt, Walker wrote the woman a check for $700 on Sept. 17, 2009. The check was deposited two days later.
The woman, who also provided proof of her romantic relationship with Walker, told The Daily Beast that he mailed her the check inside the “get well” card.
The front of that card features a drawing of a steaming cup of tea and reads, “Rest, Relax…” The message continues on the inside of the card: “…Recover.”

The card is signed, “Pray you are feeling better,” with an “H” in Walker’s distinctive autograph flourish.

The woman, a registered Democrat who still communicates with Walker, said he did not tell her about his plan to run for the Senate before his announcement in August 2021. Since then, however, one of Walker’s top surrogates has asked her repeatedly if she would be willing to vouch for his character, reaching out as recently as this August.
In a 40-minute phone call this June about one of his out-of-wedlock children, The Daily Beast pressed Walker repeatedly on whether he had ever knowingly had an abortion with any of his past partners. After dodging the question multiple times, he ultimately said he had not.

Weeks later, a Democratic activist pretending to be a Walker supporter posed the same question at a campaign event, asking the NFL star whether he had ever “funded” or “caused somebody to have an abortion.”
“No,” Walker replied twice, which the activist recorded on video.

Walker is running in one of the most important races in the country, and the outcome could determine which party controls the Senate. It’s also one of the closest races in the country, with recent polls showing Walker just behind his Democratic opponent, incumbent Sen. Raphael Warnock.
But Walker—who according to his ex-wife held a gun to her head and was “gonna blow my brains out”—has been continually rocked by reports that he has liedabout his past and covered up several love children. Still, the claim that he not only urged a romantic partner to have an abortion but paid for it could be the most explosive revelation yet.
Following the Supreme Court’s repeal of Roe v. Wade in July, abortion rights have become a pivotal campaign issue across the country. The ruling fueled spikes in voter registration and turnout in contests nationwide, especially among women. A recent CBS/YouGov survey found that likely Georgia voters who said the abortion issue is “very important” were more than twice as likely to support Warnock, 67 percent to Walker’s 32 percent.

In such an environment, many Republicans vying for mainstream support in tight races have tried to play to the center, hoping not to alienate women voters.
Not Walker.
Abortion has been front and center in Georgia for months—thanks in large part to Walker’s own comments. The University of Georgia football icon has drawn media attention with his outspoken, absolutist position in support of a total ban, both statewide and federally. He has repeatedly likened the procedure to murder, and does not support any exceptions, including for rape, incest, or the life of the mother—instances Walker has dismissed as “excuses.”
“There’s no exception in my mind,” Walker told reporters in May. “Like I say, I believe in life. I believe in life.”


Herschel Walker Lied About His Secret Kids to His Own Campaign​

Walker has also said that his anti-abortion position is not a recent shift, claiminglast month that he has “always” been “for life.”

Two weeks ago, Walker broke with other Senate candidates when he volunteered his support for a 15-week federal ban put forth by Sen. Lindsay Graham (R-SC). Other candidates ducked comment on the Graham proposal, but Walker told Politico that, if elected, he “WOULD” back such a bill.
“Raphael Warnock wants to protect the killing of babies right up to the moment of birth. We need to do better,” Walker told Politico in a statement. “I am a proud pro-life Christian, and I will always stand up for our unborn children. I believe the issue should be decided at the state level, but I WOULD support this policy.”
At a July campaign event for Georgia farmers, Walker was asked if he thought voters would have the state’s recently passed ban in mind when they cast ballots in November.
“People aren’t concerned about that,” Walker said, according to The Gainesville Times. “People are concerned about the gas, they’re concerned about food. They’re not even talking about that. That’s not what I’m hearing about.”
Four days earlier, Walker said at another campaign stop that “there’s not a national ban on abortion right now and I think that’s a problem. I’m pro-life and I’m not going to make an excuse for it.”

While that stance may lose some voters, it has endeared him to anti-abortion advocates, who have held him up as a champion for the cause.
“Herschel Walker will be a most effective champion for unborn babies and their mothers in Washington and he has demonstrated the passion and perseverance it takes to win the critically important Georgia Senate race,” said Carol Tobias, the president of National Right to Life, whose group endorsed Walker over his Republican primary opponents in April.
Walker is twice-married, with four known children, all from different mothers.

The Daily Beast revealed in July that Walker had lied to his own campaign staffwhen he denied the existence of two of those children, whom Walker had also kept from the public for years despite speaking out against fatherless homes in the Black community.
One of those children was born the same year Walker paid for the abortion.

The next year, 2010, Walker told radio host Howard Stern he had only slept with two women in his life.

Walker claims he is a devout Christian, and he often invokes his faith to justify his anti-abortion position, including on the campaign trail.
“To say that it is OK for a woman to kill her baby when [God] said ‘Thou shall not kill.’ And I said, you know, I can’t, I can’t square it,” Walker said at a conservative Christian values roundtable this August. “I can’t get around that.” 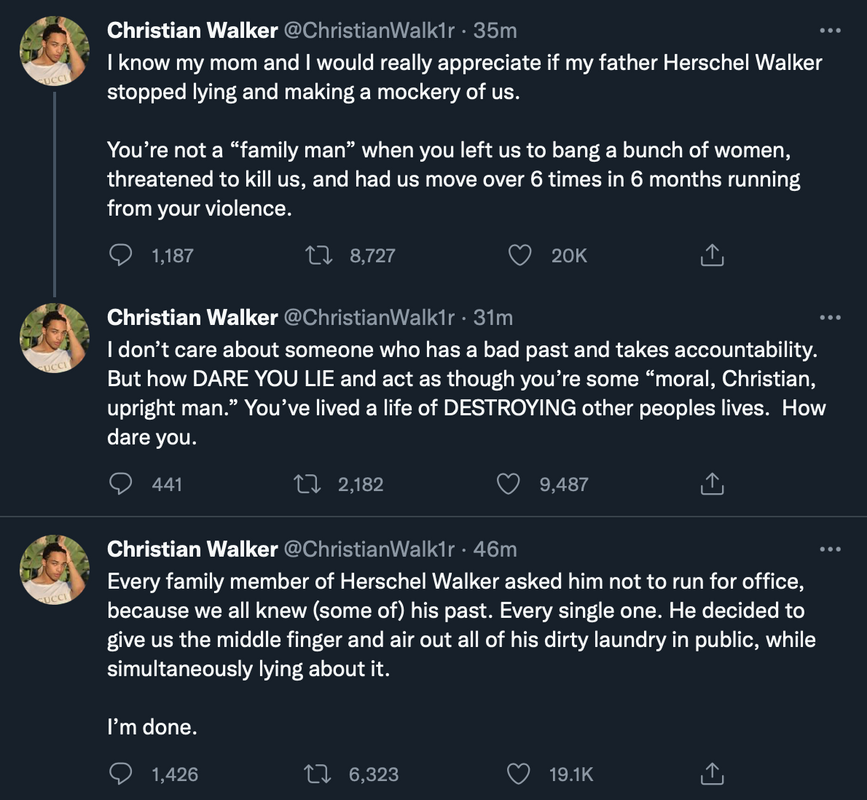 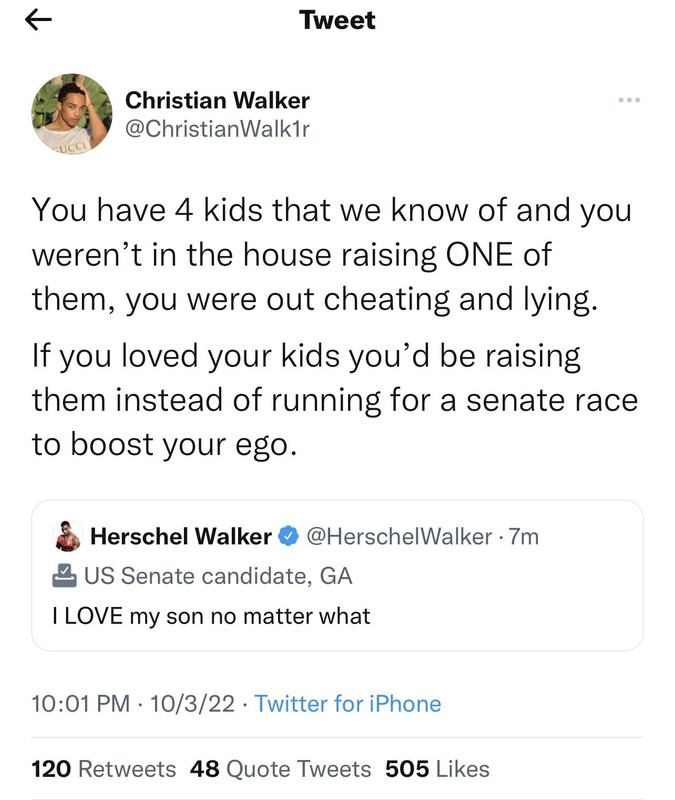 their god is donald trump has prolly paid for more abortions than anyone.

as long as herchel on that

that's all they care about
B

their god is donald trump has prolly paid for more abortions than anyone.

as long as herchel on that

what's this suppose to mean?

Asked if Walker ever expressed regret for the decision, the woman said Walker never had. Asked why she came forward, the woman pointed to Walker’s hardline anti-abortion position.

“I just can’t with the hypocrisy anymore,” she said. “We all deserve better.”
Click to expand...

I mean, who's actually surprised?

The only reason he has secret kids is because he couldn't convince his mistresses to abort.
℃

bruh, the same year he had a ANOTHER kid he tried to hide that he was having abortions

The picture makes him look like he's about to sing about the shyt.

republicans are hypocrites. they oppose welfare but most federal dependent states are red. they are against government over-reach but will gladly cheer on when women are subjugated

B
Has Herschel Walker finally discovered he’s being used by the GOP?
2 3 4