Giselle said:
Should also add a thumbs down, sad/cry and hug option for reactions.
Click to expand...

Agreed. Or something equivalent to a WTF/FOH. I always felt negs were too draconian in most cases but something in between to let people know you don’t fukk with their post would be nice.

My text editor features are disabled... why is that so

Cleaner, I got this.

still the format of the list of threads in each section is very ugly and confusing..I'm using dark theme on an Android .. seems to be better on landscape on a tablet though.. kinda wierd.. using same browser

anyway to customize top toolbar ? didn't have to do 2 clicks to get to "new posts" before..just would like

to redirect to "new posts"

also i should be mod and or admin lol

Go to menu then press “find threads”. And slide to the right

Give us an actual neg rep system and keep the angry face as a dap. Some articles make me angry, not the poster.

Peter Popoff said:
Give us an actual neg rep system and keep the angry face as a dap. Some articles make me angry, not the poster.
Click to expand...

You make a good point. Recently for me it's been the Herschel Walker videos

. I be wanting to

off the strength of his idiocy but that's not the poster's fault lol. Neutral reactions could help with that.

breakfuss said:
If by having each subforum listed in the dropdown is what you mean by "forum jumping" then yea, I agree that'd be nice. Or maybe just the main categories? I can't remember how it used to be. My bad if you're talking about something different lmao. Attached photo is what I think you're referring to.

yeah i meant this thing 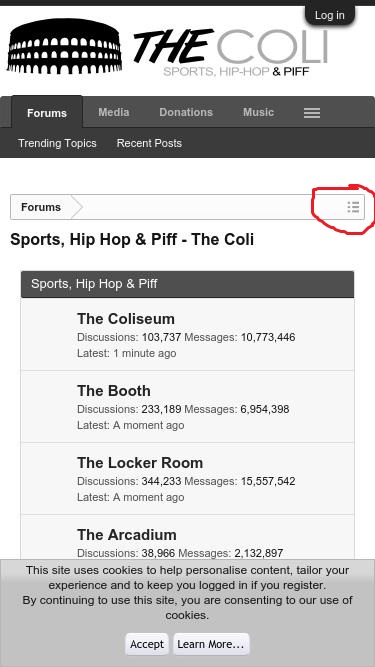 KidJSoul said:
My text editor features are disabled... why is that so
Click to expand...

@KidJSoul do you have some sort of javascript disabler running? what browser you using?
J

How do o i turn signatures and images off agajn?

bring the prince layout back

Need to add pics without the link, just upload.

On SB Nation sites that I use, like Celticsblog, they have a "Sarcasm" button right there in the reply box. I guess the closest thing here is the

They also have a "+ Gif" button which allows you to search for a gif and insert it without u having to do it another way. It's not always the best gifs but it does add to the convenience.

One thing that was annoying on the old site was someone posting a Reddit post that had a video in it, it would automatically play. shyt was infuriating, especially at 50 posts per page, trying to find where the video was and having to stop it or mute. It would be nice if now that video doesn't autoplay, or plays when you scroll to the actual post. Haven't confirmed how it is with the new upgrade though.
You must log in or register to reply here.