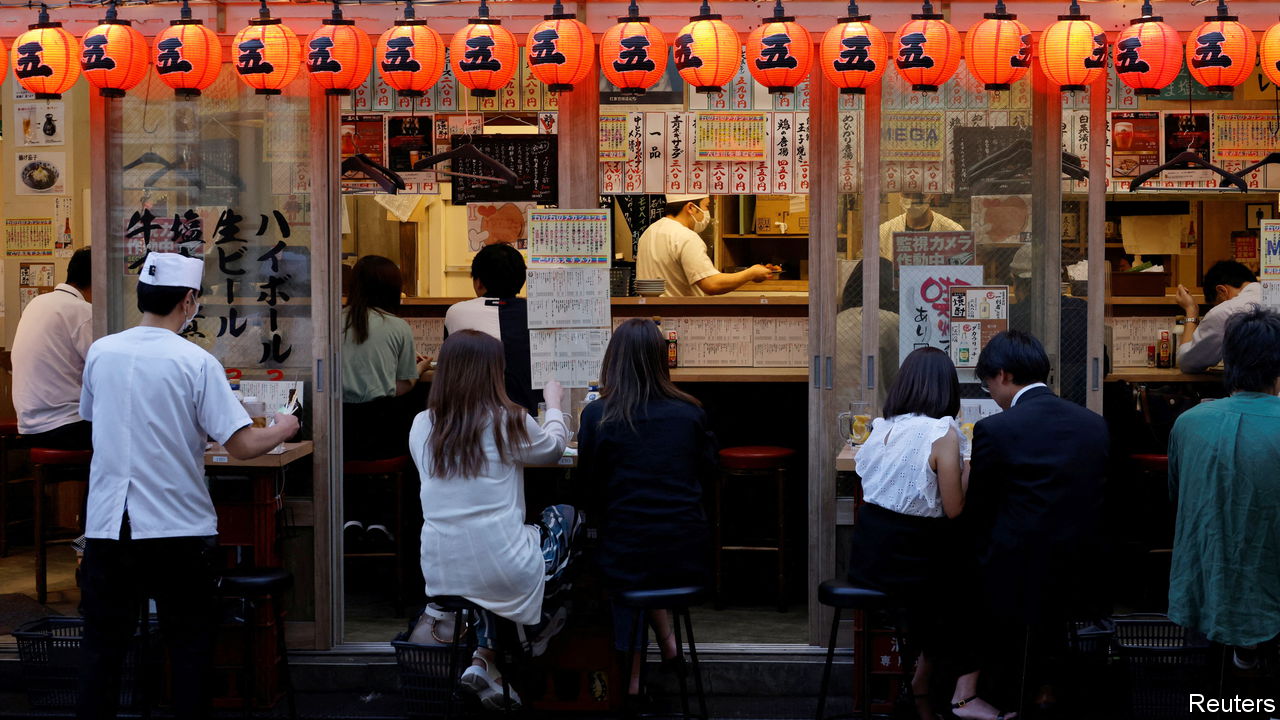 Of the 42 big economies featured in the indicators page of The Economist, eight still have inflation below 4%. Six of those eight are in East or South-East Asia (see chart). The region also includes some smaller oases of price stability, such as Vietnam (where inflation was 2.9% in the year to May) and Macau (1.1% in the year to April).

What accounts for this Eastern exceptionalism? Part of the explanation lies in the spread of two diseases. An outbreak of African swine fever from 2018 to 2021 devastated the pig population in China, where as many as 200m pigs were culled, according to some estimates. This dramatically increased the price of pork, a food staple in East Asia. The price has subsequently fallen back sharply. In mainland China, for example, the price of pork fell by more than 21% in the year to May. This helped offset inflationary pressures elsewhere in the economy. (It also helps that East Asia, unlike other parts of the world, eats more rice than wheat. The price of rice has risen by 8% since Russia’s invasion of Ukraine, whereas wheat prices have increased by 17%.)

The other anti-inflationary disease in the region is covid-19. Many parts of Asia turned to living with the virus more slowly and reluctantly than in the West. Indonesia, for example, did not entirely abandon quarantine for international arrivals until March 22nd. In Malaysia, travel and movement did not return to normal until early May, a full month after the country officially entered its “transition to endemic” phase, according to an index of social restrictions developed by Goldman Sachs, a bank. Taiwan remains cautious even now. Its success in keeping covid at bay in the past has left its population with little natural immunity and less of the West’s fatalism about the disease.

China, of course, continues to impose stringent restrictions on people’s movement and gathering wherever infections appear. The recent lockdowns in Shanghai and elsewhere hampered both the economy’s ability to supply goods and its consumers’ willingness to buy them. This twin disruption to supply and demand could in theory move prices either way. But the damage to consumer spending seems to be more severe and persistent. In May, the second month of Shanghai’s lockdown, retail sales fell by almost 10% (in real terms) compared with a year earlier, even as industrial production rose by 0.7%.

Limits on cross-border travel have been devastating to the economies of Hong Kong and especially Macau, which relies on visitors from the mainland to fill its casinos. Indeed, Macau’s gdp in the first three months of this year was less than half the size it reached in the same months of 2019. In that context, inflation of 1% does not seem so miraculous. Indeed, it is a wonder that prices are rising at all.

In the West, high inflation has forced many economic policymakers to turn hawkish. America’s Federal Reserve, for example, felt compelled to raise interest rates by 0.75 percentage points on June 15th, faster than planned. The Fed’s new haste to combat inflation is complicating East Asia’s fight against the same foe. Higher interest rates in America attract global capital flows, putting downward pressure on Asia’s currencies. Hong Kong, which has pegged its currency to the American dollar, and Macau, which has pegged its currency to Hong Kong’s, were obliged to raise interest rates the day after the Fed did so. Malaysia and Taiwan have also raised interest rates already this year and Indonesia, where interest rates are 3.5%, is forecast to increase them next month, according to JPMorgan Chase, a bank.

Malaysia and Indonesia have also experimented with a less orthodox response to rising prices: export bans. Indonesia briefly prohibited the overseas sale of palm oil and Malaysia retains an export ban on live chickens. The aim is to reserve all of the country’s supply for its own people. But the policies can backfire if lower prices prompt local farmers to cut back on production. Such bans also exacerbate inflation elsewhere in the region. Singapore, in particular, depends on poultry imports from its larger neighbour. The pair’s economic intimacy and rivalry is coming home to roost.

One exception to this tightening trend is Japan. At its meeting on June 17th, the Bank of Japan reiterated its commitment to buy as many ten-year government bonds as necessary to keep their yields to no more than 0.25%. It resolved to stick to this ceiling, even as the equivalent yields in America have risen sharply to over 3.2%. This yield gap has contributed to a plunging yen, which has fallen to around its weakest levels against the dollar since 1998.

A weak yen will push up import prices, contributing to inflation in Japan. If higher inflation persists, people will come to expect it, demanding more generous wages in compensation. Those higher wages will, in turn, push up prices, making the expectations of inflation self-fulfilling.

In many parts of Asia, such a wage-price spiral is something to be feared. But in Japan, it is something policymakers have long sought. After years of weak demand and falling prices, inflation expectations had become dangerously low, making it harder for the Bank of Japan to revive the economy in a downturn and forestall a return to deflation. Like everywhere else, Japan is getting a bite of inflation. Its central bankers want to sink their teeth in even deeper. ■7
You must log in or register to reply here.