3 straight 180 yard games from an unstoppable force versus a KC offense with 'flash' that can score at the speed of light.

I just think this is Andy's year. Everything has broken right for the Chiefs. Mahomes miraculously coming back from that knee injury, Fitzmagic giving them the bye, Titans giving them HFA throughout the AFC playoffs, it's now or never.

Chiefs win by a TD

really a dope clash & contrast when you look at it

Titans family we really in the afc title game

I ain't scared of no Andy Reid coached team

Mahomes is a gawd level talent, you cant hope to contain the breh

Been hearing these same kind of predictions the last 2 weeks. Keep it coming.

BaggerofTea said:
The titans will HAVE to score 30+ to keep up with this team

Mahomes is a gawd level talent, you cant hope to contain the breh
Click to expand...

They said the same with a historical Bal offense. Granted, Mahommes is light years ahead of Lamar as a passer. Yall really sleep on our DB's tho. It's a reason why Brady/Lamar couldnt get off aside from perceived talent gap. We got niccas that can lock down one on one or safeties who play the zone perfectly or who can lock up them damn selves or even play linebacker roles to keep ya mobile QBs in check. We too versatile.

Trav said:
Been hearing these same kind of predictions the last 2 weeks. Keep it coming.

Chiefs are not the Pats or the Ravens. That offense does not take games off. I want the titans to win, but I just don’t see them slowing the chiefs down enough to keep it close

Chiefs go up early can they stay to the running attack ?

I might amend this later... but while Kansas City SHOULD win by two scores, my knee-jerk pick is Tennessee.

The Titans match up favorably with Kansas City thanks to a ball-control offense that can keep the Chiefs off the field. Derrick Henry looks unstoppable and you know he's in line for at least 30 cracks at it (barring a fast start from KC, which isn't out of the realm). Not to mention, the Titans have beaten KC already this year. The Chiefs are a different squad now, but it's something for the Titans to draw confidence from regardless.

From The Eastside with Love

Trav said:
Been hearing these same kind of predictions the last 2 weeks. Keep it coming.

Like I said yesterday, Henry had a monster game the first time and it still came down to this drive from Tannehill 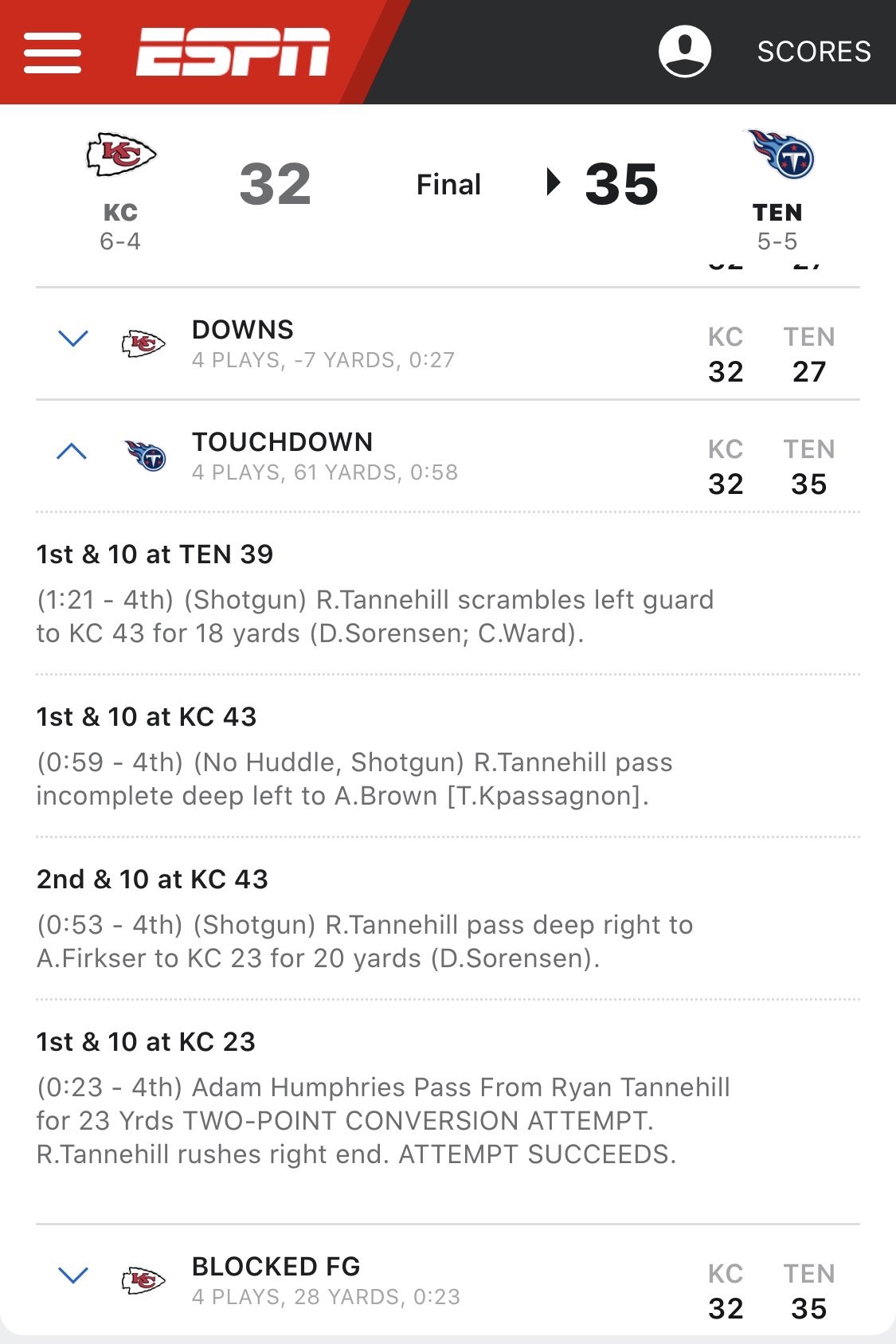 It’s not a lock either way but I would say the defense is gonna have to make plays against imo a better offense than Baltimore.

Can’t wait for the game either way