ARTICLE ABOUT THE PUNK ROCK SCENE IN AFRICA....KENYA

JESUS is the Standard

Pretty dope about the punk rock scene IN KENYA.

In the late 1970s punk heyday other black bands also played an important role in the explosive growth of the genre with groups such as Pure Hell, formed in Philadelphia in 1974, and X-Ray Spex, formed in London in 1976 by the Somali-British punk pioneer Poly Styrene.
As part of their efforts to challenge the image of punk rock music as a genre dominated by white, male bands, Crystal Axis was meant to play at the Decolonise Fest in the UK last month.


The raging lyrics shine a light on a harrowing aspect of Kenyan oppression and are an indictment of an era when there was no freedom of expression in the East African nation.
Nyayo House is a high-rise government building in central Nairobi infamous for its torture chambers used for opponents of Moi, who was in power from 1978 to 2002.

"We are dissidents… Nyayo is sickening," scream the lyrics of the song, which AB says is about "generational trauma" and the need for Kenyans to speak about this history.
In August Crystal Axis released their latest EP, Black AF, a celebration of contemporary African identities.
It draws on their own experiences as young black Africans who contend with various challenges such as corruption, but is also a celebration of their strength, talent and creativity. 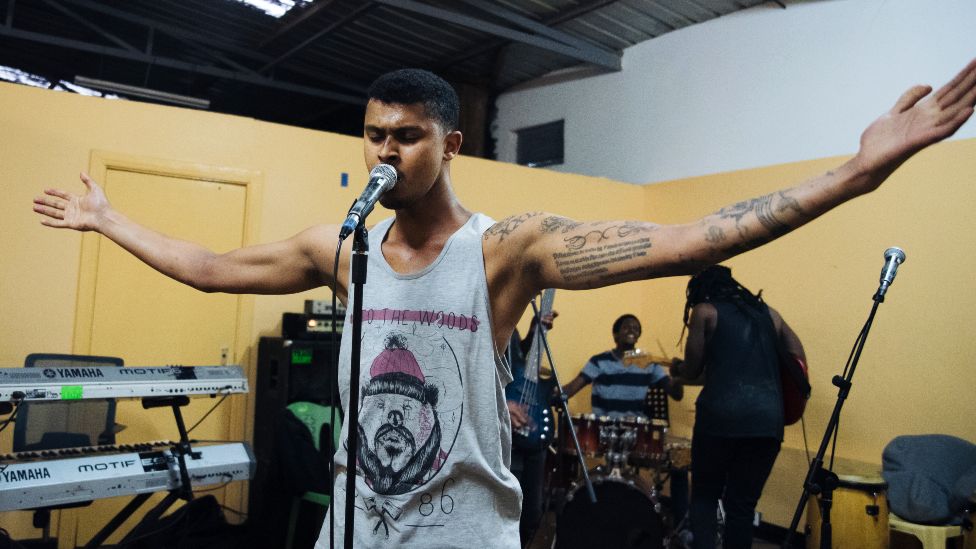 IMAGE SOURCE,MOHAMED ABDULRAHMAN
Image caption,
The lyrics AB belts out are highly political
The band also wants to use the power of punk rock music to create a space for young Kenyans to make this music on their own terms.
Another aspiration is to reclaim punk rock history, which they say has been "whitewashed" and the contribution of black punk artists often forgotten.
Aroni gives the example of black pioneers like Death, a proto punk band founded in Detroit in 1971, which tends not to be credited for its development of the early punk sound.

The youth got something to say