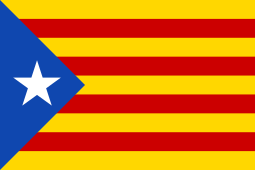 Catalan leader declares independence but puts it on
The leader of Catalonia postponed a formal declaration of independence from Spain on Tuesday, stepping back from the brink of a constitutional crisis that has engulfed one of Europe's richest nations. 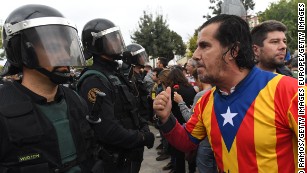 Catalonia's independence standoff: How we got here and what comes next
Carles Puigdemont, the Catalan President, declared that the region had "earned the right" to independence from Madrid. But he told the Catalan Parliament in Barcelona that he wanted to take the heat out of the political standoff that has roiled Spain since a disputed referendum on October 1.
"With the result of the referendum on the first of October, Catalonia has earned the right to be an independent state. It has earned the right to be heard and respected," Puigdemont told delegates.


"I defend the mandate of the people of Catalonia to become an independent republic," he said, to applause from the chamber.
But he added that parliament should suspend a formal declaration in order to pursue dialogue. He did not specify what form the talks would take, nor who would mediate them. 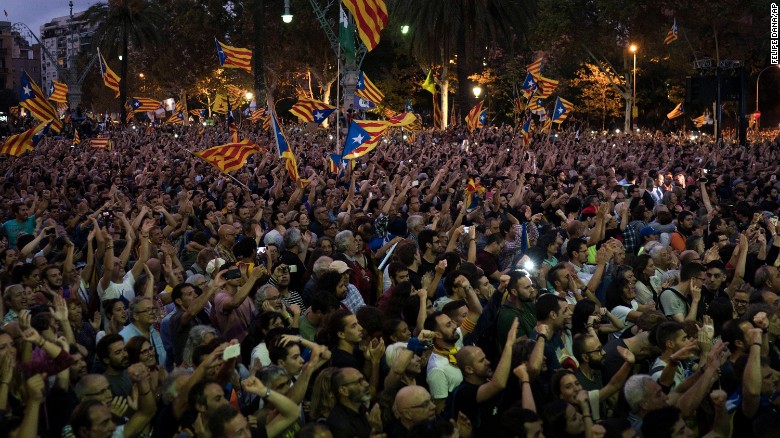 Pro-independence supporters watch Catalan President Carles Puigdemont's speech on a big screen in Barcelona.
Spanish Prime Minister Mariano Rajoy has previously refused to hold talks unless Puigdemont drops his independence claim. The October 1 referendum was declared illegal by Spain's top court.
Earlier the parliamentary session was delayed for just over an hour, amid reports that last-minute attempts at international mediation were underway.
Puigdemont said Catalonia was living through a "historic moment" that would have repercussions throughout Europe. "The consequences and effects go well beyond our country," he said.
He defended the right of Catalans to express their views. "We are not criminals," he said. "We are not crazy. We are not making a coup d'état ... We are normal people who wish to have a vote." 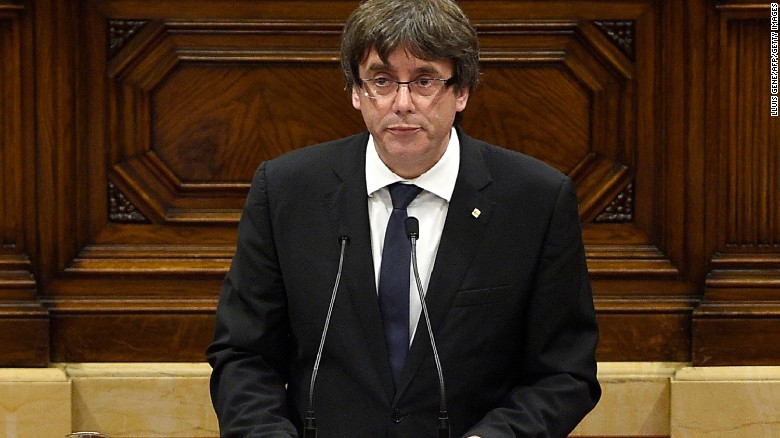 Catalan Ppresident Carles Puigdemont speaks at the Catalan Parliament in Barcelona.
Madrid and the European Union had earlier implored Puigdemont not make a unilateral declaration of independence. The Spanish government had warned Puigdemont not to take any "irreversible" action.
After the speech, the head of the Catalan branch of the anti-independence Ciutadans party, Ines Arrimadas, accused Puigdemont of dividing the region. "The people of Catalonia are not united, thanks to you," she said, alluding to Puigdemont's claim that the region was united behind the idea of independence.
"Most Catalans believe that Catalonia is their land, Spain is their country and Europe their future," Arrimadas said after Puigdemont stopped short of a full declaration of independence Tuesday.

Spain was plunged into political uncertainty when a divisive and controversial referendum on October 1 found that 90% of Catalan voters in favor of independence. But the result was not as decisive it appeared -- turnout was only 43% and many Catalans stayed at home.
Spain's Constitutional Court declared the referendum illegal and Spanish police tried to shut the vote down by firing rubber bullets and pulling voters from polling booths in scenes that shocked many across Europe.

Believe in myself and the Coles and Kendricks

I don't give a single fukk

Be black and make a thread on racist espana brehs

I'd be very surprised if it went thru.

Glock Got a Private Part

Majestic said:
I don't give a single fukk

Be black and make a thread on racist espana brehs

Then get tf out

i'll move this thread to higher learning instead

Spain would have made shyt very uncomfortable for Catalonia. The Catalans don't want those problems.

This is ALL bad.

Barcelona alone bring so much money to Spain. Spain don't want that independence going through.

Wouldn't be great for either in short term but in long term both will be fine.

Formerly known as... said:
Barcelona alone bring so much money to Spain. Spain don't want that independence going through.

Wouldn't be great for either in short term but in long term both will be fine.
Click to expand...

It would actually be really great for Catalonia in the long run. They have resource rich lands and Barcelona probably attracts more tourism than anywhere else in spain. The people there feel like they're being taken advantage of by the country and treated like second class citizens. I hope they get it

Catalan President bytched out. He still trying to have talks with Madrid when he already knows they have a hardline attitude towards a Catalan succession. Once the EU said they wouldn't acknowledge Catalan and various Catalan businesses moved outside the region, he got scared.

One w/ The Force