Menu
Log in
Register
Install the app
You are using an out of date browser. It may not display this or other websites correctly.
You should upgrade or use an alternative browser.

Dad leaps to his death as family films him jumping off cliff in Spain: video

A father vacationing with his family in Spain leaped to his death in a cliff-jumping stunt gone wrong, shocking video shows.

The harrowing footage captured from a nearby boat — where the man’s wife and son were filming — shows the 31-year-old Dutch tourist readying to make the 100-foot plunge Thursday in the Malgrats Islands.

The ill-fated daredevil took the plunge off the majestic cliff, but seemingly realized his leap wasn’t going to clear the sharp, jagged rocks below that he viciously clipped before crashing into the water while letting out a terrifying scream.

“Oh my God!” the man’s wife shouted as the short, chilling clip ends.

The body of the man, who wasn’t immediately identified, was reportedly found in the water following a search. It’s unclear if local authorities are investigating the deadly cliff-jumping stunt, which is popular among vacationers throughout Majorca.

How the hell did he think he was gonna clear that?!?!?!

This pandemic has led to so much mental health issues ...

This pandemic has led to so much mental health issues ...
Click to expand... 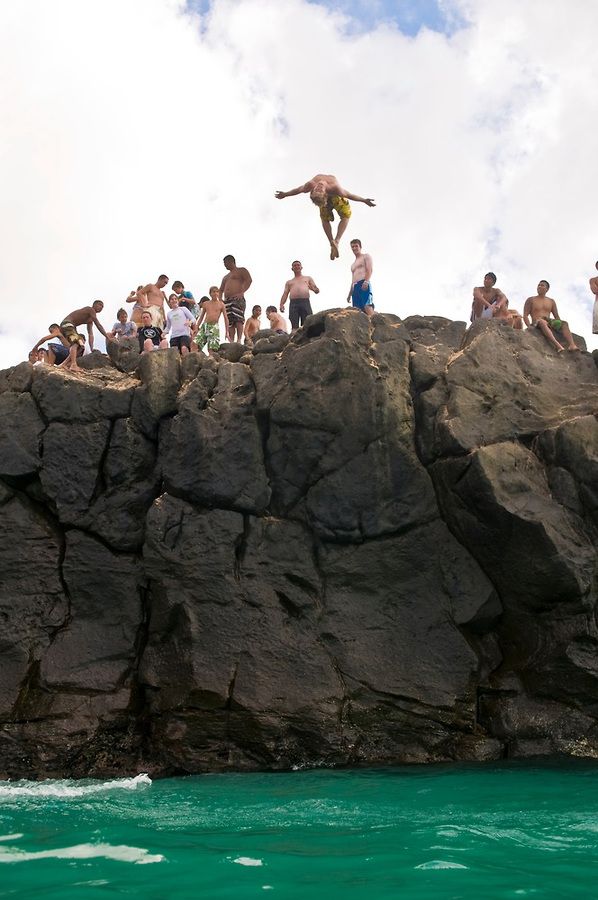 I did this 25’ jump from Waimea Bay on the North Shore of Oahu.(not me pictured lol) The jump lands in the ocean, you just need to time when the wave is at it highest so you don’t hit the bottom. I did like two jumps to say I did it and had enough. There was a line of people doing this jump, no injuries the whole day I was there.


This guy was crazy. It doesn’t sound like this was a designated jump spot
Last edited: May 13, 2022

Them was a lot of rocks to clear.

Damn fool. You have a wife and kids. You don't need that daredevil shyt.

JLova said:
Damn fool. You have a wife and kids. You don't need that daredevil shyt.
Click to expand...

he did it for the adrenaline rush

And everything you're touching, falls apart.

This pandemic has led to so much mental health issues ...
Click to expand...

I realize when seeing these videos that too many people lack physics?, not sure if that's the proper word, but they lack the ability to visualize a possible trajectory or similar mechanics. That jump alone required him hitting it right at the edge and then performing a triple jump to clear it sufficiently, and that's assuming he doesn't dive so deep into the water to meet any sharp rocks down there.
L

I love you, you know.

Still haven’t played this. shyt lit?
PS4 had too many classics.
You must log in or register to reply here.

keyboardist Bernard Wright has passed (sampled on Snoop's G's and Hustlas, LL's Who do you love and..."
3 4 5

Miami is a NO FLY ZONE for Sweet Micky

Viola Davis says director called her by his maid’s name: ‘I knew him for 10 years’
2 3

B
US airlines like Delta and United are so desperate for pilots they are dropping some requirements and considering cutting training hours to get more..
4 5 6