Robert Smalls was born to Lydia Polite, an enslaved woman, in 1839. He started working in outside labor from the age of 12 but could only keep a dollar a week and had to give the rest to the damn master. He sought out work on the docks cause he loved the sea, and eventually worked his way onto ships and learned to pilot. At the age of 17 Robert met an enslaved maid and they had two kids together. He was working to save up money to buy their freedom when the War broke out.

This where it start getting good.

Smalls got assigned to steer a military transport called the CSS Planter. He got the confidence of the crew and owners....while he plotted his escape.

Robert told all the other slaves about his plan except for one, cause

Their ship went on a run to pick up some heavy guns and a bunch of ammo. When the ship docked up in Charleston the three white officers disembarked and left Smalls in charge.

At 3am, Smalls put on the captain’s uniform and hat and sailed that damn ship out of the harbor.

along with the families of the other crewmen. They had to make it past five Confederate forts, which Smalls nailed by posing as the White captain in the dark and giving all the correct Confederate signals as they passed. An alarm was raised when the ship shot out past the Confederate lines but by that time they were already out of range of the guns.

Smalls steered that damn ship right up to the Union’s naval blockade, pulling down the rebel flags and replacing them with a white bedsheet. As one union soldier related regarding sighting the ship:

Just as No. 3 port gun was being elevated, someone cried out, ‘I see something that looks like a white flag’; and true enough there was something flying on the steamer that would have been white by application of soap and water. As she neared us, we looked in vain for the face of a white man. When they discovered that we would not fire on them, there was a rush of contrabands out on her deck, some dancing, some singing, whistling, jumping; and others stood looking towards Fort Sumter, and muttering all sorts of maledictions against it, and ‘de heart of de Souf,’ generally. As the steamer came near, and under the stern of the Onward, one of the Colored men stepped forward, and taking off his hat, shouted, ‘Good morning, sir! I’ve brought you some of the old United States guns, sir!'"
Click to expand...

Smalls turned the ship and cargo over to the U.S. Navy, including the captain’s code book that had all the Confederate signals in it and a map of mines and torpedoes in Charleston Harbor.

The Union Officer sent Smalls to Commodore Du Pont and Smalls was able to give Du Pont detailed information about Charleston’s defenses. That allowed the U.S. Navy to capture Coles Island without a fight, and it became their base of operations in the area for the rest of the war. Commodore Du Pont wrote to the Secretary of the Navy,

“Robert, the intelligent slave and pilot of the boat, who performed this bold feet so skillfully, informed me of [the capture of the Sumter gun], presuming it would be a matter of interest. He is superior to any who have come into our lines — intelligent as many of them have been.”
Click to expand...

Smalls was just 22 years old when this went down.

The Confederates put a $100,000 bounty on his head, and spread rumors that White people had boarded the ship and helped him pull it off because they were unable to deal with the fact that a young Black man had done this on his own.

and he was lauded as a hero across the North. He began to use his detailed knowledge to assist the U.S. Navy, then went to Washington D.C. to lobby Abraham Lincoln to allow black men to fight for the union. His lobby worked, and Secretary of War Stanton signed the order permitting the first Black men to enlist.

This whole time the Confederates were shamed as hell because a Black man had pulled off a huge coup right under their noses. The three white officers on the ship were court-martialed.

Smalls joined the Union and saw service in 17 major battles and engagements. He piloted the Crusader, the reclaimed Planter which had been adopted into service for the Union, the ironclad Keokuk, and the USS Isaac Smith.

At one point while piloting the Planter, the Confederate batteries opened up and the Planter’s White captain got scared and fled to the bottom of the ship.

Smalls knew what would happen to him and the other Black men if they surrendered to the Confederates, so he took command and piloted the boat to safety.

For that he was promoted to Captain and made acting captain of the Planter, causing him to be one of the highest-paid Black officers of the Civil War.

Smalls was present for Sherman’s march to the sea and the raising of the American flag at Fort Sumter where it had all began, observing the Confederate defeat in first person.

After the war Smalls used his ship for humanitarian missions to deliver food and supplies to freedmen.

While all that war shyt was going on, Smalls managed to find time to act as a delegate to the 1864 RNC Convention in Baltimore, raise money for the education and skills development of ex-slaves in Philadelphia, and taught himself to read and write. While in Philly he was ordered off of his streetcar seat for the sake of a white passenger,

and rather than standing up he left the streetcar in protest. His example as a war hero helped set an example that led to a bill integrating Philly’s public transport in 1867.

After the war Smalls returned to South Carolina like a boss and bought his master’s house from the Union officials who had seized it.

The old slaveowner tried to sue him for it later, but Smalls won in court, establishing a precedent for many other cases. He took care of his mama in that house for the rest of her life.

In South Carolina Smalls established a school for African-American kids and a business to serve freedmen's needs. He and other investors established a horse-drawn local railway line with all-Black ownership and management outside of one token White guy. He also owned and published a Black newspaper.

Smalls worked heavy in politics for the Republican Party, helping pass a bill leading to free public schooling for all South Carolina children. In 1868 he ran for the South Carolina House of Representatives and won, a former slave representing the people in the halls of government. There he helped to pass the Civil Rights bill and the Homestead Act, then moved up to the South Carolina Senate. During this time Smalls also served as an officer in the South Carolina state militia, eventually rising to the rank of Major General.

Nah, but that wasn’t enough for this man. In 1874 Smalls won election to the U.S. House of Representatives.

Smalls shot big in Congress, fighting for equality in the U.S. military, racial integration, and against the moving of federal troops out of the South. Unfortunately, he was unsuccessful.

In 1877 the federal troops left South Carolina and racist White Democrats employed the KKK to violently wrest back control of the state. Smalls proved their most formidable opponent in government, losing in 1880 due to voter intimidation but contesting the election results at the federal level to win a third term in Congress. Smalls proceeded to win two more terms in the mid-1880s and became the 2nd-longest serving Black member of Congress until the 1950s.

By 1890 it became impossible for a Black man to get elected in the South, so President Benjamin Harris appointed Smalls to a position as Collector for the Port of Beaufort, a position he would retain for twenty years. He remained active in Republican politics, fighting against efforts to defranchise Black people but losing that battle to racist White Democrats.

Smalls had to fight to get his due his whole life. He found that according to official records he had never been commissioned in the Army (though he argued that he had been commissioned), so he could not receive his veteran’s pension. A federal bill was supposed to grant him a pension in 1883, but it was halted by racists. It eventually took an Act of Congress in 1897 to get Smalls his pension. During that same debate in 1883 it was revealed that Smalls had been cheated on the bounty for bringing in the Confederate ship. In 1900 another Act of Congress pushed his reward up to $5,000, which would be closer to $150,000 today.

Smalls remained influential locally, and even at the late age of 74 in 1913 he was able to use his influence to prevent a mob from lynching two Black men. He died at the age of 75, with a tombstone engraved with

"My race needs no special defense, for the past history of them in this country proves them to be the equal of any people anywhere. All they need is an equal chance in the battle of life."

Here's a picture of the man at a young age: 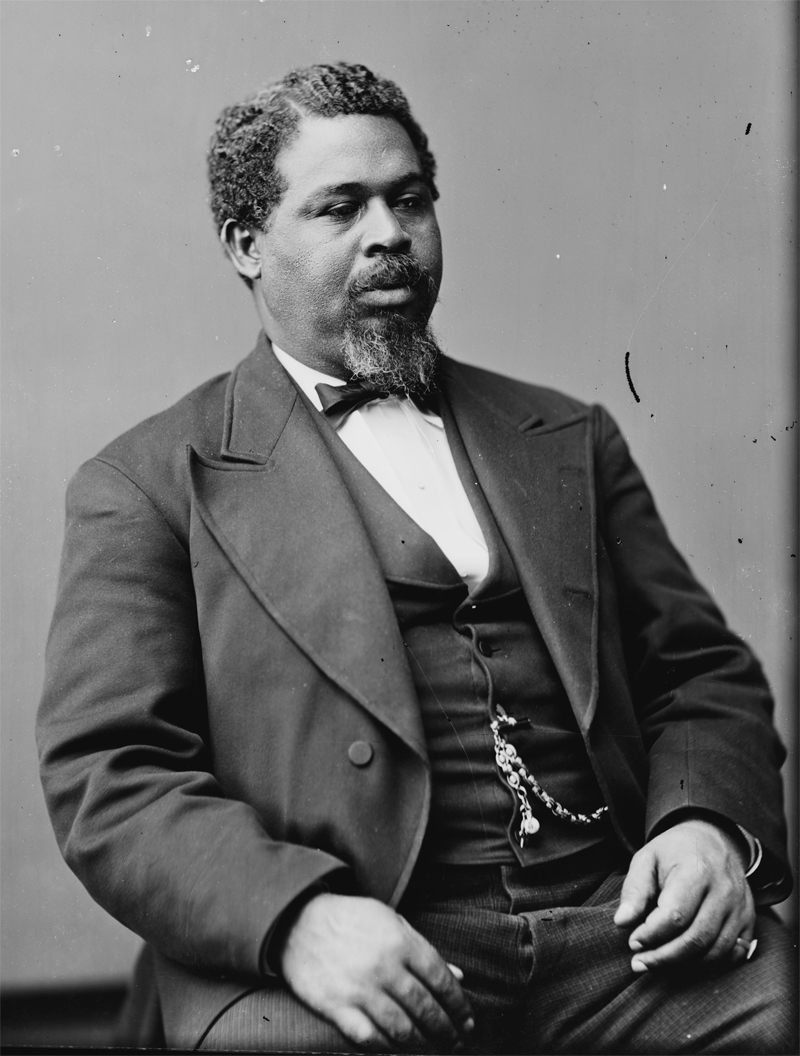 Here's a more detailed tale of how he stole the Confederate ship:

Having read about him before, I knew this thread would be good just off the strength of the title. Spent his entire life hitting white folks with the

Having read about him before, I knew this thread would be good just off the strength of the title. Spent his entire life hitting white folks with the

The combination of his aptitude and his boldness is something to be admired.

Also, he didn't spend all of his time just fighting military/political battles. He did a lot to build up the community from the inside too. Just an all-around impressive character.
J

found about him because I live near Beaufort and a portion of South Carolina Highway 170 through Beaufort is the "Robert Smalls Parkway" (he also has a school in Beaufort named after him) and my curiosity led me to look him up, my man was swaggin on em big time

Nothing small about his accomplishments

tru_m.a.c said:
Nothing small about his accomplishments

@Rhakim I made a similar thread days ago...we need that movie We need the "Robert Smalls" movie

Reppin
Deep in your anus...

a bawse
You must log in or register to reply here.