Umbrella Academy, Doom Patrol, and the X-Men are similar for a good reason

Umbrella Academy, Doom Patrol, and the X-Men are similar for a good reason
Gerard Way, mutants, and Grant Morrison 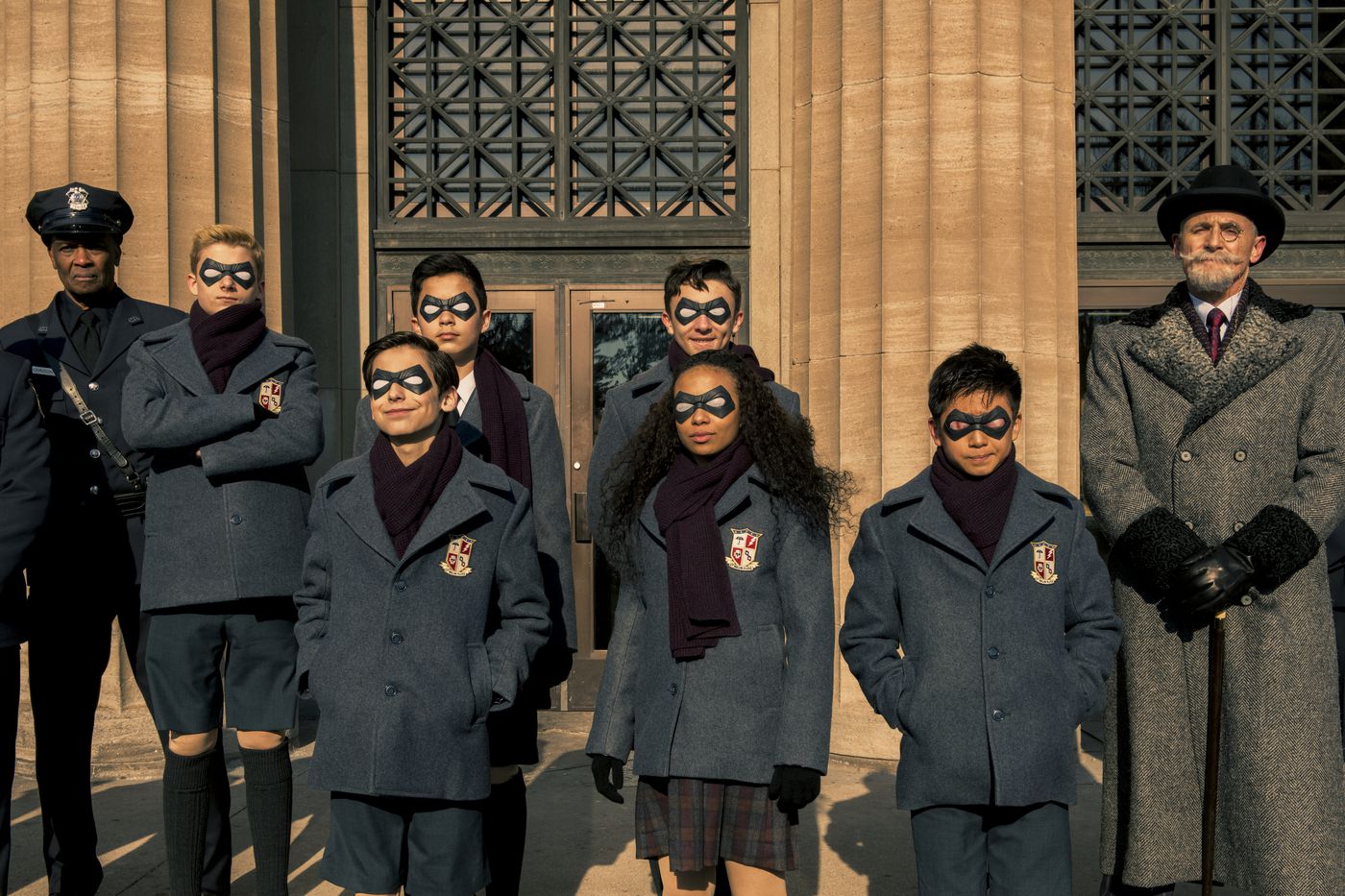 I know what you’re thinking. “Isn’t that just the plot of the X-Men? The leader of the Doom Patrol even uses a wheelchair, just like Professor X! Umbrella Academy and Doom Patrolare both ripping off the X-Men!”

Confusion around the superficial similarity between the Doom Patrol and the X-Men has swirled since 1963, the year that both superteams debuted on the comics page. And one might easily assume that, as the more popular of the two, the X-Men are the injured party. But don’t get it twisted: Doom Patrol showed up first.

If anything, the X-Men could be a ripoff of Doom Patrol
Perhaps I should explain who the Doom Patrol are. They are a DC Comics team of tragic superheroes, each given a strange power in a terrible accident that has left them estranged and ostracized from human society. The most consistent member is Cliff Steele, a.k.a. Robotman, a man whose body was so destroyed in a car crash, he exists only as a brain in an unfeeling robotic body. 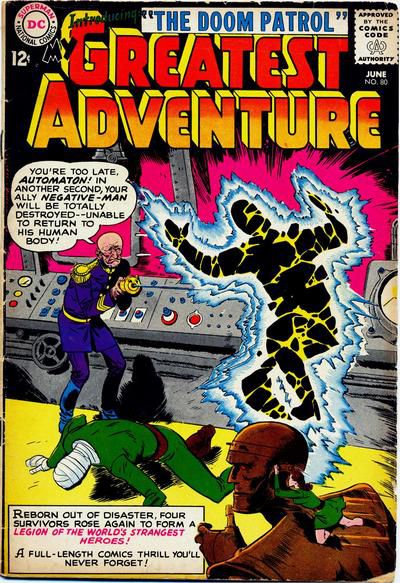 The cover of My Greatest Adventure #80, the debut of the Doom Patrol.

Arnold Drake, Bruno Premiani/DC Comics
DC Universe’s version also picks up several other characters from Doom Patrol history, namely Negative Man, an air force pilot whose being was merged with a negative space entity; Elasti-Girl (no relation to the Incredibles character), who initially cannot control the elasticity of her body; and Crazy Jane, whose 64 distinct personalities each has a different superpower. The leader and creator of the Doom Patrol is the wheelchair-using academic Dr. Niles Caulder, and together, they attempt to do the same sort of thing that other superteams do: Do good and save lives.


Co-created by writers Arnold Drake and Bob Haney with artist Bruno Premiani, the Doom Patrol debuted in the spring of 1963, a watershed moment in American comics. The early ’60s were defined by the rocketing rise of Stan Lee and Jack Kirby’s partnership at Marvel Comics. The key insight behind the Fantastic Four and many other hit Marvel Comics was the realization that the audience could be interested in more than heroes who always did the right thing without having to think about it. In fact, the audience might get moreexcited about heroes who struggled in their non-costumed lives.

And at the same time that Doom Patrol responded to that trend, Lee and Kirby were looking to outdo themselves once again. Just a few months after the first appearance of the Doom Patrol, Marvel published The X-Men #1 (later to be renamedUncanny X-Men), a comic about ostracized superheroes, some of whose powers were tragically uncontrollable until they got help from their own wheelchair-using academic leader, Professor Xavier.

But did the X-Men really rip off Doom Patrol?
Doom Patrol and X-Men seem to be just one of those cases of convergent comics evolution, not an outright rip off.

Arnold Drake did lob some accusations Lee’s way, however. In 2007, he told Newsarama that, over time, he’d become “more and more convinced that [Stan Lee] knowingly stole The X-Men from The Doom Patrol:

I didn’t believe so in the beginning because the lead time was so short [...] Over the years I learned that an awful lot of writers and artists were working surreptitiously between [Marvel and DC]. Therefore from when I first brought the idea into [DC editor] Murray Boltinoff’s office, it would’ve been easy for someone to walk over and hear that this guy Drake is working on a story about a bunch of reluctant superheroes who are led by a man in a wheelchair. So over the years I began to feel that Stan had more lead time than I realized. He may well have had four, five or even six months.
But in the same year, he also gave Michael Browning of Back Issues!magazine a much more relaxed take. “Since [Lee and I] were working in the same vineyards, and if you do enough of that stuff, sooner or later, you will kind of look like you are imitating each other,” Drake said.

Since their inception, X-Men and Doom Patrol have only diverged
Both books were successful for a time, but petered out by the end of the decade. Doom Patrol was cancelled in 1968, and in 1970, Uncanny X-Menswitched to running reprints of old stories instead of publishing new ones. Basically — it was cancelled too.


Both books wouldn’t return until the late 1970s, with the X-Men rising to true popularity for the first time under the pen of writer Chris Claremont and his collaborators. Inspired by that popularity, writer Paul Kupperberg attempted to revive Doom Patrol in 1977, but the book didn’t make it past three issues. He tried again in 1987, making it to 18 issues before the book was floundering again.

“[I was] missing the point of the Doom Patrol,” Kupperberg told Back Issues! magazine in 2007. “The original group were outsiders and freaks, while my new guys were just comic-book superheroes. I was young and inexperienced and new to writing, with about two years under my belt before getting the gig.”

With Doom Patrol #19, a young writer with big ideas took over; you might have heard of him. Grant Morrison took the mandate of the “weird” team to an extreme that few other superhero concepts have matched without slipping into pure parody. 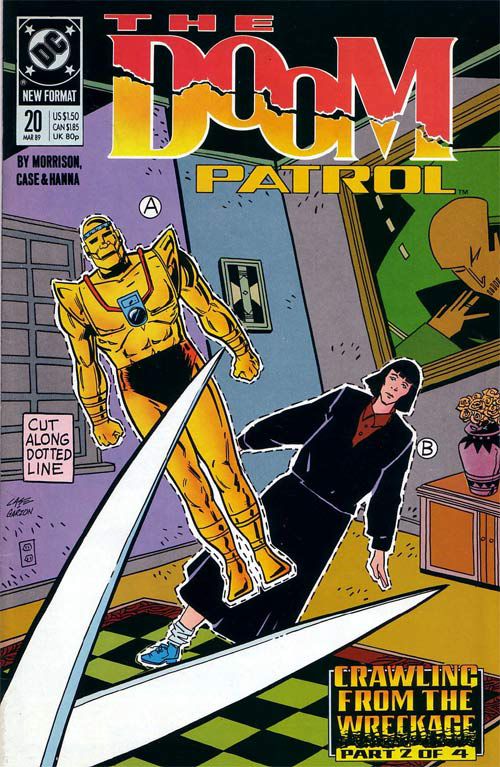 The cover of Grant Morrison’s second issue ofDoom Patrol, featuring the hand of a Scissorman.

Richard Case, Carlos Garzón/DC Comics
Under Morrison, Doom Patrol became a fully surrealist comic, but never lost control of its characters. As Robotman, Negative Man, and Crazy Jane struggled with the real emotional scars of their origin stories, they battled villains like the Scissormen, who spoke in cut-up poetry and could “cut” people out of reality, and the Brotherhood of Dada, a retooled incarnation of their old foes, the Brotherhood of Evil, led by the villainous Mr. Nobody. They befriended folks like Danny the Street, a sentient location, and Dorothy Spinner, a little girl with the face of an ape and imaginary friends capable of affecting reality

Morrison’s Doom Patrol is now considered the quintessential Doom Patrol — and is clearly a main influence on the tone of the DC Universe Doom Patrol show. But that’s not the only thing it’s a big influence on.

The Umbrella Academy creator Gerard Way is a huge Doom Patrol fan
Writer (and My Chemical Romance frontman) Gerard Way was clearly influenced by a lot of things when creating The Umbrella Academy: the X-Men; boys’ adventure stories like Johnny Quest; the work of H.P. Lovecraft and the genre of cosmic horror that it spawned. But nothing so much as Grant Morrison’s Doom Patrol.

“When I was in high school, working in a comic shop, I discovered [Morrison’s] work on the Doom Patrol,” Way told the New York Times in 2007, a month after the first issue of The Umbrella Academy hit stands. “I realized there was this other way of telling superhero comics, almost anti-superhero comics.”

The conceptual superpowers of Sir Reginald Hargreeves’ foster children — a girl whose lies can alter reality, a man whose head was transplanted onto the body of a gorilla, a 10-year-old boy lost in the future for 60 years — were Way’s attempt to come up with characters equally strange and “nontraditional” as Morrison’s.

In 2016, Way even took the reins on DC’s own Doom Patrol title, bringing back Robotman, Negative Man, Crazy Jane, Danny the Street, and more.

So if you’re wondering why The Umbrella Academy and Doom Patrolseem so similar, there’s a very good reason: Gerard Way is a giant Doom Patrol fan. And if somebody around you observes that Doom Patrol is a lot like the X-Men, you can tell them it’s more likely that the X-Men are actually like Doom Patrol. Just don’t say “well, actually” while you’re doing it; trust me.