Being April 25th, the anniversary of the KANG's passing lettuce take a look back at how surprisingly connected MJ was to video games, specifically SEGA, company who is credited for making the greatest console of all time, the dreamcast of course.

him away. So luckily Sega always did what Nintendont and hopped aboard the project...which we all came to know and love as MOONWALKER

Next would be both a great and sad moment, the heavily rumored involvement in SONIC 3, one of MJ's favorite video game characters.

"The story goes that Jackson was so enamored with the Sonic games that, upon hearing work was underway on a third installment, he called up Sega and invited himself over. While touring the facility, a developer working on the new game asked if Jackson wanted to contribute music for the soundtrack. Brad Buxer, who has a songwriter credit on Sonic 3 and was working with Jackson on music of his own, confirmed to HuffPo that they collaborated. “I was working with Michael on the Dangerous album,” Buxer said, “and he told me he was going to be doing the Sonic the Hedgehog soundtrack for Sonic 3. He asked me if I would help him with it.” 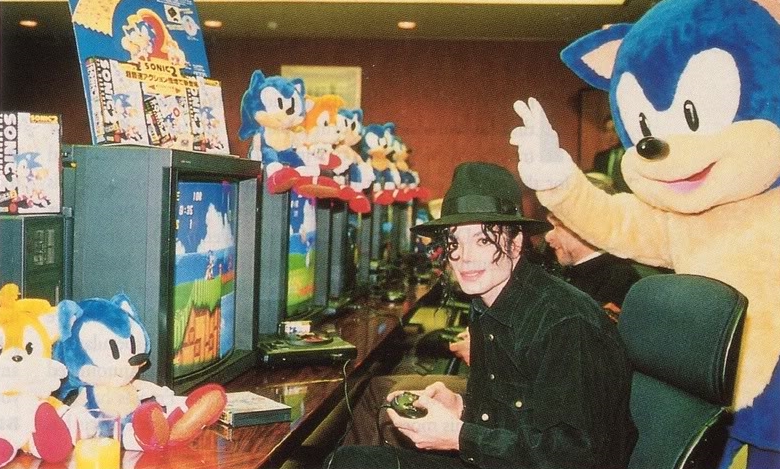 According to Buxer, some 41 tracks were recorded. “We did use a lot of samples made from [Jackson’s] beatboxing,” added Buxer. “We would chop this up and use it in cues. Of course there were Michael ‘he-he’s’ and other signature Michaelisms.” However, because Jackson chose to record in “high-profile” studio quality, much of the music was squashed down thanks to the compression necessary to fit it on a 16-bit game. Because of this, Jackson was dissatisfied with the final quality of the sound. “Michael wanted his name taken off the credits if they couldn’t get it to sound better,”

He would also cameo in the Dreamcast lead multiplat title READY 2 Rumble Boxing sequel who according to sources REFUSED to be financially compensated for his work, only wanting to be in the game.

MJ was a beast on this game

Lettuce use today to remember not only the King of Pop's music, but contribution to the gaming world

A lot of people still dont know about this....

maybe was some of the reason for sega's greatest later on.

Proud practitioner of the "High Science"

Mike and Mark Cerny, the architect of the PS4, when he use to work at Sega. Kingshango said:
Mike and Mark Cerny, the architect of the PS4, when he use to work at Sega.

You see how Mike wasn't feeling that nikka

Peep the screen too, nikka won 2 rounds straight, didn't even lose a match

Yo that's the crazy part, Micheal of all people winning 2 straight rounds on one of the hardest Tekken iterations. Man, I wonder if there's footage somewhere stored in a vault of Micheal playing Tekken, that shyt would be amusing to see.

Reppin
Who all over there?

That's why Sonic 3 music was so fukkin good
W

I remember playing this in the arcades.

MJ was the King of greatness. everything he touched turned to gold! even the legendary SEGA of America