Who knows what the future may bring

Marvel Studios' Kevin Feige on the future of Black Panther, Captain Marvel, X-Men — and beyond

What can you tell us about plans for a Black Panther sequel?

Nothing specific to reveal, other than to say we absolutely will do that. One of the favorite pastimes at Marvel Studios is sitting around on a Part One and talking and dreaming about what we would do in a Part Two. There have been plenty of those conversations as we were putting together the first Black Panther. We have ideas and a pretty solid direction on where we want to head with the second one.
Click to expand...

Black Panther 2: Everything We Know About the Potential Sequel

When asked how many more Panther films there are going to be, Feige played it straight. “We always say we work on one movie at a time,” he told Variety. “If you have any good ideas, put it in the movie you’re making. If you don’t, you might not be able to make another one. That said, Panther has been around for more than half a century in the comic books and there are many, many stories to tell.”

Feige also said he “absolutely” hopes Coogler comes back to helm a sequel (if, when). The auteur and Michael B. Jordan-whisperer has already earned rave reviews for his work on the first Black Panther, praised for helming a sprawling, entertaining action movie while also grounding it in something deeper than what underpins most Marvel films.

Coogler, though, isn’t thinking about a sequel himself just yet, telling ET that he’s still focused on promoting the first Black Panther. “That’s all I can talk about,” he said. “That’s all I can think about! We gotta sell the movie and get it out there! That’s where my head is. I’m at the last stage of delivering the baby, you know what I'm saying?”

Of course, though a Black Panther sequel seems imminent, it will take time before we actually see it come to life. Marvel works on a finely plotted release schedule; currently, it’s juggling a handful of upcoming blockbusters like the Spider-Man sequel, Captain Marvel, and the forthcoming Avengers: Infinity War. The studio might even drop a Black Widow movie somewhere on that timeline. All of that means it’ll be awhile before we return to the resplendent bright lights of Wakanda—but return we almost certainly will.
Click to expand...

It may still be some years out and I'll update accordingly, but for now this is just discussion and opinions on what you would like to see next in this franchise. Don't matter if you're a comic head wanting specific villains or a new fan who found things of interest you want further explored.
Last edited: Mar 9, 2018

Exploring the other tribes and keeping it largely in Wakanda (

)?
Or going outside it's borders (

) and meshing more characters from the greater MU like what we saw in Thor Ragnorak?

GR13 said:
white wolf AKA "Bucky with the good hair" all up in this thing for black panther 2 taking the co lead with t'challa wreaking shyt and pulling wakandan dime with ease

Yo, real talk this was the very definition of an Easter egg for those deep in the mythos. For months we done speculated about what capacity Bucky would be in this film, if at all. Most of us guessed post-credit scene, but i dunno if ANYONE saw this coming! And if any of yall did prior to spoilers, then rep on sight b/c that caught me off guard lol

Buck pretty much is a spy/assassin who can go ghost with the best of them.

but they definitely set him up to play a big part of the franchise.

It’s looking like Infinity War is a .5 sequel to Black Panther as much of the fight will take place in Wakanda.

I say after Avengers 3 and 4, they focus on rebuilding Wakanda while a new threat arises from outside to try and infiltrate. 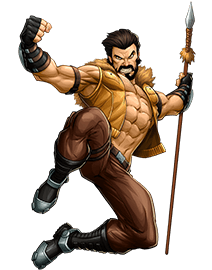 Kraven ingested Calypso's mythical potions, his physiology underwent several changes endowing him with superhuman physical attributes. The powers he gained put him 'on the top of the food chain' as they are even greater than those of Captain America, who is himself considered a pinnacle of human evolution. Kraven is better, stronger, faster and more cunning than any human, coupled with his skills, Kraven truly is a dangerous and deadly adversary. 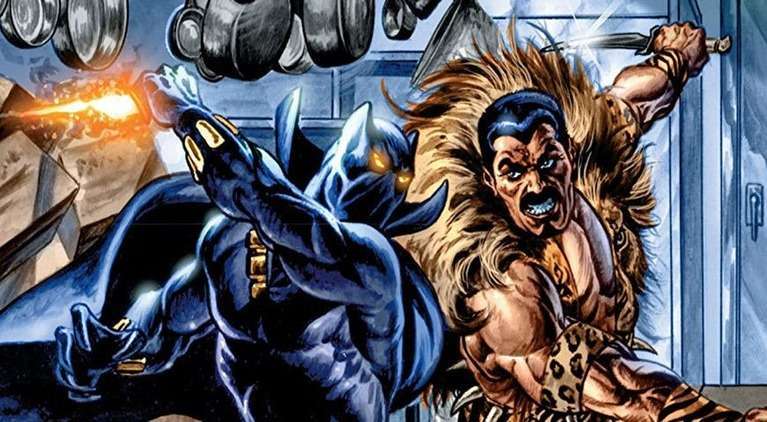 With Wakanda now revealed to the world, the world's greatest hunter should come to play.

Kraven the Hunter is famously a longtime Spider-Man foe, but the villain has squared off against T'Challa in the comics as well — and with both men drawing their superhuman abilities from the jungle, pitting the two against one another makes for a natural pairing.

The obsessed hunter was best known for besting nature's most vicious beasts, and when he ran out of jungle creatures to defeat, he set his sights on superhero Spider-Man as his treasured prey. Black Panther 2 could see Kraven seek out Wakanda in the same manner, hoping to defeat T'Challa and prove himself king of the jungle — what better way to do that than to hunt and best a king?

Coogler hoped to use Kraven in the earliest days of development — until he learned the character's screen rights are held by rival studio Sony, who are rumored to be interested in developing spin-offs staring Kraven and famous Spidey rogue Mysterio.
Click to expand... 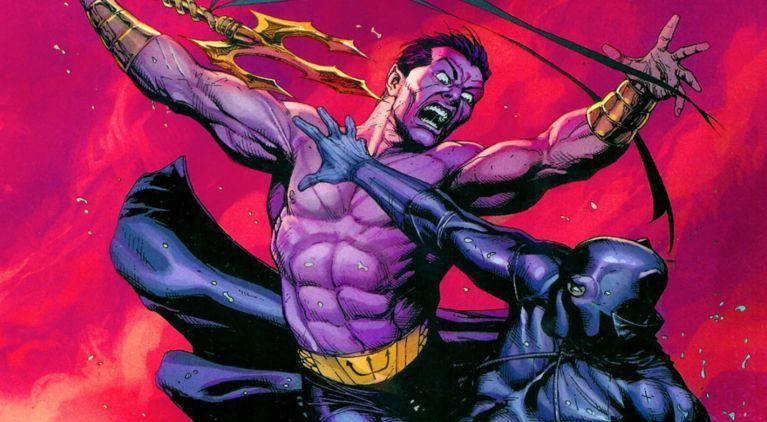 Another longtime Marvel character yet to reach the big screen is Namor the Submariner, who could best be suited to join the Marvel Cinematic Universe in the Black Panther sequel.

T'Challa and Namor are both monarchs, and the pair have a storied history in the comics: they've come to blows more than once, as have their respective kingdoms of Wakanda and Atlantis.

Now that Wakanda is no longer hidden from the world, the sequel could see Wakanda and its people go to war with Namor and his undersea forces — possibly the only beings on Earth who could wage war with Wakanda and have a shot of winning. 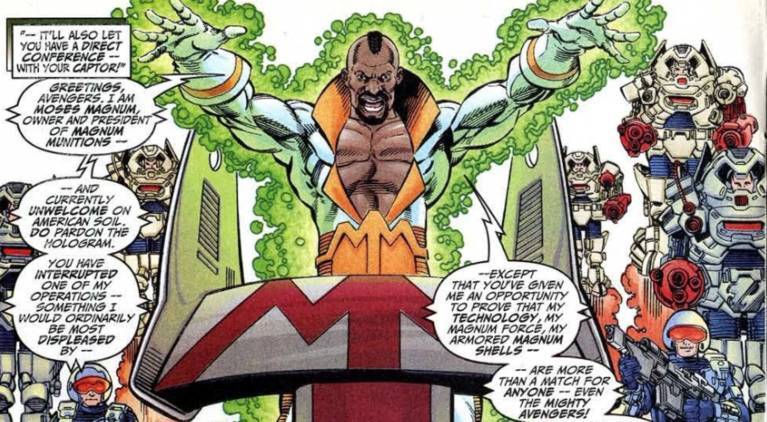 During his time as ruler, Magnum ordered the assassination of T'Challa to force Wakanda into chaos and attempted to acquire Vibranium, a rare and powerful substance found only in Wakanda.

Magnum would also come to possess the ability to generate seismic waves, and could aim devastating vibrations against objects without coming into contact with them.
Click to expand...

Namor would make the most sense. You get to introduce an Asian MCU ”hero" too.
Last edited: Feb 16, 2018

SCJoe said:
Manor would make the most sense. You get to introduce an Asian MCU ”hero" too.
Click to expand...

Yea, after Klaw and Killmonger, they may have to shoot higher than sketchy arms-dealers or another attempted-coup for the thrown.

T'Challa is above the weight class of your typical street level character, plus you gotta figure Shuri will upgrade him with more tech next go around, so he'll need someone either like Namor who is a straight up flying brick.. or some characters with some very interesting powers.

I think Kraven can work as a secondary villain, whose dangerous because of all the traps and things he sets. Though given that he may be tied up in the Sony films, it probably wouldn't be worth the trouble trying to share
J

I’d like to see how Wakanda fares since revealing themselves to the entire world.
L

i can see man-ape being a villain in part 2....yea, they cool in part 1, but since part 2 would be taking place after avengers and the world learning about wakanda, i could see him being upset about t'calla putting them out on front street and going further away from tradition...if not him, i can just see wakanda as a whole reacting to whatever happens in avengers and rebelling against t'calla cause of that....could set up shuri taking over as ruler of wakanda, and him taking over the 'king of the dead' role....

If it keeps me smiling as much as I am now, I can't wait. I will show this to my daughter and copies for nieces and nephews

I think Namor would make part 2 an even more epic movie as they would need to show his kingdom too.

lutha said:
i can see man-ape being a villain in part 2....yea, they cool in part 1, but since part 2 would be taking place after avengers and the world learning about wakanda, i could see him being upset about t'calla putting them out on front street and going further away from tradition...if not him, i can just see wakanda as a whole reacting to whatever happens in avengers and rebelling against t'calla cause of that....could set up shuri taking over as ruler of wakanda, and him taking over the 'king of the dead' role....
Click to expand...

Glad you brought up Infinity War because one thing that was bugging me in the first trailer was the battle sequence when we see all the wakandans charging the thanos' army; because as cool as that looked i was like, there's gotta be more to it than charging these aliens with nothing but scythes and swords..! Yea it was reminiscent of See Wakanda and Die but there was a special reason for that in the comics.

...but now that i've watched the BP movie, it makes perfect sense. They gon be pulling up their energy shields and all types of piffery that hasn't been cgi'ed in yet

And how T'Challa rallies the troops, and the Wakandan's reactiosn to the space fukkery will also be very interesting. Coogler already confirmed that the soul stone is not in Wakandan, but clearly something is attracting Thanos' gang over there.
B

Kraven isn't happening, he's a Sony character. Coolger (in the early stages) wanted to use him, and they were like "nope".
J