US airlines like Delta and United are so desperate for pilots they are dropping some requirements and considering cutting training hours to get more.. 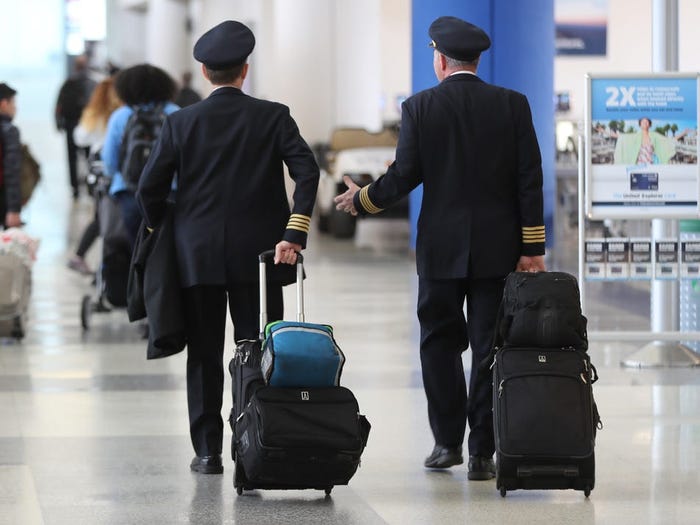 As the pilot shortage continues to rock the airline industry, carriers are struggling to fulfill their flight schedules, and some are even trying to reduce required training hours to get more pilots in the air.

On May 13, Alaska Airlines CEO Ben Minicucci apologized in a YouTube video for continued flight cancellations that have been plaguing the carrier. Minicucci blamed the pilot shortage, saying "we had 63 fewer pilots than what we planned for when we built our scheduled," which caused a "ripple effect."

"By the time we caught this error, April and May schedules were bid on by our pilots and flight attendants, making it impossible to sufficiently adjust schedules to avoid cancellations," he continued.

The Seattle-based carrier is just one example of airlines struggling to find enough pilots to handle the busy post-pandemic travel surge. According to Bloomberg, Delta Air Lines, American Airlines, and United Airlines have all cut regional flying in recent months due to the shortage, with United grounding 100 regional planes over the issue.


"The pilot shortage for the industry is real, and most airlines are simply not going to be able to realize their capacity plans because there simply aren't enough pilots, at least not for the next five-plus years," United CEO Scott Kirby said in a quarterly earnings call in April, per CNBC.

Because of the lack of pilots, carriers are considering changing long-standing requirements to get more pilots flying sooner, like nixing degree requirements, dropping the mandatory number of flight hours needed to be hired, and increasing the pilot retirement age.

In January, Delta announced it would end the requirement for pilots to have a four-year degree, saying there are qualified candidates "who have gained more than the equivalent of a college education through years of life and leadership experience."

Regional carrier Republic Airways, which operates on behalf of Delta, American, and United, is trying to reduce its pilot training requirements. In April, the airline asked the Federal Aviation Administration for permission to hire pilots out of its training academy when they reach 750 flight hours instead of the 1,500 hours currently required for most pilots.


There are already hour exemptions in place for trainees with two or four-year degrees that reduce the required hours to 1,250 and 1,000 hours, respectively, according to The Points Guy.

Regional airlines are particularly impacted by the shortage as the mainline airlines scoop up their pilots. Mesa Airlines CEO Jonathan Ornstein told CNBC it takes 120 days to replace a pilot who gave their two weeks' notice to work for a bigger airline, and that the carrier could "use about 200 pilots."

In addition to reduced training and education requirements, Senator Lindsey Graham (R-S.C.) could propose a bill that will increase the mandatory pilot retirement age from 65 to 67, reported aviation trade publication Airline Weekly. The move would be an attempted fix to the shortage, allowing pilots to stay on with their company for longer before being forced to retire.

"Optically, cutting the number of required flying hours may look like a riskier approach than allowing a healthy pilot to continue flying a few more years," Henry Harteveldt, travel analyst and president of Atmosphere Research Group, explained to Insider.

"What's critical, though, is for the FAA to promptly sit down with the airline industry to discuss these," he continued. "The airline industry literally doesn't have time for the FAA to drag out these discussions. We have seen route networks and airline schedules cut due to the lack of pilots, inconveniencing passengers and communities, and contributing to higher airfares."
B

In addition to reduced training and education requirements, Senator Lindsey Graham (R-S.C.) could propose a bill that will increase the mandatory pilot retirement age from 65 to 67, reported aviation trade publication Airline Weekly. The move would be an attempted fix to the shortage, allowing pilots to stay on with their company for longer before being forced to retire.
Click to expand...

more Boeings bout to be dropping out the sky...

hope you don't live near an airport

Playa from the Himalayas #ByrdGang

Didn’t they retire a bunch during Covid? This is on them.

This is insanity.... Pilots get paid $$$ and they having a shortage?!?

The Brotha's Got His Own Money

Not an easy answer here, but they are just going to have to recruit from retired military pilots (which is standard protocol).

Mr. McDowell said:
Not an easy answer here, but they are just going to have to recruit from retired military pilots (which is standard protocol).
Click to expand...

This is so scary, they’ll end up like Russia in no time

Every place is short on people. Everyone has too much money.

Mr. McDowell said:
Not an easy answer here, but they are just going to have to recruit from retired military pilots (which is standard protocol).
Click to expand...