Warner Music Group is launching a metaverse concert hall where you can pay to be its neighbor
Adi RobertsonJan 27, 2022, 11:01am EST 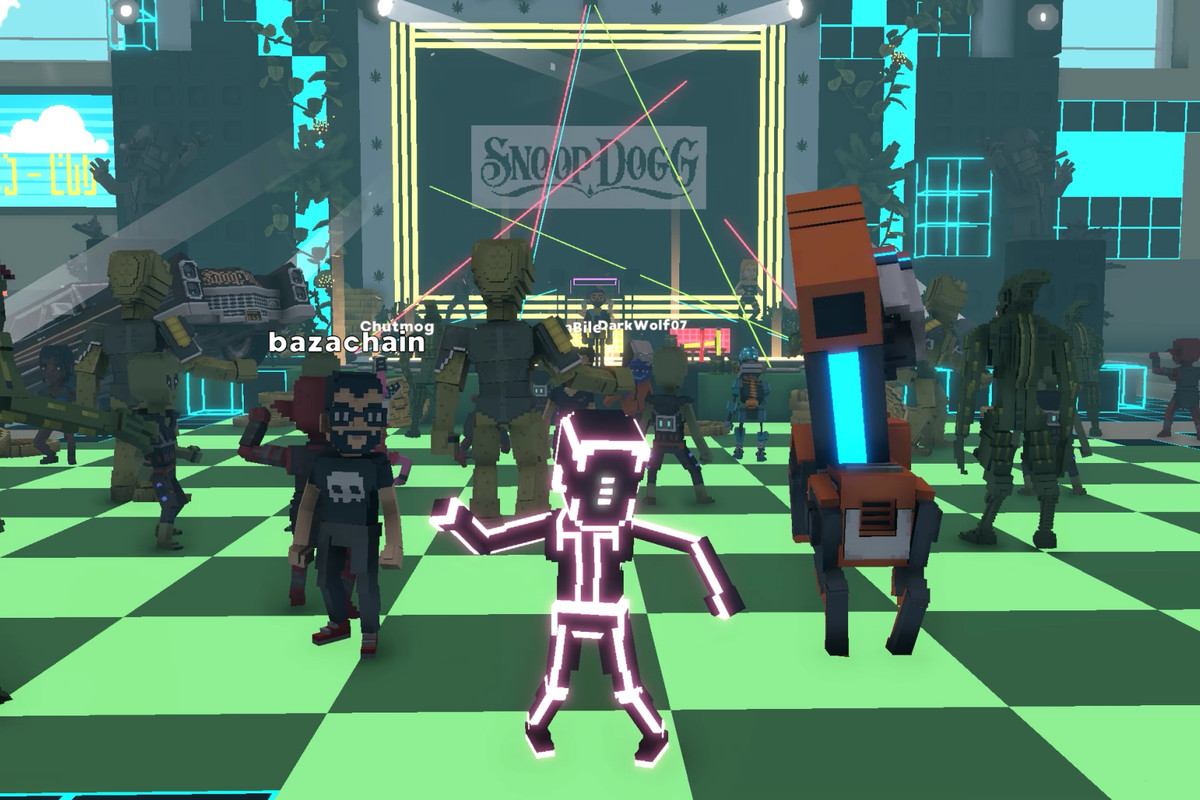 A Snoop Dogg experience inside The Sandbox.
The Sandbox
Warner Music Group will open an outpost in virtual world The Sandbox, and it hopes music buffs will express their fandom by acquiring nearby property. In an announcement, WMG described its new home as a “combination of musical theme park and concert venue.” It will work with The Sandbox to host concerts and other “musical experiences.” But so far, it’s only discussed one specific event: a special sale of digital real estate called Land, which Sandbox users can buy “coveted” plots of in March.

Unlike all the platforms above, though, The Sandbox is built around blockchain and non-fungible token (or NFT) technology. It’s particularly concerned with ownership and letting players monetize in-game resources, a key piece of what is sometimes dubbed the “metaverse.” Along with the similar platform Decentraland, it’s led a recent push to make virtual land a hot commodity, although some observers are skeptical of the phenomenon. Regardless of the larger business strategies in play here, at least you can make one good argument for becoming virtual instead of real neighbors with a concert venue: if the music gets too loud, you can just turn your computer off and go to sleep.

Slimkid07 said:
One of my guys in a private chat just dropped this article

'Snow Job': The Plot to Hand the Crypto Industry to the Big Banks - Decrypt
Click to expand...

Thing they don't realize is they may get the general public with these stable coins, but! It's so many more stables and I feel like as the older boomer and x generations fade out over the years the younger generations will gravitate towards other stables on other platforms for better yeilds and rewards (like liquidity pools for one)

One thing I'm not worried about with the government is their INCOMPETENCE. These mf barely put in work for Jack shyt and don't know how to run anything correctly, I mean shyt they can't even be greedy without literally killing millions of people through bankrupting the economy, there's no way they can handle this crypto shyt, it's literally a global digital gold rush they underestimate the shyt out of this space.

Slimkid07 said:
One of my guys in a private chat just dropped this article

'Snow Job': The Plot to Hand the Crypto Industry to the Big Banks - Decrypt
Click to expand...

I haven't read this yet, but the FDIC was used to suppress black banks after the New Deal as well. The parallels between what's going on now with crypto and the early days of the banking industry are interesting. One of the things the FDIC did to shut out a lot of black banks from being insured back then was with the liquidity/capital requirements that had to be met. I assume that's what the game will be this time as well, this is definitely an interesting time with regulation for sure.

How they gonna create a stable coin if they already control what the main pairing for every crypto coin is?

They gonna have USD/ US stable coin trading on the banks websites? Am I gonna log in to CB and get to choose between USD and US stable coin when trading? I would understand a digital dollar but nearly everyone is using digital dollars and not just in crypto. The fintech boom, especially since covid, has been enormous. PayPal, zelle, cash app, etc. Even before that. I been using credit cards or my debit card for years. Rarely if ever use cash. Even paying bills everything is automatically debited from your account. So I don't understand how they can create a stable coin that does the same thing as their currency which people are already trading with.

Not like the banks are gonna give us better interest rates than DeFi.

Gotta be careful, the stable coin might be a rug pull considering who's behind it.

Long thread about UST and the FUD that's been swirling up around it recently...

I Really Mean It said:
Probably want to turn it over to Wall Street, so hedges can manipulate it to the detriment of regular investors, just as they do with stocks.

Of course, crypto probably need regulation but it'll never be regulation in favor of regular traders, dems are all about big corporations and big finance, with a sprinkle of diversity to gaslight us into thinking they're doing everybody a favor.


Please never take my critiques on dems as a co-sign to republicans, they're even worse in may regards

Great thread on UST. Even if rates go down a bit, still better than what banks give. Even with online banks that were giving better rates than brick and mortar, still can't compete cuz the online banks are tied to the US while crypto is global. Access to more people means more money circulating and being borrowed and earning interest. Even at an 11.5% loan, that's still better than practically most credit cards especially if your score isn't great. Of course don't know how much they would let each person borrow. Even a loan that is then placed in the 19.5% pool would still be a winning bet. Not too mention it's rise to second behind eth in tvl which helps boost its confidence.

Anyone else looking at $GLMR? Starting to look good at these price levels

Fly said:
Anyone else looking at $GLMR? Starting to look good at these price levels
Click to expand...

I've been keeping an eye on that one as well as the DeFi opportunities for it too.

Another 2400 dip ate. And a decent run back up. Hopefully 2700 reached soon enough but the bottom looks to be in. Take any advantage under 2400 cuz looking like eth doesn't like being under that price for long.

is cro the real deal? i know crypto.com is promoting the hell out of it and lebron just came aboard

Pancakebunny got hacked again and this time I lost QBT and a solitary BNB.
Mother f...