Yo good looking out breh I wish I could rep you. Between work and taking my daughters to their sports I sometimes miss out on shyt.

Just watched the last three matches, they were actually good. But damn, this shyt ended at 12:30

Running it back with Adam Cole definitely dampened Page's reign. The right man won but let's not make it a long run.

I don't care who takes it but Jurassic Express needs to come off them belts.

DoubleJ13 said:
Interested to see how Rush does, that motherfukker hates jobbing so that could be a shyt show if Andrade can't keep him in check

Where are you getting this from? Iv never heard of him having a problem with jobbing?

Silkk said:
If you gonna do it then do it bytch ass nikka

Silkk said:
Punk is NOWHERE near as good/hot/over as BD was when he was challenging for it.....


But whatever. They had to do it because the rest of the show was complete shyt.
Click to expand...

I understand AEW is only 3 yrs old so it’s not gone all be perfect. But they gone have to make someone drop the belt on their first defense at some point so a new champ first challenger don’t have such a predictable outcome. I think that was the perfect chance to do it.

I like Hangman and his finisher is dope but his reign as champ was forced and boring.

MJF/Wardlow was what it should be, given the situation. Entertaining squash match. Get the match in the ring, come up with a way to write off MJF, and figure out where things go from there. If he legit wants to go, let him. I wouldn't bother putting up with the headache for the next year and a half, if I was TK.

I expected more from Bucks/Hardys, despite knowing both Hardys are washed. It was alright, but we don't need a rematch. Jeff was moving in slow motion. Matt would be great in a backstage role, Jeff should go home.

House of Black vs. Death Triangle was great. I'd like to see a rematch. I've enjoyed the angle with Julia Hart. Just not sure what you do with her now. She's still very green, and has no obvious opponent. Will she just be a valet? I think everyone in House of Black deserves a big singles push.

I tuned out of the Cole/Joe match. Adam Cole sucks. Dude is open new tab status.

Men of the Year & PVZ vs. Sammy, Kaz & Tay... The booking for all of these guys has been terrible for a long time. They all deserve better, especially Ethan Page. I hope that's the end of this feud.

Anarchy in the Arena was good. Not as enjoyable as Stadium Stampede, but chaotic fun. There was just so much going on and AEW's production crew sucks enough as it is. They were missing a lot of spots.

I'm disappointed Jungle Boy & Luchasaurus didn't drop the belts. I think that team has run its course. Starks & Hobbs should get a run.

Page/Punk was very good. I think Punk winning is the right call. Page's run has been underwhelming outside of his matches with Danielson. It feels like he's a part-timer anyway and never really the focus of any show. Punk has been having a great run since returning.

I think the show was good overall, with HoB vs. Death Triangle being my favorite match.

I've watched the show last night, but didn't live post with y'all, however, the show and the Celtics/Heat Game 7 had me very sports entertained throughout the night

Thunder Rosa and Serena Deeb need to be given their flowers for putting out an banger last night.

Go hit the slots with ur wife p*ssy…remember to look over ya shoulder in case her ex man runs up on u again…..oops my bad the coli doesnt know that :/ 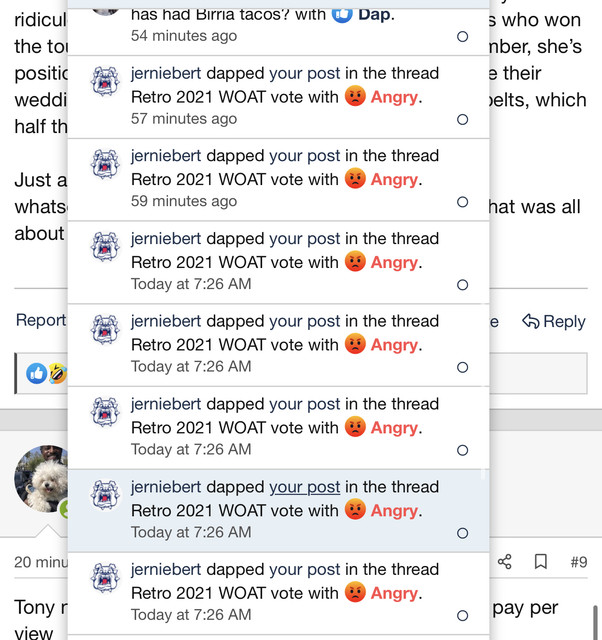 WOATs going to WOAT. Ladies and Gentlemen your 2021 WOAT the scared little bytch.

Tell me im lying…about u being chased down

Max. said:
“He chased us down and i beat him up…ive only been in one fight ever - jerniebert”
Remember when I brought it up months ago and u got realllll quieeeet

Tell me im lying…about u being chased down
Click to expand...

Ur heart was pounding when bro was chasing u

I just logged on and he did the same shyt to me. Buncha angry faces all the way down. Has the nerve to try to shame others, but Stays following every person who voted for him handing out angry caps like a child. Loser ass mu fukka.

The Collector said:
I just logged on and he did the same shyt to me. Buncha angry faces all the way down. Has the nerve to try to shame others. Loser ass mu fukka.

He's the WOAT and a scared little bytch for a reason. WOATs only know how to WOAT.

Monday at 1:08 AM
Larry Legend

[8/24] AEW Dynamite: Look at the Dirtsheets, what do you see? BattleBots and Nonstop Backstage Controversy!
78 79 80